PwC Canada and CB Insights have released the MoneyTree report on Canadian investment trends for the second half and full year of 2019. All figures are in USD.

“Increased competition for funding from global investors has created a healthy funding environment for Canadian startups.”

This year saw venture capital (VC) funding rise to a record-setting $4.1 billion. Although Canadian funding experienced an 11 percent decline in deal count last year, the report tracked a 16 percent increase in year-over-year funding. Some massive rounds from last year were not included in this year’s report, including Verafin’s round, as the company did not disclose the debt and equity break out, and Sonder’s $210 million raise as the company is now headquartered in the United States.

Artificial intelligence companies saw increased investor attention in 2019, investment in Canadian AI companies more than doubled in the second half of 2019.

This doubling of investment in the sector represented a 176 percent half-over-half increase compared to the same period in 2018. Although there was a jump in dollars invested, there was a slight decline in deal count, which the report said reflects the rise of larger deals in the sector. Element AI’s $200 million CAD Series B was among the top five largest VC rounds of the year.

“Deal share by stage to Canadian AI startups suggests the ecosystem is maturing, as a number of companies have progressed from seed- to early- to expansion-stage over the past few years,” the report noted.

FinTech companies also saw a striking rise in funding, as well as deal activity, raising $776 million in 2019, a 104 percent boost from 2018. Deal count in the FinTech sector rose to 59, up 11 percent year over year.

“There’s a strong link between well-funded FinTech companies and strategic channels [and] partnerships with the larger banks,” said Eugene Bomba, partner at the national technology sector at PwC Canada.

The cybersecurity sector also had a strong year, with $398 million deployed across 19 deals.

“Consistent with global trends, 2019 was a record year for cybersecurity funding in Canada alongside rising deal activity,” said Sajith Nair, partner at cybersecurity and privacy at PwC Canada. “From the protection of personal identity to critical company assets, funding to cybersecurity continues to rise as organizations and executives grasp the importance of preventative and detective measures in order to avoid a major crisis and build digital trust.

“The complexity of payer models and procurement cycles in digital health continues to be a challenge to growth and adoption in Canada,” said Cameron Burke, managing director of the technology sector at PwC Canada. “The fact that health and wellness made up over 50 percent of H2 2019 deals reflects that complexity and capital is going towards a simpler growth strategy.”

RELATED:Procurement could be Canada’s biggest barrier to commercializing healthtech innovation

Toronto companies saw larger deals taking place as funding increased one percent in 2019 despite a three percent decline in deal activity. Companies based in Toronto continued to receive the most deals relative to other Canadian markets, although deals to the region saw a slight downtick in H2 2019, returning to levels seen in H2 2018.

Although Toronto funding won out for the second year in a row, British Columbia also saw record funding in 2019. Driven by larger deals, the western province saw a 133 percent increase in total funding when compared to 2018. 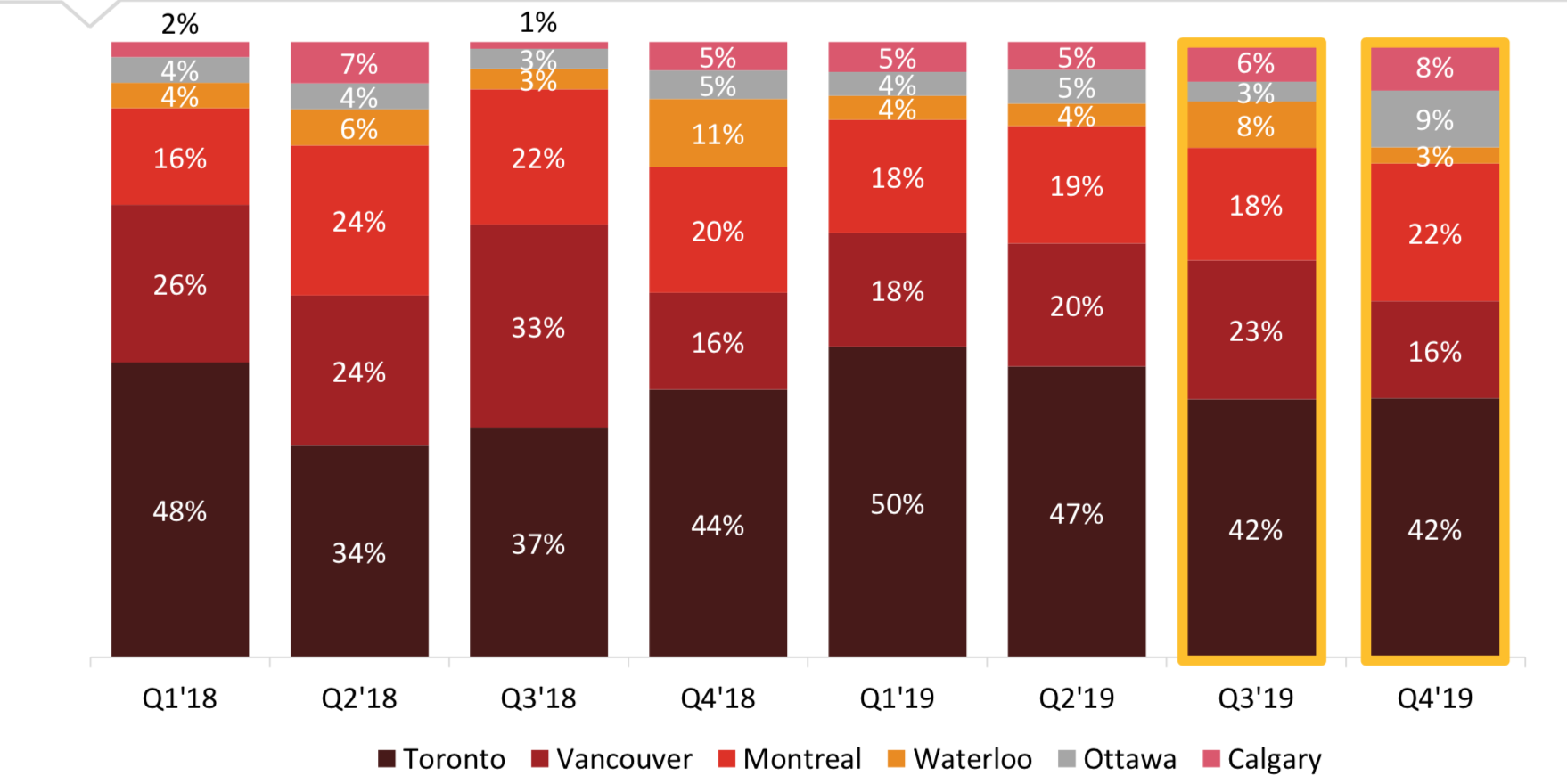 Other notable markets included Vancouver, which saw a 134 percent increase from the year before, with $931 million raised over 72 deals. Last year’s Vancouver-based Clio raised a $330 million CAD Series D, meaning that round accounted for approximately 27 percent of the city’s funding, according to data provided by the MoneyTree report. In Calgary, 2019 deal activity increased from five to 22 deals, while funding rose to $132 million, a six percent increase compared to investment levels in 2018, Ottawa raised $119 million in 2019.

Seed and early-stage investments comprised the lion’s share of deals in H2 2019. The report stated that deal share by stage has remained relatively consistent over the past few quarters, with the majority of deals going to seed and early-stage companies. 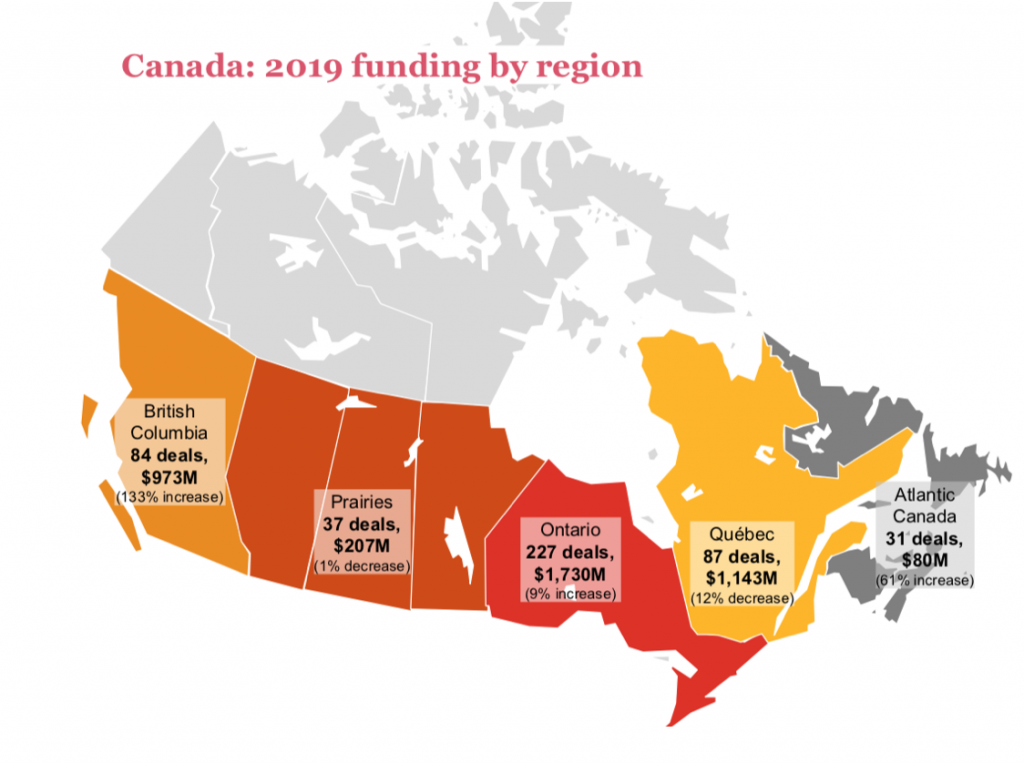 Funding by region in 2019 (Source: PwC and CB Insights)

#AI #CB Insights #Cybersecurity #Fintech #PwC Canada #PwC MoneyTree #VCs
StartUp HERE
Tweets by startuphereTO
"A culture of collaboration is really at the heart of what’s next in innovation. What’s exciting in Toronto is that we have local and international businesses partnering with the startup ecosystem and increasingly with the academic community to position themselves for success in the future. And it’s happening across the spectrum from digital media and information technology, to life sciences and healthcare, energy solutions and social innovation.”

Dr. Ilse Treurnicht, Former CEO, MaRS Discovery District
"Startups in Toronto benefit from support at every stage. From the very early stage we have incubators, accelerators and seed stage investors. In the growth stage, we have funders willing to invest a lot of money to really help a company take-off. This gives tech companies in Toronto a huge advantage.”
Allen Lau, CEO & Co-Founder, Wattpad
"If you come to our studio and take a look at the people sitting around the table discussing ideas, they’re from almost every part of the world. I think it has really helped Umbra create an international style.”

Paul Rowan, Co-Founder, Umbra
“The scale and quality of meet-ups and conferences and speaking events have gone up dramatically. You don’t need to leave Toronto to build a successful company.”
Evgeny Tchebotarev, Co-Founder, 500px
“Something that makes Toronto truly unique is that willingness to share and communicate with people very openly inside the industry looking at the global pie as something we can all co-create and achieve together.”
Satish Kanwar, VP of Product, Acceleration, Shopify
“I think it’s an attractive place to come for talented people, it's a huge market for creative people and I think there are some companies emerging that give people hope that it can be done here.”
Mike McDerment, CEO/Co-Founder, Freshbooks
“In Toronto, Bombardier manufactures business and commercial aircraft and relies on the diversified, local regional supply chain. We work with more than 70 suppliers located in the Greater Toronto Area and we benefit from a variety of expertise going from complex machining to systems integration.”