BDC Capital is considering extending its investment matching efforts to include angel investors and angel-backed startups that have been affected by COVID-19, BetaKit has learned.

“Angels are in every province, every community across the country and so angels have reach where venture capital doesn’t.”

Multiple sources with knowledge of BDC’s efforts have confirmed to BetaKit that the organization is exploring the possibility of offering matching investments to the angel community.

The news follows the recent launch of the BDC Capital Bridge Financing Program for venture-backed companies.

BetaKit has learned that Alison Nankivell, BDC vice president of fund investments and global scaling, who leads the committee for the matching program, would also oversee the new angel initiative. Nankivell did not respond to multiple requests for comment.

A BDC spokesperson told BetaKit that BDC Capital “will match investments from a syndicate which would include qualified venture fund firms along with angels investors.”

It is unclear from the above statement, however, if BDC will match all syndicate investments or only those that include qualified venture firms. It should also be noted that BDC’s statement likely refers to syndicates only as co-investment rounds in a startup and not the more colloquially usage for special purpose vehicles (SPVs) set up as single-deal funds (AngelList Syndicates being a common example). BDC’s spokesperson was unable to clarify at time of publication.

Sandi Gilbert, managing partner of InterGen and board chair at the National Angel Capital Organization (NACO), confirmed conversations have taken place between BDC and the industry association for Canadian angel investors about expanding the Bridge Financing Program to be more inclusive of angel investing.

“There is no program yet,” she told BetaKit, adding, however, that NACO has “had good conversations with BDC on how to make that work.”

Multiple sources that spoke to BetaKit over the past week said BDC was still in the early exploration stage and did not have clarity on how the program would be run. They noted that BDC could relax the current criteria, or implement a net new program.

As it currently stands, the Bridge Financing Program is available to venture-backed companies that have raised at least $500,000 in external capital. The three components of the program include investing alongside venture firms, accelerating more capital into General Partners (GPs), and increasing BDC’s co-investment activity.

BDC Capital is working with the Canadian Venture Capital and Private Equity Association (CVCA) to help source potential investments. BDC Capital has yet to make a public announcement about the program, leaving the CVCA to spread the word through its network. Multiple sources within the venture community have expressed concerns to BetaKit that BDC’s venture partners and CVCA members are more likely to receive the matching investments. CVCA said the BDC program is open to both existing and new investors.

One source with knowledge of BDC’s efforts around angel matching indicated that NACO is in talks with BDC to help administer matching investments for angels. The organization could potentially play a role in accrediting angel members that would then qualify for matching investment, the source said.

“It’s us putting our heads together to try to figure out what’s the best way to operationalize a solution.”

In a recent interview, NACO CEO Claudio Rojas would not confirm to BetaKit the role NACO might play, but confirmed conversations between the two organizations to extend the Bridge Financing Program to the angel community.

“It’s us putting our heads together to try to figure out what’s the best way to operationalize a solution that gets the entrepreneurs the access to capital that they need,” Rojas said. “In those talks, there was a recognition that angels are in every province, every community across the country and so angels have reach where venture capital doesn’t.”

Rojas would also not confirm if BDC is considering expanding the criteria of the current program or implementing a new program specifically for angels, but said given NACO’s national reach it would be well suited to support BDC in its efforts. 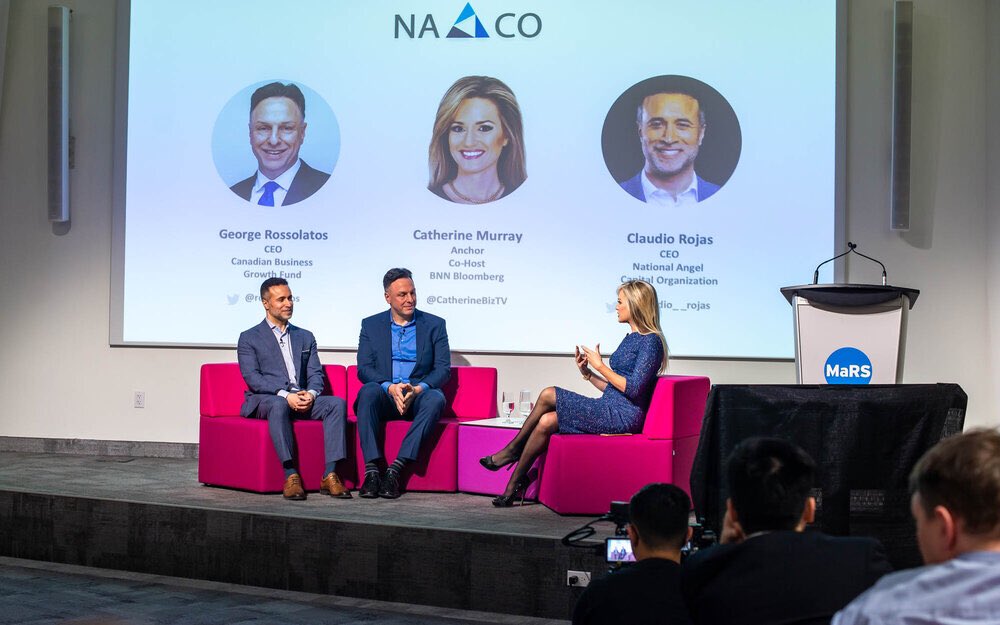 During a virtual roundtable hosted by NACO last Thursday, Rojas applauded the work BDC has done, noting how quickly it has implemented programs. He added, though, that the matching program focusing specifically on VC-backed companies was of concern to the angel community, and highlighted the importance of giving angels access to a similar program.

RELATED: Here are the final details on the Canada Emergency Wage Subsidy

VCs lose out if angels are not supported, Rojas said during the roundtable, noting that angel investors create a funnel for VC investment. “It is important to drive home the point to look at this from an ecosystem perspective and appreciate what the funding funnel looks like,” he said.

Jordan Dutchak, executive director at Saskatoon-based incubator Co.Labs, who partook in the NACO meeting, called an angel matching program essential. Dutchak who works with NACO on a volunteer basis said many of the companies Co.Labs supports are not eligible for venture capital.

Gilbert echoed a similar point to BetaKit, noting that in provinces like Alberta many companies would not qualify under the BDC matching program as it currently stands.

Dutchak emphasized the need to utilize existing angel networks to help the federal government “passively deploy” capital on a matching basis. By using provincial angel mechanisms, BDC could potentially work with angels to unlock capital through matching, similar to GPs and LPs, he said.

“It moves slower because of all the complexity and the interplay between all the different stakeholders.”

Gilbert said based on her conversations with BDC, the Crown corporation investor is trying to determine criteria that would allow angel investors to be part of an investment matching program. She acknowledged that it’s easier for BDC, from a process standpoint, to work with VCs due to existing relationships.

“When it comes to super angels or angel groups or angel funds, [BDC doesn’t] have that relationship with [them], so you can see why they’d be going, ‘how are we going to do that,’” she said.

“The challenge I’d say with the angel communities that we have is there’s so many of them all over the country, the challenge is how do you operationalize that,” said Rojas.

Significant angel investors that BetaKit spoke with, including Gilbert, said one problem with angel investing rather than venture capital is how to qualify individual angel investors. It can get “really grey”, Gilbert said, noting that being a NACO member could go a long way in helping BDC determine who gets matching dollars.

“It’s not that they don’t want to do it,” Gilbert added. It’s about putting in place a process that is “clear [and] very black and white,” she said, noting that such a process would allow BDC to qualify the angel investor or funds that would be eligible.

Gilbert said NACO’s recommendation to BDC is that half a million dollar investments minimum made by angel investors (individual or fund) qualify for matching dollars.

“We realize this program will not support every start-up,” a BDC spokesperson told BetaKit. “It is not designed to.”

“In addition to the new program, BDC Capital will accelerate more capital into General Partners across the country through its existing Funds investments program and increase our co-investment. We are here for entrepreneurs, and are working with our partners, to help them through these trying times.”

Both Rojas and Gilbert said they are confident BDC will implement some form of measures that will allow for matching investments to angel investors and angel-backed companies.

“I think BDC has been doing a phenomenal job and they’re moving so rapidly that it made a lot of sense that they follow the steps that have already been announced,” said Rojas.

“That [process] makes a lot of sense as opposed to developing a policy that pleases everyone,” he added. “But it moves slower because of all the complexity and the interplay between all the different stakeholders involved.”

More details on BDC Capital’s Bridge Financing Program are set to be shared with GPs and venture funds through the CVCA this week. Sources have indicated to BetaKit that news on the angel matching may come in the following weeks.

BDC confirmed with BetaKit that the Bridge Financing Program is supported by internal resources and did not receive new investment from the federal government for its venture capital activity. BetaKit spoke to one source with knowledge of the program who put the overall program cost at approximately $150 million.

UPDATE (16/04/2020): This story was been updated to clarify that the CVCA is not administering the Bridge Financing Program, but acting as a network connection for its members and BDC Capital.

#BDC Capital #NACO #VCs
StartUp HERE
Tweets by startuphereTO
“In Toronto, Bombardier manufactures business and commercial aircraft and relies on the diversified, local regional supply chain. We work with more than 70 suppliers located in the Greater Toronto Area and we benefit from a variety of expertise going from complex machining to systems integration.”

Dr. Ilse Treurnicht, Former CEO, MaRS Discovery District
“The scale and quality of meet-ups and conferences and speaking events have gone up dramatically. You don’t need to leave Toronto to build a successful company.”
Evgeny Tchebotarev, Co-Founder, 500px
"Startups in Toronto benefit from support at every stage. From the very early stage we have incubators, accelerators and seed stage investors. In the growth stage, we have funders willing to invest a lot of money to really help a company take-off. This gives tech companies in Toronto a huge advantage.”
Allen Lau, CEO & Co-Founder, Wattpad
“I think it’s an attractive place to come for talented people, it's a huge market for creative people and I think there are some companies emerging that give people hope that it can be done here.”
Mike McDerment, CEO/Co-Founder, Freshbooks
/