Home
Close Menu
Get Social with Us
Canada Learning Code Receives $117,000 Because the Raptors Stomped the Warriors

Canada Learning Code has received $117,149 because the Toronto Raptors beat the Golden State Warriors in the NBA Finals, bringing home the championship trophy to Canada for the first time in NBA history.

The funding came about because two tech organizations, TechToronto and San Francisco-based sf.citi, launched #TechBet ahead of the NBA Finals. The initiative was devised as a way to celebrate the NBA Finals, while challenging local tech entrepreneurs, in two of North America’s biggest tech hubs, to raise money for charity.

If the Raptors won, TechToronto pledged to support Canada Learning Code, if the Warriors had won, sf.citi would have provided the money to Circle the Schools, an organization that aims to help students prepare to live, work, and thrive in the Bay Area. Unfortunately for the Bay Area, the Raptors beat the Warriors on their home court throughout the Finals, with the final three games ever to be played at Oracle Arena resulting in losses.

“Canada Learning Code is honoured to receive the support of #TechBet to create a lasting impact from the Toronto Raptors championship with a legacy beyond the basketball court,” said Melissa Sariffodeen, co-founder and CEO of Canada Learning Code. “This contribution will help us reach more communities coast-to-coast to help us continue to empower youth to be builders, and not just consumers, of technology.”

The #TechBet sought to bring together tech leaders from both cities to support their local teams. TechTO and sf.citi put up the first $10,000 for each city and challenged their local technology communities to raise the stakes to $100,000. The organizations managed to surpass their target by more than $17,000, similar to how Kyle Lowry outscored the Warriors 11-2 by himself in the opening minutes of the deciding Game 6. Lowry finished with a heroic 26-10-7 statline. 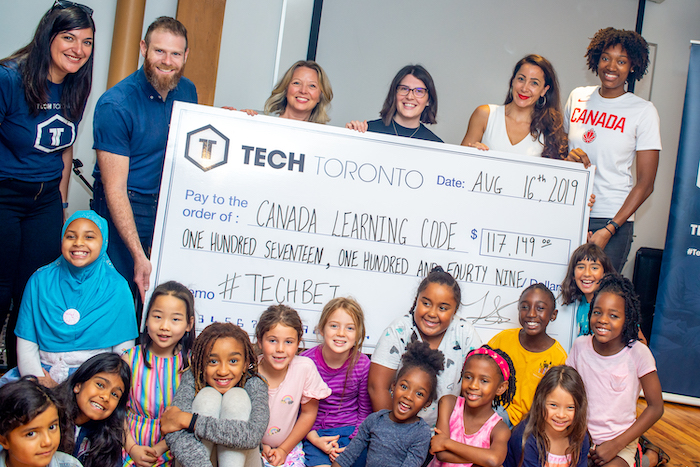 “Inspiring some friendly rivalry between tech leaders in the Bay Area and Toronto, the TechBet between sf.citi and TechTO united our communities around an important cause,” said Jennifer Stojkovic, executive director of sf.citi. “Even though we were disappointed to see the Warriors break their winning streak, we know all donations are supporting future tech talent through Canada Learning Code. On this bet, there was really no losing.”

“I am proud that the Raptors won and even more excited that the tech community raised over $100,000 for Canada Learning Code,” said Alex Norman, co-founder of TechToronto. “This will help make our community more accessible and inclusive.”

#Canada Learning Code #TechToronto
StartUp HERE
Tweets by startuphereTO
“I think it’s an attractive place to come for talented people, it's a huge market for creative people and I think there are some companies emerging that give people hope that it can be done here.”
Mike McDerment, CEO/Co-Founder, Freshbooks
"A culture of collaboration is really at the heart of what’s next in innovation. What’s exciting in Toronto is that we have local and international businesses partnering with the startup ecosystem and increasingly with the academic community to position themselves for success in the future. And it’s happening across the spectrum from digital media and information technology, to life sciences and healthcare, energy solutions and social innovation.”

Dr. Ilse Treurnicht, Former CEO, MaRS Discovery District
“Something that makes Toronto truly unique is that willingness to share and communicate with people very openly inside the industry looking at the global pie as something we can all co-create and achieve together.”
Satish Kanwar, VP of Product, Acceleration, Shopify
"If you come to our studio and take a look at the people sitting around the table discussing ideas, they’re from almost every part of the world. I think it has really helped Umbra create an international style.”