Ottawa-based accelerator L-Spark has released the results of its annual State of Canadian SaaS report, which found that Canadian SaaS companies received a cumulative $5.13 billion in capital investments in 2019, a 213 percent jump from the previous year.

The annual report looks at broad trends and figures, industry highlights, investments, valuations, and acquisitions for the Canada’s software companies. In total, there were 183 companies involved in 206 deals with 298 investors. The average deal size in a Canadian SaaS company reached $43 million, up from $10.3 million in 2018.

In L-Spark’s 2018 report, Canadian SaaS companies pulled in $1.62 billion over 229 deals. While the number of deals decreased, this year’s capital surpassing $5 billion represents an increase of $3.51 billion invested over the past year. This surpassed last year’s predictions, with some expecting to see $4.1 billion invested in 2019.

Ontario continues to receive the highest volume of deals and capital, with $1.78 billion in 99 deals. BC came in at $1.23 billion over 43 deals, with Alberta following at $870 million in 16 deals, and Québec’s investments totalling $756.6 million in 26 deals.

Alberta’s jump past Quebec indicates a year of impressive growth for the province, where startups like Benevity, Attabotics, and ZayZoon, all raised eight-figure rounds. 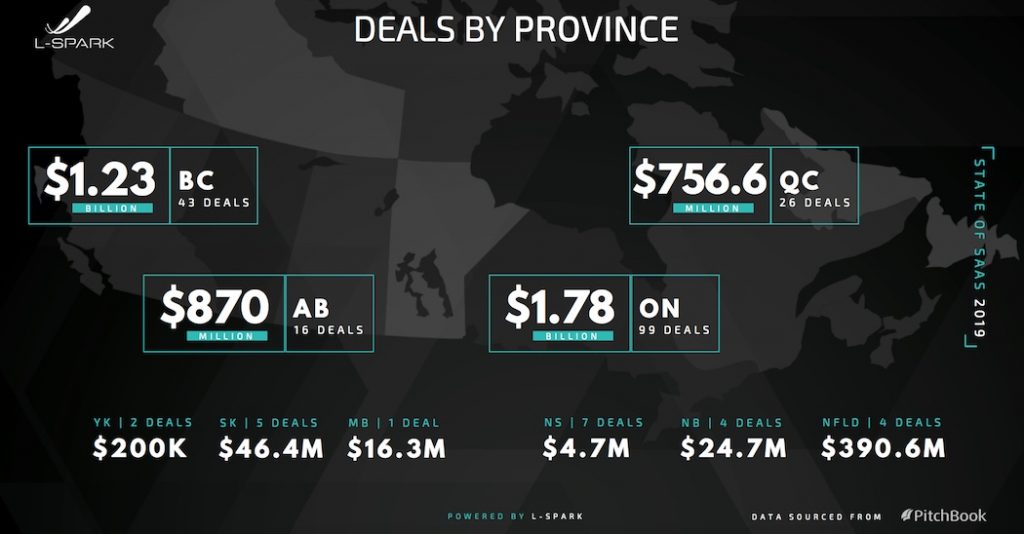 RELATED: The State of Canadian SaaS

The average deal size for 2019 was $43 million according to the report, compared to $10.3 million in 2018. Of that, ten Canadian SaaS companies raised $50 million or more each, accouting for $4.41 billion of the total investments in Canadian SaaS companies in 2019. Among these companies were Trulioo, Clio, Lightspeed, and Element AI. This supports an emerging trend in Canada, defined by massive venture rounds.

L-Spark’s report also highlighted some of its own activities from this year. The organization has accelerated 51 companies to date, with over half of its companies raising follow-on funding totalling over $45 million. The release of the report coincides with L-Spark’s annual SaaS North conference, where founders, investors, and executives from the sector gather to examine the state of SaaS in Canada.

Not joking around: Toronto stand-up comedians experiment with NFTs

Graham Kelly, Vice-President, Global Operations & Toronto Site, Bombardier Aerospace
“Something that makes Toronto truly unique is that willingness to share and communicate with people very openly inside the industry looking at the global pie as something we can all co-create and achieve together.”
Satish Kanwar, VP of Product, Acceleration, Shopify
“I think it’s an attractive place to come for talented people, it's a huge market for creative people and I think there are some companies emerging that give people hope that it can be done here.”
Mike McDerment, CEO/Co-Founder, Freshbooks
"Startups in Toronto benefit from support at every stage. From the very early stage we have incubators, accelerators and seed stage investors. In the growth stage, we have funders willing to invest a lot of money to really help a company take-off. This gives tech companies in Toronto a huge advantage.”
Allen Lau, CEO & Co-Founder, Wattpad
"A culture of collaboration is really at the heart of what’s next in innovation. What’s exciting in Toronto is that we have local and international businesses partnering with the startup ecosystem and increasingly with the academic community to position themselves for success in the future. And it’s happening across the spectrum from digital media and information technology, to life sciences and healthcare, energy solutions and social innovation.”

Paul Rowan, Co-Founder, Umbra
“The scale and quality of meet-ups and conferences and speaking events have gone up dramatically. You don’t need to leave Toronto to build a successful company.”
Evgeny Tchebotarev, Co-Founder, 500px
/