Returning to Toronto for its second year, #movethedial brings together thought leaders, partners, and amazing humans of all identities to connect, learn, and grow.

Their unique panel will bring together Dagher and her daughter, Stephanie Aoun, a Marketing Manager at RBC, along with Ahmad and his daughter, Hana Ahmad, a innovator at The Knowledge Society. The discussion will highlight generational tech differences and the need for more diverse women to join the tech workforce.

Ahmad is no stranger to supporting the success of women in tech, having been Dagher’s mentor earlier in her career. He was clear that men should play an active role.

According to Ahmad, representation of a multigenerational women workforce equals better innovation. This is why he believes encouraging and creating less roadblocks for younger generations of women to become graduates of STEM programs and join STEM fields is important.

“That’s the biggest piece, which is if we want to create an impact in the world, we can’t have the population that’s actually creating most of the influence on the world’s GDP not innovating and solving the problems,” said Ahmad.

With three generations in his household, Ahmad sees generational differences in tech adoption, habits, motivations, and behaviours every day. The pace at which these generational shifts are occurring showcase why he believes we need to move the dial on gender representation in tech at a much faster pace.

Ahmad provided the example of how his son, who is a Gen Alpha, codes in GUI, while his Gen Z daughter codes with words.

This shift is even evident between Ahmad’s Gen Z and Millennial daughters when completing a simple Google search.

“She would not type on Google. She would actually 99 percent of the time speak to Google,” said Ahmad. “Versus my Millennial; she still types in and does not speak her text message.”

“I’m finding that the millions of Gen Z’ers are more purpose-driven, conscience, and culture-driven.”

Dagher believes the tech world wants to unlock the potential of humans in the next generation. She describes it as the age of personalization, where technology impacts the way we do everything, both personally and professionally.

It’s a world the younger generations may grasp more quickly than older generations. For example, it was Dagher’s kids who convinced the family to order groceries and pay bills online.

Within the workforce, Ahmad also sees a contrast in the approach to technology between multigenerational workforces (when four to five generations work together).

He describes how older generations tend to like to do things the same way they’ve always been doing them, while younger generations are more open to change and adopt tech more quickly. Ahmad wants more people to be aware of their generational blindspot when new forms of tech are introduced.

From the perspective of managing talent in an artificial intelligence world, how long certain generations are staying at companies is also different. Gen X’ers change jobs about every five to 10 years. Millennials find a new job about every two years, while Ahmad sees Gen Z’ers not being paid hourly or salary, but rather contingent on the work they complete.

“I’m finding that the millions of Gen Z’ers are more purpose-driven, conscience, and culture-driven,” said Ahmad.

Dagher explained that the issue the younger generation has with technology is relying on it too much. She believes the onus is on parents, teachers, and leaders to help this generation understand how to find balance. Dagher admitted that it starts at home through monitoring your kids tech habits.

“Technology is an enabler, but ultimately humans are the ones that are going to lead the transformation.”

“Technology is an enabler, but ultimately humans are the ones that are going to lead the transformation. It can help to complete certain tasks, but being wary of it controlling your life because it is addictive,” said Dagher.

She believes technology can be dangerous, with the potential to strip the younger generation of their personalities and social abilities. In Dagher’s eyes, losing the personal connection with humans is the only thing that differentiates us from the new world of artificial intelligence coming in the next five to 10 years.

When looking into the future, Ahmad echoed this sentiment, saying that he believes tech needs to be used ethically and to achieve good.

“The world is not only about IQ, you can have a machine, or a trained algorithm, on artificial intelligence and machine learning to do the work. It’s really about the emotional quotient (EQ), adaptability quotient (AQ), and decency quotient (DQ) of the human being,” said Ahmad.

According to the World Economic Forum report titled “The Future of Jobs 2018”, 30 to 50 percent of current job functions won’t exist over the next 10 years. The same report indicates 58 million new jobs will potentially be created because of artificial intelligence. To best prepare for this shift, Ahmad believes that human beings need to work with automation together. 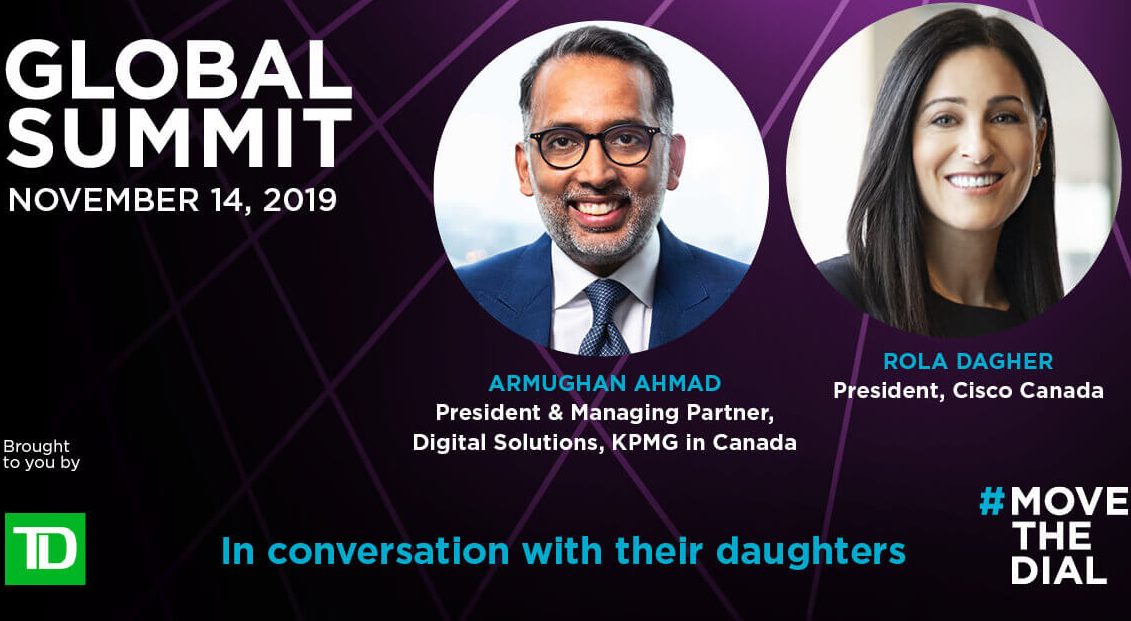 Hear more from Dagher, Ahmad, and their daughters at the second annual #movethedial Global Summit on November 14th in Toronto. Grab a ticket and get 50% off with code MOVETHEDIAL50.

##MoveTheDial ##MoveTheDial Global Summit
StartUp HERE
PARTNERS
Tweets by startuphereTO
Tweets from @startuphereTO/suhto-partners
“I think it’s an attractive place to come for talented people, it's a huge market for creative people and I think there are some companies emerging that give people hope that it can be done here.”
Mike McDerment, CEO/Co-Founder, Freshbooks
"A culture of collaboration is really at the heart of what’s next in innovation. What’s exciting in Toronto is that we have local and international businesses partnering with the startup ecosystem and increasingly with the academic community to position themselves for success in the future. And it’s happening across the spectrum from digital media and information technology, to life sciences and healthcare, energy solutions and social innovation.”

Paul Rowan, Co-Founder and VP Inspiration, Umbra
“Something that makes Toronto truly unique is that willingness to share and communicate with people very openly inside the industry looking at the global pie as something we can all co-create and achieve together.”
Satish Kanwar, Director of Product, Shopify
"Toronto is emerging as a technology hub and attracting increased investment, including ours, because of forward thinking government and amazing access to technology, an incredible talent pool and leading educational institutions, as well as industries and markets in healthcare and financial services.”

Dr. Rick Huijbregts, Vice-President, Industry Transformation, Cisco Canada
"Startups in Toronto benefit from support at every stage. From the very early stage we have incubators, accelerators and seed stage investors. In the growth stage, we have funders willing to invest a lot of money to really help a company take-off. This gives tech companies in Toronto a huge advantage.”
Allen Lau, CEO & Co-Founder, Wattpad
“In Toronto, Bombardier manufactures business and commercial aircraft and relies on the diversified, local regional supply chain. We work with more than 70 suppliers located in the Greater Toronto Area and we benefit from a variety of expertise going from complex machining to systems integration.”