“Our vision is to build a B2B trade network. One where we can connect businesses across any industry, in any market doing any form of B2B trade.”

The round was led by a mix of Silicon Valley investors like Lachy Groom, an early employee of Stripe, as well as AME Cloud Ventures, Tribe Capital, FundersClub, and also included Canadian VC firm Garage Capital, as well as other undisclosed investors. Convictional will use the new funds to build out more products and its engineering team. The company aims to help retailers expand their product catalogues by giving them access to more virtual supply chains and a network of potential partner brands.

“To succeed with inventory, you need years of historical sales data or a time machine,” said Chris Grouchy, co-founder of Convictional. “The slowness and risk of inventory isn’t the right business model for ecommerce companies. Convictional helps modern retailers expand their product catalogues by giving them access to virtual supply chains and a network of brands.”

The company was founded by Grouchy and Roger Kirkness, who met while working together at Shopify and realizing what they thought was one of the biggest problems that merchants had: inventory. The pair founded the startup in 2017 and were accepted into YC for itsWinter 2019 Batch, a year later. Grouchy stated his desire to move Convictional back to Canada after graduating YC because of Canada’s pool of engineering talent.

“We decided after Y Combinator to move back to Canada to build the company here because we felt that for the kind of business we wanted to build, the engineering talent is incredible and is on par with what we saw down in Silicon Valley,” Grouchy told BetaKit.

Convictional targets online retailers looking to onboard and integrate with third-party brands and vendors in order to sell products without taking on inventory risk. The startup is looking to address what it says is a $1 trillion problem – the fragmentation of B2B ordering, which Grouchy said creates friction for sales, IT, and ecommerce teams. Convictional’s solution is a centralized commerce platform that is meant to handle any order from any B2B customer.

Since the 1960s, vendors have used Electronic Data Interchange (EDI) systems to manage transactional processes and documents like purchase orders and invoices, with the alternative being email and spreadsheets. Grouchy told BetaKit that as a result of market power dynamics, B2B ecommerce has become very fragmented, whereby large retailers can standardize all necessary business documents involved in procuring inventory, while for suppliers, the system can be “incredibly archaic.” 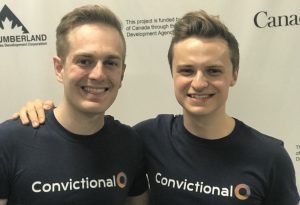 “Today, you have suppliers and buyers that didn’t exist six years ago using tech from the 1960s to buy and sell. It’s the same dynamic I saw over and over in the early days of Stripe,” said Groom. “When I met Convictional, it became clear that better software and a smart approach to distribution could enable more commerce to happen between businesses.”

The way Convictional addresses this problem is by developing a B2B trade network for businesses across an industry or market, with tools that enable any party in a B2B transaction to use their preferred method of trade, regardless of who has market power. The platform automates the processes like onboarding, inventory, product information, and order syncing, integrating with both the supplier systems and buyer systems, aiming to simplify the way trade is conducted.

“The whole goal is to start by automating as much of this as possible so that both sides can benefit,” Grouchy said, adding that the platform can reduce the time it takes to onboard a new vendor from five weeks down to minutes.

“Convictional’s vision is to build the B2B Graph,” said Kirkness. “Most B2B commerce relationships still exist offline. With better tools, we will reduce the friction involved in bringing those relationships online and enable more trade to happen.”

Spending some time in the Valley offered Grouchy several key lessons he could take home. One of those lessons, said Grouchy, is that founders have to be scrappy to secure those initial users and that it is often necessary to build up some “believability” around the company or offering.

“Oftentimes, a lot of startups, including ones at YC, often get bogged down by metrics on metrics. When, in reality, the metrics will come,” Grouchy noted. “What you should be focused on now is really understanding the story of the company, the story of the customer, and how the best team to solve it.”

Although some of the new funds will be put toward growing Convictional’s engineering team, with the goal of eventually creating a sales team, Grouchy said the startup hires very slowly due to the high talent bar. He said he wants to keep the team lean and give employees as much agency as he can for them to execute well on the product.

“Today, we’re starting by connecting brands to online retailers. Our vision is to build a B2B trade network,” Grouchy said. “One where we can connect businesses across any industry, in any market doing any form of B2B trade.”

#Convictional #eCommerce
StartUp HERE
Tweets by startuphereTO
"A culture of collaboration is really at the heart of what’s next in innovation. What’s exciting in Toronto is that we have local and international businesses partnering with the startup ecosystem and increasingly with the academic community to position themselves for success in the future. And it’s happening across the spectrum from digital media and information technology, to life sciences and healthcare, energy solutions and social innovation.”

Graham Kelly, Vice-President, Global Operations & Toronto Site, Bombardier Aerospace
“Something that makes Toronto truly unique is that willingness to share and communicate with people very openly inside the industry looking at the global pie as something we can all co-create and achieve together.”
Satish Kanwar, VP of Product, Acceleration, Shopify
“I think it’s an attractive place to come for talented people, it's a huge market for creative people and I think there are some companies emerging that give people hope that it can be done here.”
Mike McDerment, CEO/Co-Founder, Freshbooks
“The scale and quality of meet-ups and conferences and speaking events have gone up dramatically. You don’t need to leave Toronto to build a successful company.”
Evgeny Tchebotarev, Co-Founder, 500px
"Startups in Toronto benefit from support at every stage. From the very early stage we have incubators, accelerators and seed stage investors. In the growth stage, we have funders willing to invest a lot of money to really help a company take-off. This gives tech companies in Toronto a huge advantage.”
Allen Lau, CEO & Co-Founder, Wattpad
"If you come to our studio and take a look at the people sitting around the table discussing ideas, they’re from almost every part of the world. I think it has really helped Umbra create an international style.”