Toronto-based Fiix announced today the close of a $53 million ($40 million USD) Series C round, led by Georgian Partners, with participation from follow-on investor BuildGroup. As part of the funding, Georgian Partners Managing Partner Simon Chong will join Fiix’s board of directors.

The funding comes after a busy year for the maintenance and asset management software provider. In May, Fiix closed a $12 million USD Series B round led by BuildGroup, predominantly to drive the digital transformation of industrial enterprises in manufacturing, construction, transportation, and wholesale trade. In July, the company appointed a new CEO, replacing co-founder Marc Castel with then-President and COO, James Novak (Castel moved to executive chair of the board). The company also doubled its headcount in 2018.

“We look a lot more like Salesforce.com than we do IBM.”

Speaking with Novak over the phone, the CEO indicated to BetaKit that some things will remain the same for Fiix in 2019. With new funding, the company is on track to double its headcount again, to somewhere north of 200 employees by the end of the year.

Fiix is also still heavily focused on mid-market enterprise companies in equipment-intensive industries. Novak said that 70-80 percent of the company’s customers are coming from legacy (i.e., pen and paper) systems, with Fiix’s computerized maintenance management system (CMMS) providing a necessary uptime and efficiency boost in an increasingly competitive global market. The company’s CMMS exists on the cloud, meaning its customers don’t need any on-premise hardware to get started.

But while Fiix will use a portion of its new funding to capture the $6 billion USD market of customers stuck with legacy systems, it is also investing in AI and IoT to provide those customers with predictive maintenance when they’re ready to move beyond uptime.

“Today, we’re a point solution, and that’s primarily where the market lives – at the beginning of their digital transformation,” Novak said. “It’s important to partner with customers throughout the journey, and we’re just at phase one of that journey.”

The next step of that journey is the transition from a point solution to a platform, where Fiix plugs in IoT data and analytics into its customer’s workflow. Novak said the potential benefits of that potential integration include not only cost reductions, but increased quality of output, environmental optimizations, and improved worker health and safety, depending upon industry.

“Any time a technician needs to go out in the field and fix something, it’s our software leading that,” he continued. “The value with all this information integrated into your workflow is that the guy with the wrench is going out and making the fix based on our software. We are the actionable endpoint for the data.” 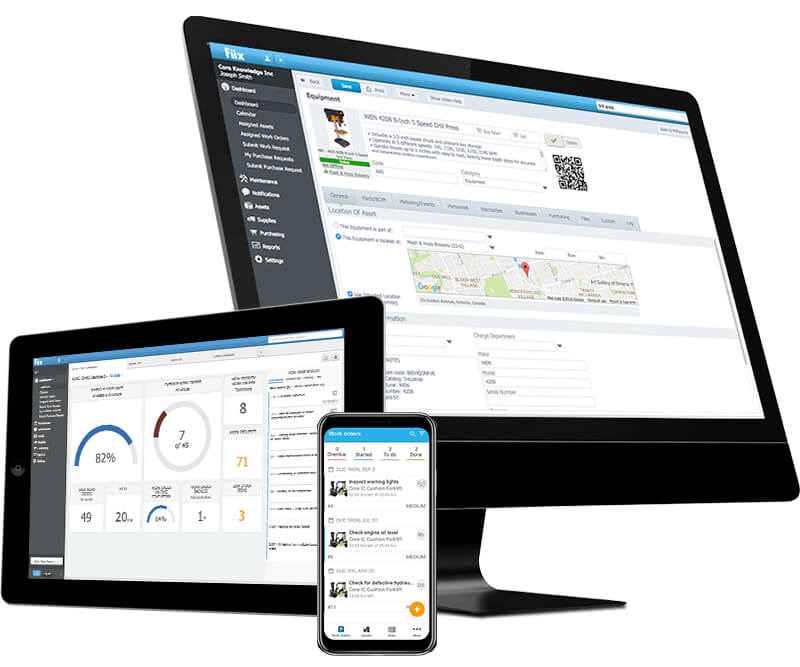 Of course, becoming an actionable endpoint for the industries that Fiix plays in requires solving a lot of complex problems with a varying scope of work. To that end, the company took money from Georgian Partners, which has been praised in the past by Canadian founders for its Impact Team, a group of Ph.D.’s with expertise in deep learning, software engineering, and privacy that embeds within Georgian portfolio companies. Novak indicated that Georgian’s range of “thought leadership and expertise that a company of our scale wouldn’t normally have yet” was a significant factor in the fundraising decision.

“The big players with their big, monolithic systems aren’t going to be able to handle this market.”

“The idea was to say, if you could move the needle on these thesis areas [of AI, privacy, etc.] before they became mainstream, then companies would be able to differentiate themselves, sell more, and therefore increase their valuation,” Chong said of the Impact Team, indicating that Georgian is morphing from consulting work to shipping actual software products to its portfolio companies.

Chong believes that Fiix is well ahead of the curve when it comes to the newfound readiness of the market to begin accepting predictive maintenance solutions as machine learning and leveraging large datasets has become more mainstream, but also how the company is positioned against incumbents like IBM and SAP.

“I think they have the most differentiated platform already, I think they’ll be even more differentiated when they get to predictive [maintenance],” he said, noting that most competitors still require on-premise solutions. “The big players with their big, monolithic systems aren’t going to be able to handle this market.”

Chong should know, having previously worked at IBM. But the sentiment resonated with Novak, who likened Fiix’s position to that of another SaaS upstart that ending up disrupting the CRM space.

“We look a lot more like Salesforce.com than we do IBM.”

#Fiix
StartUp HERE
Tweets by startuphereTO
“The scale and quality of meet-ups and conferences and speaking events have gone up dramatically. You don’t need to leave Toronto to build a successful company.”
Evgeny Tchebotarev, Co-Founder, 500px
"If you come to our studio and take a look at the people sitting around the table discussing ideas, they’re from almost every part of the world. I think it has really helped Umbra create an international style.”

Dr. Ilse Treurnicht, Former CEO, MaRS Discovery District
“I think it’s an attractive place to come for talented people, it's a huge market for creative people and I think there are some companies emerging that give people hope that it can be done here.”
Mike McDerment, CEO/Co-Founder, Freshbooks
“Something that makes Toronto truly unique is that willingness to share and communicate with people very openly inside the industry looking at the global pie as something we can all co-create and achieve together.”
Satish Kanwar, VP of Product, Acceleration, Shopify
"Startups in Toronto benefit from support at every stage. From the very early stage we have incubators, accelerators and seed stage investors. In the growth stage, we have funders willing to invest a lot of money to really help a company take-off. This gives tech companies in Toronto a huge advantage.”
Allen Lau, CEO & Co-Founder, Wattpad
“In Toronto, Bombardier manufactures business and commercial aircraft and relies on the diversified, local regional supply chain. We work with more than 70 suppliers located in the Greater Toronto Area and we benefit from a variety of expertise going from complex machining to systems integration.”