Given how much Canadian tech leaders talk about the commercialization of new, innovative technology like AI and blockchain, it can be easy to forget that the simple application of tech can make a world of difference.

A recent Capital One study revealed that 74 percent of Canadian charities believe a growing tech gap threatens the long-term success of their organization. This is the catalyst for the Capital One Gift the Code Hackathon – an annual hackathon created by Capital One and Hackworks.

At this year’s Gift the Code, which ran from November 16-18, teams “hacked” solutions to problems faced by six major non-profits and charities. While Blockchain and AI didn’t make it into any of the final pitches, the impact of the solutions could change lives across the country.

Hackers of all ages came together to code solutions for Kids Help Phone, the Movember Foundation, Camp Quality, the Boys & Girls Clubs of Canada, the Centre for Mindfulness Studies, and Toronto Cat Rescue. Capital One’s “charity champions” worked with each organization to ensure the hacking teams’ solutions addressed the charity’s biggest challenges in a practical way.

After a weekend of coding from over 200 participants people representing 34 teams, a judging panel featuring representatives from the six charities and members of the broader Toronto tech community chose the best solution for each organization.

“As someone who has participated in several hackathons, I was incredibly impressed with the quality of work presented at Gift the Code,” said BetaKit Editor-in-Chief and Gift the Code judge Douglas Soltys. “Working with each charity to provide specific development challenges allowed the hacking teams to deliver viable solutions in less than 48 hours. The fact that it was all to support charities with better tech made it a weekend well spent.” 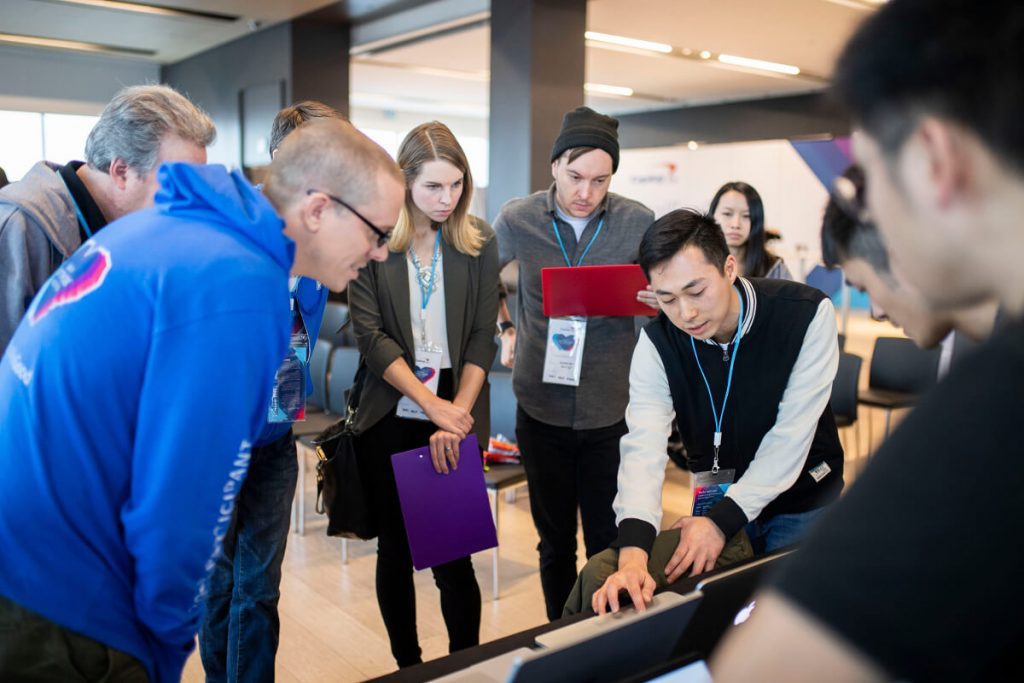 Team New A-Team was the first up to demo its solution.

As part of #UnplugToConnect, a Boys & Girls club movement encouraging people to forge real-life connections and reduce digital reliance, New A-Team built a simple web app that gamified “unplugging.” The longer a user unplugged (as tracked by the app), the more bragging rights they had. Taking inspiration from the ALS Ice Bucket Challenge, social integrations meant users could challenge friends to beat their score.

To combat this, Points pitched a Mo’ Coin rewards program where Movember supporters earn virtual currency for promoting Movember via social media or for shopping at Movember partner retailers. This, Team Points said, would help build the Movember partner ecosystem and offer incentives for users to support Movember year-round. The virtual currency could then be used to purchase items in Movember’s “Mo Space” social network through an e-commerce plugin.

Team Pied Piper took Camp Quality’s pen-and-paper tracking system and converted it into an app. Camp Quality is a summer camp for children with cancer, so high-quality data is a necessity for things like tracking medications and camper routines. The team ensured its app updated in real-time for all staff to know when a camper needed medication and streamlined report creation for parents when camp is over so continuity of care is maintained. In a high-stress environment, with precise timelines for medications, the app offered a reprieve for camp staff that would previously have to manually reconcile paper reports, opening room for error.

Capital One employees worked closely with the hacking teams over the weekend.

When Team PoMo dug into Kids Help Phone’s data, it noticed kids aged 4-10 weren’t engaging with the website, preventing counsellors from speaking with them. By creating a streamlined page for kids filled with quizzes and activities, PoMo accomplished two things: keep younger kids engaged while they wait to be connected with a counsellor; engaging them in a way that collects crucial data to help counsellors provide support. On the backend, Team PoMo built a real-time dashboard showing data and a severity profile for each child, helping counsellors more quickly get to kids who need help.

Team Kinda Casual took the Centre for Mindfulness Studies’ (CMS) mission of making mindfulness-based therapy more accessible for the disadvantaged, and offering practical work for program graduates to heart. The team’s app not only offered specific programs, increasing student-to-institution engagement, but left in-app nudges towards community, like telling users how many other people were in the same program as them or offering a digital forum for open conversations. The data from the app, like types of classes taken and number of students engaging, is then given in aggregate to CMS so it can leverage data-driven insights for next steps.

Previously, Toronto Cat Rescue (TCR) had been tracking all intake and waitlist information for their cats on one shared Google Sheet. It offered a difficult user experience, and with many volunteers not familiar with the software, it was prone to error. Team Awesome took on those challenges but didn’t abandon the platform. Since it was familiar to the TCR administrative team, Awesome built a Google data backend with a redesigned frontend. The team’s solution allowed for a simple intake form that anyone could use regardless of their tech proficiency. On the backend, data was cleanly populated in an easily-shareable format, with a special section for administrators to adjust as needed.

To end the weekend, Capital One announced $100,000 in committed funding to ensure the winning teams would have the resources needed to fully develop and implement their solutions for each charity.

BetaKit is a Gift the Code media partner and this article is sponsored by Capital One.

#AI #Blockchain #Gift the Code #Hackathon
StartUp HERE
PARTNERS
Tweets by startuphereTO
Tweets from @startuphereTO/suhto-partners
"Startups in Toronto benefit from support at every stage. From the very early stage we have incubators, accelerators and seed stage investors. In the growth stage, we have funders willing to invest a lot of money to really help a company take-off. This gives tech companies in Toronto a huge advantage.”
Allen Lau, CEO & Co-Founder, Wattpad
“The scale and quality of meet-ups and conferences and speaking events have gone up dramatically. You don’t need to leave Toronto to build a successful company.”
Evgeny Tchebotarev, Co-Founder, 500px
"Toronto is emerging as a technology hub and attracting increased investment, including ours, because of forward thinking government and amazing access to technology, an incredible talent pool and leading educational institutions, as well as industries and markets in healthcare and financial services.”

Graham Kelly, Vice-President, Global Operations & Toronto Site, Bombardier Aerospace
“Something that makes Toronto truly unique is that willingness to share and communicate with people very openly inside the industry looking at the global pie as something we can all co-create and achieve together.”
Satish Kanwar, Director of Product, Shopify
"If you come to our studio and take a look at the people sitting around the table discussing ideas, they’re from almost every part of the world. I think it has really helped Umbra create an international style.”

Paul Rowan, Co-Founder and VP Inspiration, Umbra
“I think it’s an attractive place to come for talented people, it's a huge market for creative people and I think there are some companies emerging that give people hope that it can be done here.”
Mike McDerment, CEO/Co-Founder, Freshbooks
/