As election season creeps closer, the federal government has made several announcements this week for investments in women-led startups, organizations, and universities dedicated to supporting women in business. The funding comes through the government’s $2 billion Women Entrepreneurship Strategy. Here’s a roundup of the announcements.

Wilfrid Laurier University (WLU) received $1,385,000 to offer support to women entrepreneurs at the early-stage startup phase, as well as those looking for incubator and accelerator space. Focus will be given to non-tech sectors and entrepreneurs creating social enterprises.

“The full and equal participation of women in our economy and society is a priority for our government.”

The university is a Women’s Entrepreneurship Strategy Ecosystem Fund recipient as part of the Regional stream, which fund projects that are national or multi-regional in scope. FedDev Ontario deployed the funding for WLU. The WES Ecosystem fund is part of the government’s Women’s Entrepreneurship Strategy, which is investing nearly $2 billion to improving women’s access to capital, resources, and networks to grow their businesses.

“I am proud to be part of a government that supports women-owned and-led businesses across Waterloo Region to export to new markets,” said Bardish Chagger, leader of the government in the House of Commons and member of parliament for Waterloo.

“We created the first ever Women Entrepreneurship Strategy, which will double the number of women-owned businesses in Canada over the next six years, enabling more businesses to innovate and grow,” she added. “The full and equal participation of women in our economy and society is a priority for our government.”

Queen’s University has received $3.2 million from the WES Ecosystem Fund, also as a regional stream recipient.

The funding is meant to help Queen’s and its partners deliver programs and services to accelerate, train, mentor, and provide resources to women-led companies locally. The funding supports three groups of women entrepreneurs in Kingston and surrounding regions: those who have founded or led technology companies, Indigenous women entrepreneurs, and recent female graduates from Queen’s University who are starting a business in Kingston.

“This important funding will enable Queen’s and its partners to design and deliver programs and services to accelerate the growth of several companies, in Kingston and region, that are founded or led by women entrepreneurs,” said Janice Mady, director of research and innovation partnerships at Queen’s University.

“At a high level, activities under this program will include: incubation and acceleration programs; training and workshops; access to mentors and resources; development, management and dissemination of a resource database; and the delivery of networking events to support the development of a women’s entrepreneurship ecosystem,” she said. 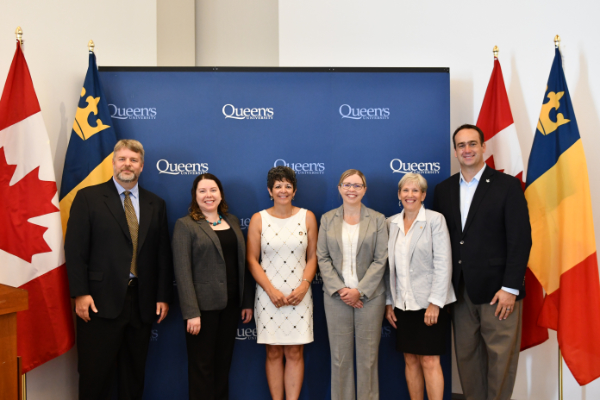 The project lead for the initiative is the university’s Office of Partnerships and Innovation (OPI). Other partners include the Dunin-Deshpande Queen’s Innovation Centre (DDQIC), the Smith School of Business, and the Queen’s Business Law Clinic (QBLC).

This week, Marie-Claude Bibeau, minister of agriculture and agri-food, announced $4.8 million in funding for women entrepreneurs and organizations in Quebec.

The government announced two new WES Ecosystem Fund recipients through the regional stream. These include Association communautaire d’emprunt de Montréal (Microcrédit Montréal), which will receive up to $1,461,000 to deliver adapted support services to help immigrant women develop their entrepreneurial skills; and the Youth Employment Services Foundation, which will receive up to $1,260,000 to support women across Quebec of official language minority communities to grow their business.

“The government of Canada is committed to ensuring the full and equal participation of women in our economy and society,” said Bibeau. “Today’s investments will help women-owned and led businesses across Quebec innovate, grow, and export to new markets.”

Along with her fellow MPs, Bibeau also touted the Liberal Party line that has been repeated at almost every WES announcement, stating that their government was “the first ever” to create the Women Entrepreneurship Strategy, seeking to “double the number of women owned businesses in Canada over the next six years.”

How Sitti won over consumers with products that support refugees

#Government of Canada #Women Entrepreneurs #Women Entrepreneurship Strategy
StartUp HERE
Tweets by startuphereTO
"A culture of collaboration is really at the heart of what’s next in innovation. What’s exciting in Toronto is that we have local and international businesses partnering with the startup ecosystem and increasingly with the academic community to position themselves for success in the future. And it’s happening across the spectrum from digital media and information technology, to life sciences and healthcare, energy solutions and social innovation.”

Dr. Ilse Treurnicht, Former CEO, MaRS Discovery District
“The scale and quality of meet-ups and conferences and speaking events have gone up dramatically. You don’t need to leave Toronto to build a successful company.”
Evgeny Tchebotarev, Co-Founder, 500px
“I think it’s an attractive place to come for talented people, it's a huge market for creative people and I think there are some companies emerging that give people hope that it can be done here.”
Mike McDerment, CEO/Co-Founder, Freshbooks
“In Toronto, Bombardier manufactures business and commercial aircraft and relies on the diversified, local regional supply chain. We work with more than 70 suppliers located in the Greater Toronto Area and we benefit from a variety of expertise going from complex machining to systems integration.”