Home
Close Menu
Get Social with Us
Here’s a Look at the Architecture Firm Designing Offices for Shopify, Element AI, and Klipfolio

As much as the startup world has a reputation for being nimble, there’s also a reputation for the interesting workspaces that these startups inhabit. Bricks-and-beams and ping pong tables are the oft-recounted feature of startup offices, but what the community might not see are the ideas, careful thinking, and planning that goes into designing those spaces.

To shed some light on the work and creativity that goes into designing startups’ offices, BetaKit spoke with architecture firm Linebox Studio, which is building a reputation for designing office spaces for tech companies like Klipfolio, Shopify, and Element AI.

“There was no real business plan or intention to take over the high-tech market and honestly, it was a bit of a mistake.”

Founded by Andrew Reeves in 2008, Linebox Studio is an architectural studio with offices in Toronto, Montreal, and Ottawa. While Linebox initially began as an architecture firm designing residential houses and restaurants, the company moved into the high-tech sector after Shopify CEO Tobi Lütke asked Reeves to design Shopify’s headquarters in Ottawa.

“We kind of grew up in the housing world. There was no real business plan or intention to take over the high-tech market and honestly, it was a bit of a mistake,” said Reeves, the owner and senior architect at Linebox. “The neat thing was our approach to houses as in unique character, quality, finishes, and detailing and being creative with materials would translate well to what they [Shopify] wanted to achieve in the office environment.”

When asked about how Linebox approaches design thinking when creating spaces for Canadian tech companies, Reeves said he considers the character of the place, as well as the character of the company and its workers. The goal is to understand how the workspace can reflect the various preferences, work styles, and relationships that a company wants to encourage. 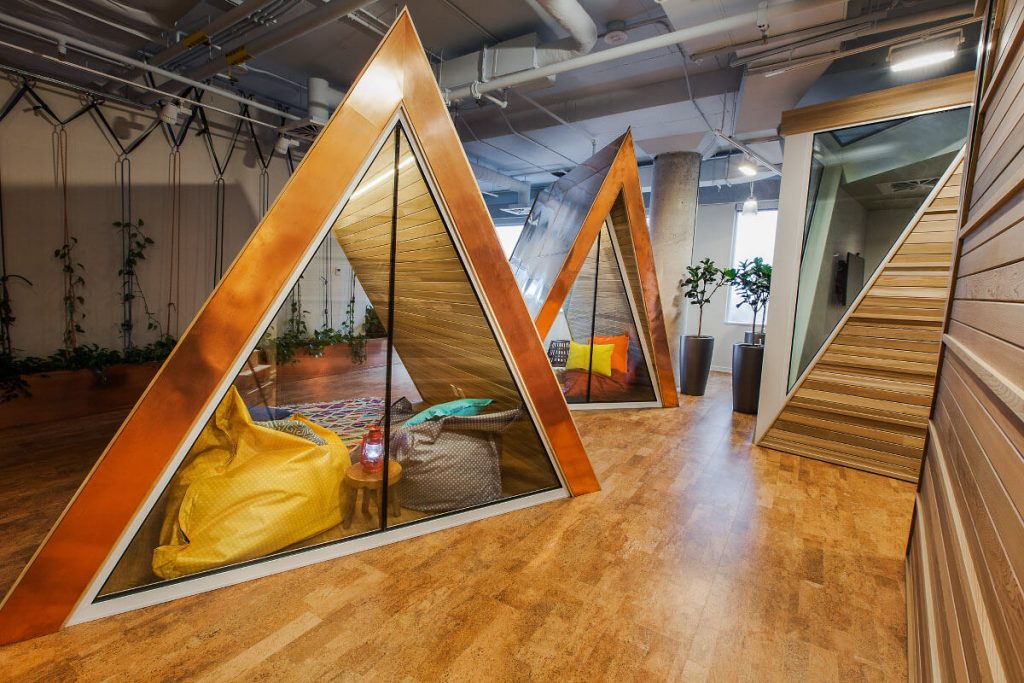 For example, when Linebox designed Shopify’s headquarters, the firm had to consider how to make the workplace comfortable and conducive for the work habits of both teams that are doing more collaborative work, and individuals that may need more private workspace.

“It’s not about our architectural statement that you have to work or live in. We’re more interested in finding out who these characters are and what this company is and where they want to go and the kind of people they want to attract and their offices,” said Reeves. “I look at offices as homes. They’re not places to work…so what’s at the forefront is truly understanding each company.

“Even though we’ve dealt with now a bunch of different high tech companies, they’re all different characters and they have their own very clear identity both corporally, but also culturally and then layering that on with just understanding space and how people move through space and the quality of their day is important,” he added.

Reeves said that along with thinking about how people will interact with space in an office, it’s also important to understand a company’s business mindset in order to inspire innovation, new ideas, and collaboration. 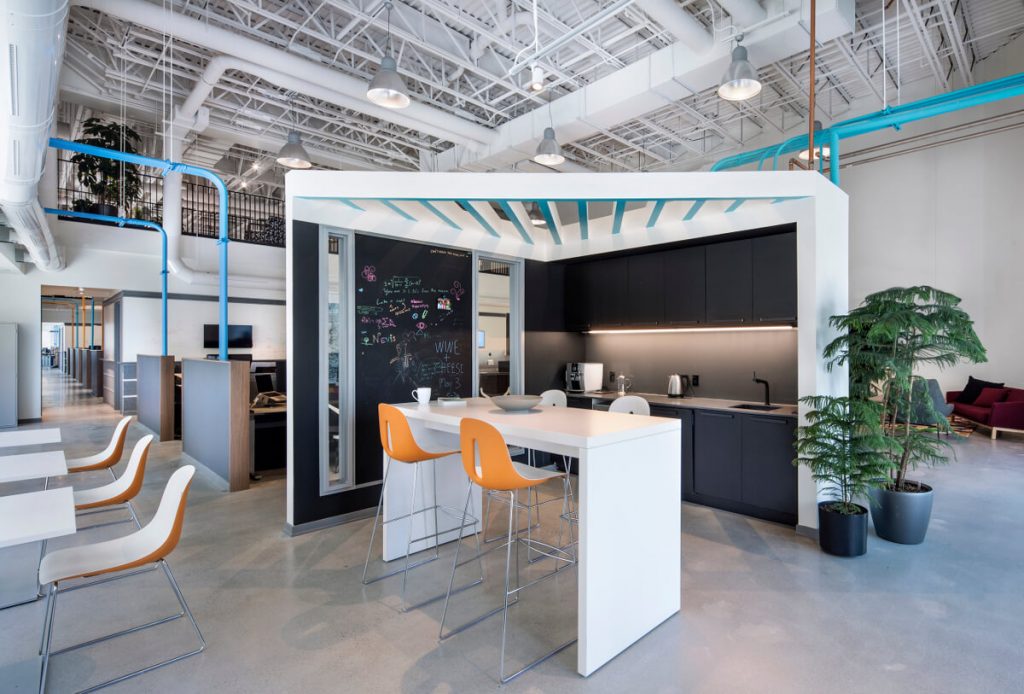 “Understanding just the business side of things like how proper collaboration and connection with each other promotes good business,” said Reeves. “Does the architecture have the ability to allow for these accidental interactions where the CEO is walking down the stairs, runs into a new hire, and they pull over, and have a discussion, and that discussion turns into a whole new product? How can architecture respond to the business and budget aspect, the corporate inner workings of connecting and chatting and responding to the individual character that is the company?”

According to Reeves, office spaces are designed best when Linebox can sit down with a company’s team members and hear the story of how a startup began.

“When we meet new clients, we sit down with them and we go for dinner, show drawings on a table, and we ask for their stories. How did this startup start? What was the first interaction?” said Reeves, stressing that he enjoys learning where the idea of a startup originated. “It’s extremely interesting how these ideas have come from people literally mostly from their basement now to these high-end companies that are taking over the world.”

“We have no desire to leave this industry and we want to keep finding all these amazing opportunities and building amazing space.”

Reeves noted that every company has a vision and intimate view of the space they want to create for their team members, which is why Linebox focuses on understanding their journey, the culture they want to breed inside their office space, as well as how a company wants its team to move around the space. “Space has to be successful on all levels. It has to have character. It has to have purpose,” said Reeves.

He also stressed that he usually avoids showing magazines or images of the latest fads when working with a tech company because he wants to understand the company’s needs and preferences.

When asked whether the design of a workspace can impact the productivity of tech workers, Reeves explained how factors like the quality of light, air, sound, plants, and open space may enhance work performance.

“You could easily just throw a bunch of cubicles in an office and it’s much cheaper, much faster, much easier. But I believe that they space does enhance performance and it creates for a better environment, more creative environment,” said Reeves. “I believe that good architecture is a backdrop for creatives ideas that can spark from other people. If you’re immersed in that environment, I like to feel that it enhances the opportunity for more innovation and more ideas.”

While Linebox has designed several offices for tech companies in Ottawa, Montreal, and Toronto to date, the architecture firm plans to grow its presence in the tech ecosystem by networking with other founders to design more offices.

“I believe Canada has momentum,” said Reeves. “We are here and we love the high-tech sector and we love the people that we meet. They’re equally passionate and driven as we are so we have no desire to leave this industry and we want to keep finding all these amazing opportunities and building amazing spaces in all three cities, and anywhere in the world.”

#Element AI #Klipfolio #Shopify
StartUp HERE
Tweets by startuphereTO
"A culture of collaboration is really at the heart of what’s next in innovation. What’s exciting in Toronto is that we have local and international businesses partnering with the startup ecosystem and increasingly with the academic community to position themselves for success in the future. And it’s happening across the spectrum from digital media and information technology, to life sciences and healthcare, energy solutions and social innovation.”

Graham Kelly, Vice-President, Global Operations & Toronto Site, Bombardier Aerospace
“I think it’s an attractive place to come for talented people, it's a huge market for creative people and I think there are some companies emerging that give people hope that it can be done here.”
Mike McDerment, CEO/Co-Founder, Freshbooks
“Something that makes Toronto truly unique is that willingness to share and communicate with people very openly inside the industry looking at the global pie as something we can all co-create and achieve together.”
Satish Kanwar, VP of Product, Acceleration, Shopify
"Startups in Toronto benefit from support at every stage. From the very early stage we have incubators, accelerators and seed stage investors. In the growth stage, we have funders willing to invest a lot of money to really help a company take-off. This gives tech companies in Toronto a huge advantage.”
Allen Lau, CEO & Co-Founder, Wattpad
“The scale and quality of meet-ups and conferences and speaking events have gone up dramatically. You don’t need to leave Toronto to build a successful company.”
Evgeny Tchebotarev, Co-Founder, 500px
"If you come to our studio and take a look at the people sitting around the table discussing ideas, they’re from almost every part of the world. I think it has really helped Umbra create an international style.”