Car auctioning is an age-old trade, and in the early 2000s, when new tech was beginning to disrupt the automotive industry, Mark Endras, co-founder and CTO of TradeRev, noticed that automotive remarketing was not evolving. The expensive, lengthy, and antiquated method of car auctioning was not keeping up with the rapidly changing sales infrastructure of other industries.

“One thing we don’t lack as entrepreneurs is ideas. Our biggest challenge was to not get distracted.”

Endras, speaking at #CollisionConf in Toronto last week, noted that he began his professional career in the early 2000s as a Java programmer at Wysdom. The company set out to build a Java-based intermediary for smartphone app developers, around six years before the advent of the iPhone and App Store – when the Nokia and Razor flip phone were all the rage.

“There’s something to be said about the market not being ready for your product,” Endras said.

In 2009, Endras founded TradeRev, a B2B mobile phone marketplace allowing car dealers to sell and buy inventory with each other. The app aims to create a digital marketplace where car dealers can launch and participate in real-time auctions.

The company officially launched in 2011, co-founded by Endras, Wade Chia, Jae Pak, and James Tani. TradeRev sought to compress the time and cost of transactions from a three-week process, to an auction that takes less than an hour, and the car could be picked up as early as the next day. TradeRev’s software solution was adopted across Canada, and since the summer of 2015, has been aggressively increasing its presence in the United States and the UK.

RELATED: Canadian tech needs to redefine its sense of scale

In TradeRev’s early days, the team went through five different office moves in a very short period of time, and at one point, held three sub-leases at the same time, which Endras attributed to not anticipating how fast the company would grow. Because TradeRev was bootstrapped, shifting office spaces was beginning to upset the business, preventing the company from focusing on its customers and TradeRev’s value proposition.

“As soon as the market realized our business model could stick, we started getting competition,” he said. “The copycats flooded in. We really had to innovate to stay ahead.”

Missing a core piece of the puzzle

Endras self-funded the company for $30,000, which eventually turned into $700,000. Then, in 2011, TradeRev raised a $1 million USD angel round, and another $3 million shortly followed 12 months later. Endras said his concerns were concentrated on the new money that would allow TradeRev to grow its business, while ignoring the other kind of value these partners brought.

Even with TradeRev growing rapidly, Endras realized there was a crucial piece missing at TradeRev’s core – culture. He said that although setting values and building a culture early may not seem like the most important step in organizing a company, it allows a team to map out what the company’s definition of “success” is. 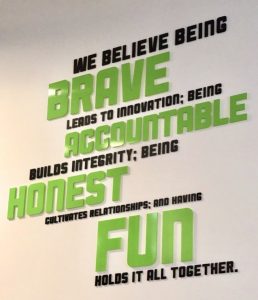 “Culture seems like a very nebulous, squishy concept, and it is a buzzword. But the reality is, it’s grounded in hard truths and core values,” he said. “I got together with a TradeRev leadership team and really started discussing what values were important to us and what we wanted to stand by.”

What manifested was “FHAB,” a company acronym embodying the words the TradeRev team strives to be: fun, honest, accountable, and brave.

“[FHAB] really is pervasive through everything we do, the way we have fun, the way we’re accountable to each other for projects, being brave, and making the right decisions in our business. It was when we had these values, that our culture really started to get defined and it empowered our employees.”

As TradeRev started to gain traction, the company was approached with ideas to expand the TradeRev approach to new markets, like the recreational vehicle market, the wine market, the real estate market, even the frozen fish market, and Endras considered it for half a year. The company began developing generic auction models to see how well they would do, but it ultimately just distracted the company.

“One thing we don’t lack as entrepreneurs is ideas,” he said. “We have lots of them, some good and most, not so good. Our biggest challenge was to not get distracted, because there’s always an opportunity cost.”

Over the decade since TradeRev began, the company has grown from two employees to 700 across North America, has gone through two funding rounds, and in 2017, was acquired by US-based Kar Auction Services, a platform for wholesale-used car sellers and buyers. Endras said, this year, TradeRev is about to list 400,000 cars and transact more than $2 billion on its platform. The company was also recently named as an innovative workplace on Elevate’s 50 Most Innovative Workplaces list.

Looking ahead, Endras is hoping for TradeRev to be a part of the digital-retail transformation in the autotech industry. The company is looking to make the auctioning process more transparent and is investing in AI to enable faster, more accurate auctions.

#Collision #TradeRev
StartUp HERE
PARTNERS
Tweets by startuphereTO
Tweets from @startuphereTO/suhto-partners
"A culture of collaboration is really at the heart of what’s next in innovation. What’s exciting in Toronto is that we have local and international businesses partnering with the startup ecosystem and increasingly with the academic community to position themselves for success in the future. And it’s happening across the spectrum from digital media and information technology, to life sciences and healthcare, energy solutions and social innovation.”

Dr. Ilse Treurnicht, CEO, MaRS Discovery District
“The scale and quality of meet-ups and conferences and speaking events have gone up dramatically. You don’t need to leave Toronto to build a successful company.”
Evgeny Tchebotarev, Co-Founder, 500px
“Something that makes Toronto truly unique is that willingness to share and communicate with people very openly inside the industry looking at the global pie as something we can all co-create and achieve together.”
Satish Kanwar, Director of Product, Shopify
“I think it’s an attractive place to come for talented people, it's a huge market for creative people and I think there are some companies emerging that give people hope that it can be done here.”
Mike McDerment, CEO/Co-Founder, Freshbooks
"Toronto is emerging as a technology hub and attracting increased investment, including ours, because of forward thinking government and amazing access to technology, an incredible talent pool and leading educational institutions, as well as industries and markets in healthcare and financial services.”

Dr. Rick Huijbregts, Vice-President, Industry Transformation, Cisco Canada
“In Toronto, Bombardier manufactures business and commercial aircraft and relies on the diversified, local regional supply chain. We work with more than 70 suppliers located in the Greater Toronto Area and we benefit from a variety of expertise going from complex machining to systems integration.”