“For the first time in decades, we have a crop of scale-ready firms that are on the path to $100 million.”

“When it comes to innovation, Canada is home to countless success stories,” Trudeau stated, as he made the announcement at Communitech in Kitchener. “We have all the right ingredients to lead the future, a future where tech and innovations are engines of prosperity.”

He noted that Canadians are leading the way globally in a number of sectors including AI and machine learning and pointed to the need for the government to partner with organizations to support new technologies, in order to solidify Canada’s place as a global leader in innovation.

Calling it a “first-of-its-kind platform” Trudeau stated the new program will give startups and scale-ups alike new opportunities, create 18,000 jobs, and $11 billion in revenue, as well as attract millions of dollars in investment.

The three organizations, spanning Kitchener-Waterloo, Toronto, and Ottawa, will pool their resources to implement the program. Scale-Up Platform plans to help 30 Ontario companies scale up, with the goal of helping those companies achieve revenues of $100 million or more, by 2024. The program will also look to provide services, including advice on accessing capital, talent, and global markets to thousands of other companies, as well as building stronger partnerships with post-secondary institutions.

The $52.4 million investment is being made by the Government of Canada, through FedDev Ontario. The money will be spread over five years, with Communitech receiving $18 million, MaRS receiving $17.5 million, and $16.9 million set aside for Invest Ottawa. 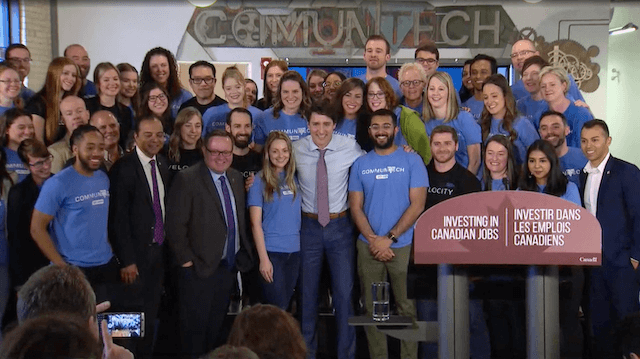 “Tech companies that generate more than $100 million in annual revenue will be Canada’s next generation of anchor firms,” stated Iain Klugman, president and CEO of Communitech. “For the first time in decades, we have a crop of scale-ready firms that are on the path to $100 million. Our job, through the Scale-Up Platform, is to help those high-growth firms find the talent and capital to accelerate their growth. We need to pool our expertise, our networks, and our resources to help them compete globally and create good-paying jobs for Canadians.”

Trudeau has previously spoken out about creating an environment in Canada that allows companies to scale. Earlier this year, at a Toronto Region Board of Trade dinner, he stated, Canada needs to be “keener” on recognizing and taking advantage of our resources.

RELATED: PM Justin Trudeau tells Vidyard Canadian tech can compete against “any country in the world”

“We need to make sure there is a business ecosystem, supporting and drawing on this world-class talent we have,” Trudeau said at the time.

Regarding today’s announcement, Trudeau pointed to the traditional challenges facing Canadian companies when it comes to scaling. He noted this investment is focused specifically on addressing those challenges by utilizing the different skills and resources of what he called the some of Canada’s top innovation hubs.

“Where we have traditionally faced a challenge in Canada, is companies scaling up from $5 million… to $100 million dollars,” he said, “We know, talking to many entrepreneurs and startups leaders that they would love to scale up and stay in Canada, they don’t want to have to sell out to global investor and Silicon Valley. We recognize the benefits of them scaling up at home are enormous…we want to help them grow into the global platforms we know that can be.”

Today’s investment is part of the government’s Innovation and Skills Plan, which looks to make strategic investments to build “innovation ecosystems in Canada.” Other investments have included the Supercluster initiative, Venture Capital Catalyst, and the Global Skills Strategy.

The 30 companies that will be receiving support from the Communitech, MaRS Discovery District, and Invest Ottawa, to help them scale were not specified in the announcement.

#Government of Canada #Scale-Up Program
StartUp HERE
Tweets by startuphereTO
“In Toronto, Bombardier manufactures business and commercial aircraft and relies on the diversified, local regional supply chain. We work with more than 70 suppliers located in the Greater Toronto Area and we benefit from a variety of expertise going from complex machining to systems integration.”

Paul Rowan, Co-Founder, Umbra
“The scale and quality of meet-ups and conferences and speaking events have gone up dramatically. You don’t need to leave Toronto to build a successful company.”
Evgeny Tchebotarev, Co-Founder, 500px
“I think it’s an attractive place to come for talented people, it's a huge market for creative people and I think there are some companies emerging that give people hope that it can be done here.”
Mike McDerment, CEO/Co-Founder, Freshbooks
"Startups in Toronto benefit from support at every stage. From the very early stage we have incubators, accelerators and seed stage investors. In the growth stage, we have funders willing to invest a lot of money to really help a company take-off. This gives tech companies in Toronto a huge advantage.”
Allen Lau, CEO & Co-Founder, Wattpad
“Something that makes Toronto truly unique is that willingness to share and communicate with people very openly inside the industry looking at the global pie as something we can all co-create and achieve together.”
Satish Kanwar, VP of Product, Acceleration, Shopify
"A culture of collaboration is really at the heart of what’s next in innovation. What’s exciting in Toronto is that we have local and international businesses partnering with the startup ecosystem and increasingly with the academic community to position themselves for success in the future. And it’s happening across the spectrum from digital media and information technology, to life sciences and healthcare, energy solutions and social innovation.”