This week at Montreal’s Startupfest, Female Funders announced the launch of its Women in Venture report analyzing the Canadian angel and venture capital landscape.

Eighty-four percent of dollars committed to the country’s top funds are controlled by teams with no women general partners.

The report was produced with Toronto-based Hockeystick, and uses public data from VC firm websites, and platforms including LinkedIn, Crunchbase, and Hockeystick itself. The dataset includes 33 Canadian venture capital firms that either made investments in 2017 or announced the close of a fund in the last 12 months, and the self-reported makeup of 22 angel groups in 2017.

The report acknowledges that women entrepreneurs have a higher chance of closing investment when a woman investor is involved, citing data that women-led startups are more likely to get investment if they have at least one woman partner on their team. However, eighty-four percent of dollars committed to the country’s top funds are controlled by teams with no women general partners. 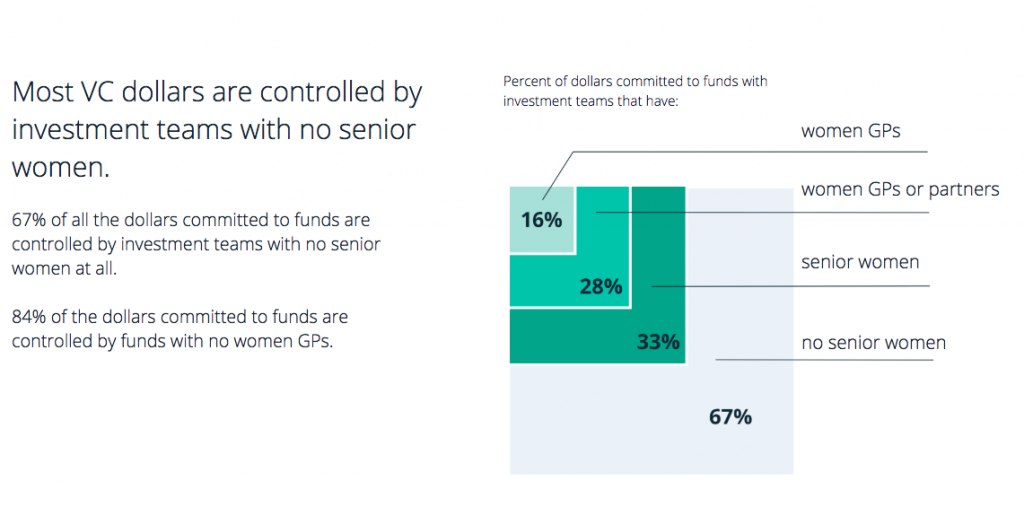 “While Canada is leading the conversation about women in entrepreneurship, we also need to consider who’s on the other side of the table,” said Lauren Robinson, executive director of Female Funders and COO at Highline BETA. “Deal flow often comes from pre-existing networks, which explains why when investment teams include women, they are more likely to invest in female entrepreneurs. Until we have women on both sides of the table—among both entrepreneurs and investors—we won’t see real change.”

Robinson noted that entrepreneurs-in-residence were also taken into account for their ability to add expertise to investment committees. The report found that 18 percent of EIRs and advisors are women, but zero percent of venture partners at Canadian VC funds are women.

On the angel investor side, Female Funders found that on average, women make up less than 15 percent of angel groups’ membership. The membership of most angel groups range from seven percent to 17 percent women.

Firms should encourage mentorship and sponsorship of talent within to ensure that women are moving up in seniority.

The Canadian number is lower than American angel groups, where women comprise 22 percent of angels. It’s noted within the report that this number exists despite the fact that in the last decade the potential pool of angels has grown. The total number of women earning at least $250,000 jumped by 49 percent, which is three times the 16 percent increase in men seen in the same time period.

“Being a woman in tech is hard. Being a female entrepreneur is hard. Luckily, we’re starting to talk about it as a community and make changes for the better. But we talk less about the challenges of being a female investor,” said Elizabeth Caley, chief of staff at Meta. “I’m excited to join the next cohort of the Female Funders program because clearly, diversity is a strength. I’m proud to join and learn from a community dedicated to strengthening tech ecosystems around the world.”

As for what’s next, Female Funders recommends creating pathways for potential women funders, including looking at recruiting technology and evaluating corporate executives as potential venture partners. Firms should encourage mentorship and sponsorship of talent within to ensure that women are moving up in seniority.

While the report works to provide a foundation for surveying the landscape of women in venture capital, it acknowledges the limitations of the data currently available: less than one-third of firms publicly list VC roles.

#Female Funders #StartupFest #VCs
StartUp HERE
Tweets by startuphereTO
“In Toronto, Bombardier manufactures business and commercial aircraft and relies on the diversified, local regional supply chain. We work with more than 70 suppliers located in the Greater Toronto Area and we benefit from a variety of expertise going from complex machining to systems integration.”

Graham Kelly, Vice-President, Global Operations & Toronto Site, Bombardier Aerospace
“Something that makes Toronto truly unique is that willingness to share and communicate with people very openly inside the industry looking at the global pie as something we can all co-create and achieve together.”
Satish Kanwar, VP of Product, Acceleration, Shopify
"A culture of collaboration is really at the heart of what’s next in innovation. What’s exciting in Toronto is that we have local and international businesses partnering with the startup ecosystem and increasingly with the academic community to position themselves for success in the future. And it’s happening across the spectrum from digital media and information technology, to life sciences and healthcare, energy solutions and social innovation.”

Dr. Ilse Treurnicht, Former CEO, MaRS Discovery District
“The scale and quality of meet-ups and conferences and speaking events have gone up dramatically. You don’t need to leave Toronto to build a successful company.”
Evgeny Tchebotarev, Co-Founder, 500px
"Startups in Toronto benefit from support at every stage. From the very early stage we have incubators, accelerators and seed stage investors. In the growth stage, we have funders willing to invest a lot of money to really help a company take-off. This gives tech companies in Toronto a huge advantage.”
Allen Lau, CEO & Co-Founder, Wattpad
“I think it’s an attractive place to come for talented people, it's a huge market for creative people and I think there are some companies emerging that give people hope that it can be done here.”
Mike McDerment, CEO/Co-Founder, Freshbooks
"If you come to our studio and take a look at the people sitting around the table discussing ideas, they’re from almost every part of the world. I think it has really helped Umbra create an international style.”