After three years and a half years at Velocity, Jay Shah announced this week that he will be departing from his role as director of the Kitchener-Waterloo incubator.

Shah will exit the role near the end of February, following a tenure that began in September 2016. In a blog posted Tuesday, Shah shared that he was “burnt out,” and will be taking time to recharge before proceeding elsewhere. The incubator is currently looking for a new director to replace Shah.

Following his announcement on Tuesday, BetaKit spoke with Shah about his decision to leave Velocity as well as his time at the entrepreneurial hub.

Velocity was founded in 2008, as what Shah has previously called a “dorm program” to help student entrepreneurs based at the University of Waterloo connect. Over the next 12 years, the program expanded into its current space, the 37,000 square-foot Velocity Garage, an incubator that has supported more than 300 companies. Notable alumni companies include Faire, Kik, and Vidyard.

“As you can imagine, helping startups is not easy.”

As the co-founder of BufferBox, Shah is an alumnus of Velocity and was a Velocity Residence Don before taking up the director role. BufferBox won the Velocity Fund Finals before being acquired by Google in 2012.

Shah attributed part of his burn out to how the “breadth” of what Velocity was doing had expanded over time, he told BetaKit that the organization had not adapted the team structure to manage the new level of activity and output.

Velocity experienced some major changes in the last year, however. Under Shah’s leadership, for example, Velocity launched Concept, a pre-incubator campus program to house Velocity’s student- and campus-focused initiatives under a new brand and team.

Shah told BetaKit the decision to leave Velocity came around the time the director role restructuring took place. He said wanted to ensure a smooth shift for both the incubator and his successors.

Following the restructuring of the role, Camelia Nunez was named director of Concept, the student entrepreneurship branch, with the new executive director position vacant, but expected to be announced soon. Shah was tasked with heading up Velocity’s startup programs as director of Velocity Incubator, before his decision to step down.

“We’re going to have to take a look at … what needs to change so that we can make this something really good.”

“Once we had made that transition, [I thought] that would be a good time for me to then seek the right moment to do a leadership transition,” Shah said. “I think that took a lot on the university’s leadership and certainly on our own team to recognize that in order to continue the increasing of our impact, we’re going to have to take a look at … what needs to change so that we can make this something really good.”

“It seemed like an appropriate time,” CEO of BitBakery Wes Worsfold told BetaKit, of Shah’s departure. Worsfold was an associate director and business advisor at Velocity from 2014 to 2018 and worked directly with Shah. Worsfold highlighted Velocity’s move into deep tech under Shah’s direction, and the new Velocity Fund as two changes that could have a “huge impact” on the region’s startup ecosystem.

During Shah’s tenure, the hub also co-hosted Corridor Demo Day across four cities and shifted away from grants-based venture funds to provide direct funding support to startups. Shah said the incubator has also launched 47 startups during his time as director.

In his blog post, Shah said that Velocity had over 24,000 student engagements through workshops, talks, and other events during his time there. The hub also expanded its product development infrastructure with the addition of the PerkinElmer lab last year.

Mike Kirkup, Shah’s predecessor and former director of Velocity, echoed Shah’s sentiment about Velocity not adapting its structure to its expanded mandate.

Kirkup served in Shah’s position beginning 2011 and ending in 2016, and now serves as the chief technology officer of Encircle, another Velocity alumnus. He told BetaKit he thinks Shah made good changes at the hub, particularly in breaking up the director role, adding that because of the highly demanding nature of the position in his own experience, he’s not surprised by Shah’s departure.

“It’s a hard role, I can say that with a lot of confidence,” Kirkup told BetaKit. “Part of what makes it hard is that you’re trying to help a lot of people simultaneously. As you can imagine, helping startups is not easy.” 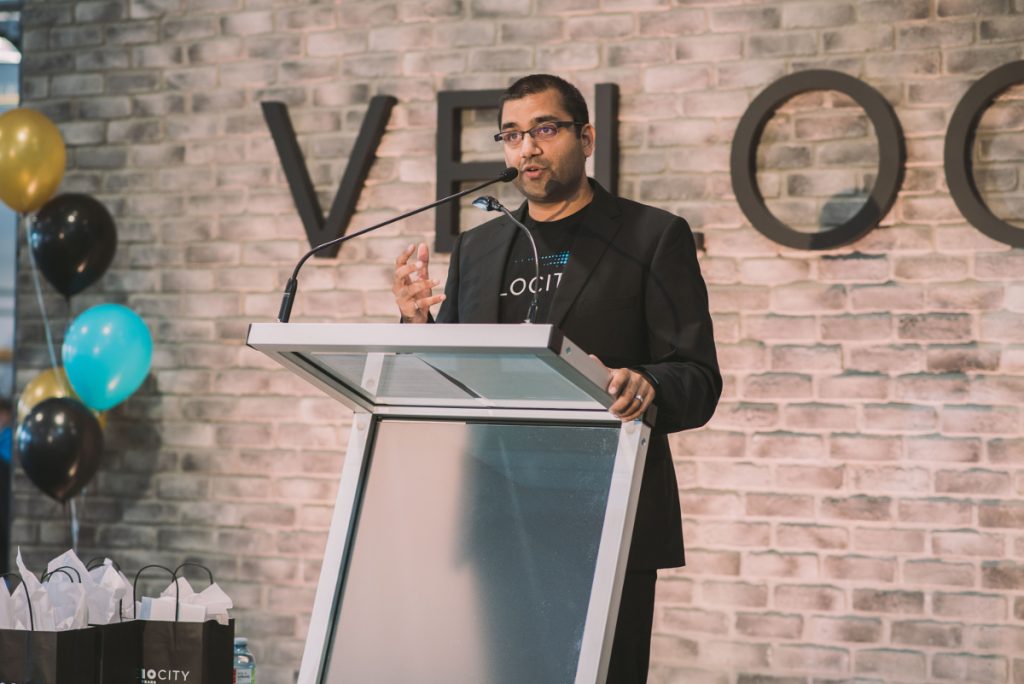 Shah said one challenge for him was disconnecting himself from the challenges that various companies faced during his off-time. The sheer volume of activity, both high and low, is ultimately part of the nature of the role, he said.

Kirkup noted the many concurrent responsibilities associated with the position, including supporting all of the startups, building programs to support those startups, while also encouraging students to think about entrepreneurship, made it a challenging undertaking when he was there. He added that Shah has stewarded the program well as it has evolved, and that change will be healthy for Velocity.

“In many senses, it’s a really unique role, because you get to see that funnel from pre-idea all the way through to scaling companies,” Kirkup said. “But there’s a lot of breadth to the role because of that.”

Shah told BetaKit his plan now is “not to make a plan,” rather he wants to take this time to “recharge” and figure out what’s next. He said he’s walking away from the role with an immense appreciation for the Kitchener-Waterloo area, and that he’s still bullish on what’s happening in the region.

“What we have here is truly remarkable,” Shah said. “I think I have a really heightened sense of appreciation for this community and its ability to punch above its weight.”

Shah said he is optimistic about the hub’s future, adding that he should be considered “pre-committed” to any future investment funds at the hub.”

Communitech: Ask Me Anything Sessions: PR 101 for Startup and Scale-ups

#Velocity
StartUp HERE
PARTNERS
Tweets by startuphereTO
Tweets from @startuphereTO/suhto-partners
“The scale and quality of meet-ups and conferences and speaking events have gone up dramatically. You don’t need to leave Toronto to build a successful company.”
Evgeny Tchebotarev, Co-Founder, 500px
"A culture of collaboration is really at the heart of what’s next in innovation. What’s exciting in Toronto is that we have local and international businesses partnering with the startup ecosystem and increasingly with the academic community to position themselves for success in the future. And it’s happening across the spectrum from digital media and information technology, to life sciences and healthcare, energy solutions and social innovation.”

Dr. Ilse Treurnicht, CEO, MaRS Discovery District
"Startups in Toronto benefit from support at every stage. From the very early stage we have incubators, accelerators and seed stage investors. In the growth stage, we have funders willing to invest a lot of money to really help a company take-off. This gives tech companies in Toronto a huge advantage.”
Allen Lau, CEO & Co-Founder, Wattpad
“Something that makes Toronto truly unique is that willingness to share and communicate with people very openly inside the industry looking at the global pie as something we can all co-create and achieve together.”
Satish Kanwar, Director of Product, Shopify
“In Toronto, Bombardier manufactures business and commercial aircraft and relies on the diversified, local regional supply chain. We work with more than 70 suppliers located in the Greater Toronto Area and we benefit from a variety of expertise going from complex machining to systems integration.”

Graham Kelly, Vice-President, Global Operations & Toronto Site, Bombardier Aerospace
"Toronto is emerging as a technology hub and attracting increased investment, including ours, because of forward thinking government and amazing access to technology, an incredible talent pool and leading educational institutions, as well as industries and markets in healthcare and financial services.”

Paul Rowan, Co-Founder and VP Inspiration, Umbra
“I think it’s an attractive place to come for talented people, it's a huge market for creative people and I think there are some companies emerging that give people hope that it can be done here.”
Mike McDerment, CEO/Co-Founder, Freshbooks
/