This year’s DRIVE 2019 conference, held in Waterloo for its inaugural year, set out to answer how Canada can create domestic value in a global tech economy.

DRIVE brought together policy-makers, researchers, accelerators, and tech CEOs from across Canada and around the world to discuss emerging trends, debate best practices and share ideas about Canada’s regional tech ecosystems and how they can thrive.

The three-day conference was co-hosted by Toronto-based Hockeystick and the Lazaridis Institute at Lazaridis Hall in Wilfrid Laurier University in Kitchener-Waterloo. The second day of the event featured a lineup of panels, keynote speakers and debates, ranging from the value of accelerators and venture capital insights, to the real-world applications of quantum computing.

DRIVE featured a discussion between Johan Wiklund, a professor at Syracuse University, and Menno Van Dijk, the founder and CEO of ScaleUpNation, who debated the value of accelerators and incubators in spurring growth.

Wiklund mentioned a study he conducted suggesting start-ups that began in an accelerator or incubator, performed worse than those that started on the market. Firms might be too comfortable in an incubator, he said, noting that it is difficult for a new venture to pivot and adapt in a tougher market environment if it has no prior market experience. Wiklund argued, firms that started outside an incubator performed better, likely because they had a better foothold in the market.

There are still plenty of problems with accelerators, namely, the cultures they promote.

“Incubators are a vehicle for people to realize their full potential,” said Wiklund. “People get into entrepreneurship for all sorts of individual reasons, I think it’s important that whatever infrastructure you have to support that, [incubators] embrace the fact that people are in this for different reasons, and support them in what they’re trying to accomplish.”

Van Dijk argued that there are still plenty of problems with accelerators, namely, the cultures they promote. He said the idea of collaboration and co-creation makes it impossible to get people to work together on the same floor, in different offices, where everyone is fed through the same structure. He said, real entrepreneurship, which is based on luck and opportunism, isn’t reflected in a half year period, or in a “student dorm” set-up with “ping pong tables and funny posters on the wall.” Wiklund also criticized start-up culture for not appealing to a diversity of background or thought.

“All incubators and accelerators look essentially the same,” Wiklund said. “They run very similar programs and accept very similar people – white or Asian men, aged 25 to 40, that are very socially competent, drink coffee and ride bicycles. If you want to have an ecosystem that is sustainable, it cannot be a monoculture.”

“If [accelerators] help a whole society feel pride and longing about innovative entrepreneurship, even if those entrepreneurs build something that in the end never works, it doesn’t matter,” he stated.

The new revolution of quantum computing

The conference also turned to discussions on Waterloo’s ‘Quantum Valley’, and what the real-world applications of quantum computing could be for the world. The panel featured Martin Laforest, senior product manager at ISARA Corporation, John Donohue, scientific outreach manager at the Institute for Quantum Computing, Damian Pope, senior manager of scientific outreach at the Perimeter Institute, as well as Shohini Ghose physics & computer science professor at Wilfrid Laurier University.

“It’s important that we recognize that quantum computing is not some dream, it’s real,” said Laforest. “We haven’t figure out how exactly it will be used, and we don’t know most of the impact it’s going to have. But yes, [quantum computing] is possible.” 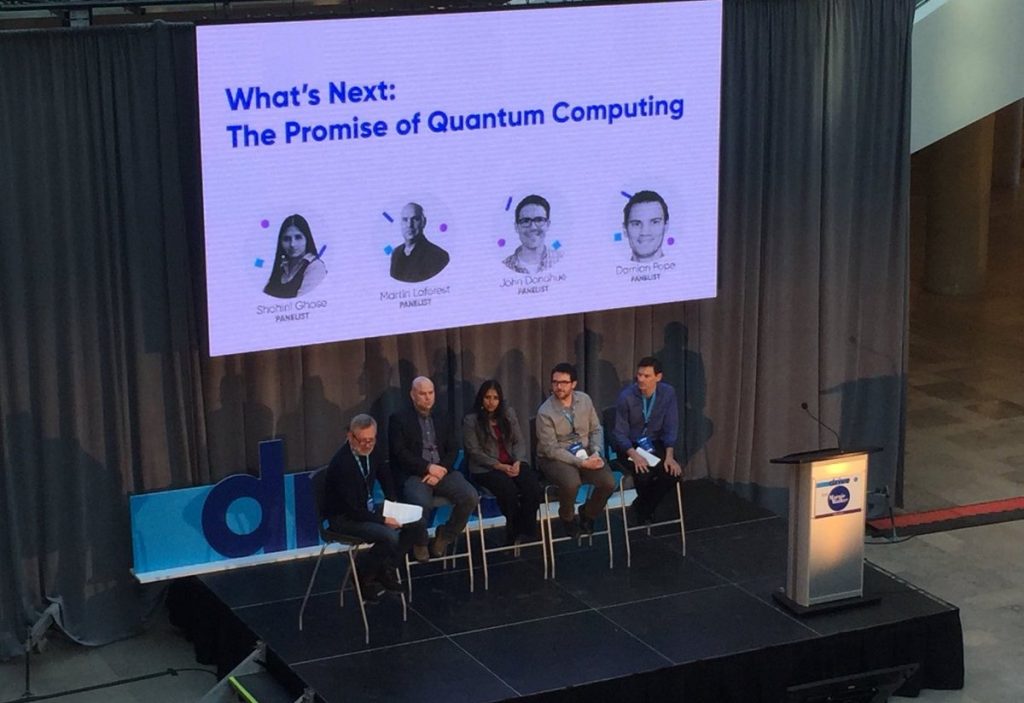 “We’re in the middle of a big paradigm shift,” said Pope. “If we can harness quantum, we can build technologies that are fundamentally different and better than what we have now. The first quantum computer could be more powerful than all other computers in the world, combined.”

The panel also highlighted some of the biggest misconceptions that exist surrounding quantum and its applications to technology. The most common misconception, Laforest noted, is that quantum computers will likely not be available for consumption.

“We’re not going to be walking around with quantum laptops or quantum phones,” he said. “I expect they will be accessed in the same way a supercomputer will be.”

“I think this in new revolution we are in, we have to think in a revolutionary way about the impact [of quantum computing on] society,” said Ghose. “We should be asking who has access, who is building these technologies, and how do we create a truly inclusive ecosystem.”

Another panel at DRIVE was centered on getting a closer look at the different types of capital in scale-up ecosystems, namely public and private. The panel included Darrell Pinto the COO of the CVCA, Natalie Fratto, VP of early stage practice & Canadian expansion at Silicon Valley Bank, and Jim Valerio, director of research & BDC policy at ISED’s Small Business Branch.

The rate of venture capital investment is not growing parallel to the growth rate of startups.
-Natalie Fratto, Silicon Valley Bank

Valerio said in terms of loans requested and authorized, Canada scores well against other countries. Access to venture capital is increasing he said, with $3.7 billion in access – the highest amount available since 2001.

“Overall, Canada is doing very well,” he said. “This is attributable to the fact that players are coming to Canada to invest. This bodes well for Canada, and certainly, that has been reflected in large returns.”

Fratto noted what is unfortunate about the capital landscape, however, is that the rate of venture capital investment is not growing parallel to the growth rate of startups. She cited a Silicon Valley Bank survey which found 10 percent more of Canadian startup founders said it was extremely difficult to raise capital, compared to their American counterparts.

In speaking about DRIVE in its inaugural year, Kim Morouney managing director of the Lazaridis Institute, and co-chair of the event, said she hopes DRIVE will encourage Canada’s tech players to continue to scale their companies and thrive both in Canada and around the world.

“Waterloo’s reputation as a tech hub continues to expand,” Morouney said. “DRIVE will enable us to share our ecosystem’s energy and vision with global players – international hubs, founders and policy-makers – and to learn from their diverse perspectives on growth.”

#DRIVE #Hockeystick #Institute for Quantum Computing #ISARA #Lazaridis Institute #Perimeter Institute #Quantum Computing #ScaleUpNation
StartUp HERE
Tweets by startuphereTO
“Something that makes Toronto truly unique is that willingness to share and communicate with people very openly inside the industry looking at the global pie as something we can all co-create and achieve together.”
Satish Kanwar, VP of Product, Acceleration, Shopify
"Startups in Toronto benefit from support at every stage. From the very early stage we have incubators, accelerators and seed stage investors. In the growth stage, we have funders willing to invest a lot of money to really help a company take-off. This gives tech companies in Toronto a huge advantage.”
Allen Lau, CEO & Co-Founder, Wattpad
“In Toronto, Bombardier manufactures business and commercial aircraft and relies on the diversified, local regional supply chain. We work with more than 70 suppliers located in the Greater Toronto Area and we benefit from a variety of expertise going from complex machining to systems integration.”

Dr. Ilse Treurnicht, Former CEO, MaRS Discovery District
“The scale and quality of meet-ups and conferences and speaking events have gone up dramatically. You don’t need to leave Toronto to build a successful company.”
Evgeny Tchebotarev, Co-Founder, 500px
“I think it’s an attractive place to come for talented people, it's a huge market for creative people and I think there are some companies emerging that give people hope that it can be done here.”
Mike McDerment, CEO/Co-Founder, Freshbooks
"If you come to our studio and take a look at the people sitting around the table discussing ideas, they’re from almost every part of the world. I think it has really helped Umbra create an international style.”