Home
Close Menu
Get Social with Us
Raw Signal Group Explains When to Mentor, When to Coach at #FutureMakers

Securing senior talent is often top of mind for growing Canadian tech startups, but retaining and supporting junior talent to take on leadership roles is generally viewed with disdain.

This week, RBC hosted its latest FutureMakers Talks event on leading tech teams effectively. Management isn’t the sexiest topic in tech, but it’s key to building a culture that helps people scale with the business, and the night provided an opportunity to hear from leaders who have done it before.

The evening kicked off with a keynote from Melissa and Johnathan Nightingale, the co-founders behind leadership training company Raw Signal Group (the Nightingales are also regular contributors to BetaKit). The core of their talk focused on explaining the difference between mentoring and coaching employees; while mentoring includes giving advice and providing perspective based on past experiences, coaching helps people seeking advice come to a conclusion on their own through conversation.

“It’s important to know those not in management can still be leaders.”

There’s nothing inherently wrong with either method, but the Nightingales suggested the issue lies in tech leaders automatically defaulting to mentoring when someone just needs coaching. “That’s the tool we use all the time. It’s the tool used for teaching people about programming or surfing or photography, and it’s the tool we use when it’s totally out of line,” said Johnathan.

To understand coaching, Johnathan gave the example of rubber duck debugging; when a developer runs into a problem they can’t seem to solve, they force themselves to explain the problem to a rubber duck. Having a conversation—even with someone who doesn’t know anything about the problem to be solved—forces developers to explain and contextual the problem, often leading them the solution in the process of explaining. 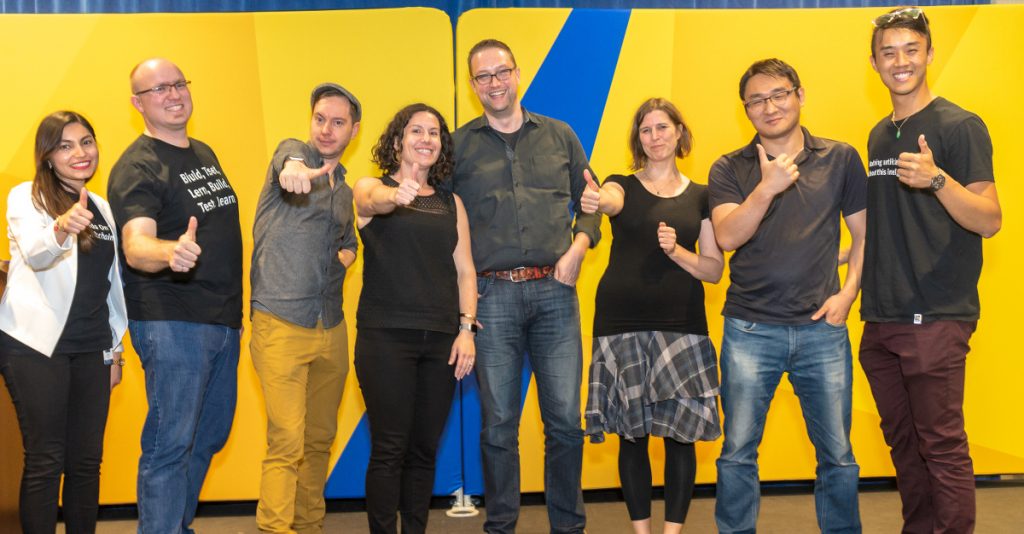 Melissa stressed that it’s key for tech leaders to understand what kind of conversation they’re having before they have it. “Tech is really good at mentoring, we have some work to do on coaching. When you are a mentor, you’re orienting around the problem that the mentee is describing to you,” she said, such as learning how to code or building a marketing plan. “You’re pulling from stories from own experience where you solved that problem.”

Coaching, on the other hand, is ‘individualized problem exploration.’ “[It means] you have the answer, I’m going to hold up the mirror and help you find it.”

Hands-on learning is my favourite kind of learning, never expected to experience it at a talk! Great way to experience mentoring vs coaching at #FutureMakers. Nicely done @shappy and @johnath ??? pic.twitter.com/zuvrH81atx

Han shared his experience of launching StackAdapt, which sits at 95 employees today. Managing a team were skills he picked up over time, and one of his key learnings was the importance of encouraging ownership on the team. As the team grows and managers begin to delegate responsibility, team members need to feel that ownership early on.

“It’s about helping your team understand how fast they need to go in your industry and how that balances with quality.”

“Your job is to put pieces together in a way where you’re maximizing the efficiency and innovation of your team. It’s important for you to let them know of the importance of ownership and responsibility early on,” Han said. “You’re probably not going to be able to do that as much as the company grows. You’re going to have to give away those responsibilities.”

Hiring skilled talent also doesn’t automatically translate to operations running smoothly. Peart highlighted the importance of managers defining what quality means for teams to set them up for success in goal-setting and prioritization.

Catherine Sawatzky is a powerhouse! Look at the all dev experience! #FutureMakers #womenintech pic.twitter.com/qZr6TYsc8z

For technical talent in the room considering moving into leadership roles, Sawatzky shared her personal journey. An experienced senior developer that has transitioned to managing development teams, Sawatzky argued that organizations should be set up in a way that makes room for different types of leadership styles, as leadership does not always mean management; for example, someone can be a strong mentor in an organization.

At the same time, people making the decision to move into a leadership role should know what that looks like within the organization they work for.

“For a long time, because I wanted to keep focus on my technical craft and that’s what I really enjoyed, there wasn’t an outlet for me to do this in a way that I wanted to within previous organizations,” she said. “At my current place of employment, we can choose to be a tech lead or a people lead, or a combination of the two in a manner that suits us. I wanted to keep my technical focus while guiding a small group of people, and this lead role I have now was a chance for me to do that.

BetaKit is a FutureMakers media partner.

#FutureMakers #Raw Signal Group
StartUp HERE
Tweets by startuphereTO
“In Toronto, Bombardier manufactures business and commercial aircraft and relies on the diversified, local regional supply chain. We work with more than 70 suppliers located in the Greater Toronto Area and we benefit from a variety of expertise going from complex machining to systems integration.”

Graham Kelly, Vice-President, Global Operations & Toronto Site, Bombardier Aerospace
"Startups in Toronto benefit from support at every stage. From the very early stage we have incubators, accelerators and seed stage investors. In the growth stage, we have funders willing to invest a lot of money to really help a company take-off. This gives tech companies in Toronto a huge advantage.”
Allen Lau, CEO & Co-Founder, Wattpad
“I think it’s an attractive place to come for talented people, it's a huge market for creative people and I think there are some companies emerging that give people hope that it can be done here.”
Mike McDerment, CEO/Co-Founder, Freshbooks
"A culture of collaboration is really at the heart of what’s next in innovation. What’s exciting in Toronto is that we have local and international businesses partnering with the startup ecosystem and increasingly with the academic community to position themselves for success in the future. And it’s happening across the spectrum from digital media and information technology, to life sciences and healthcare, energy solutions and social innovation.”

Dr. Ilse Treurnicht, Former CEO, MaRS Discovery District
“Something that makes Toronto truly unique is that willingness to share and communicate with people very openly inside the industry looking at the global pie as something we can all co-create and achieve together.”
Satish Kanwar, VP of Product, Acceleration, Shopify
“The scale and quality of meet-ups and conferences and speaking events have gone up dramatically. You don’t need to leave Toronto to build a successful company.”
Evgeny Tchebotarev, Co-Founder, 500px
"If you come to our studio and take a look at the people sitting around the table discussing ideas, they’re from almost every part of the world. I think it has really helped Umbra create an international style.”