Canadian venture capital (VC) investment reached new heights in 2019, with a record $6.2 billion CAD invested over 539 deals, according to a new report from the Canadian Venture Capital and Private Equity Association (CVCA). All monetary figures are expressed in CAD.

The CVCA looked at VC and PE deals in Canada for the full year in 2019, compiled with data from Toronto-based Hockeystick’s platform. VC investment increased by 69 percent year-over-year. Around $3.7 billion was invested in 2018, triple that of 2013 when the CVCA first began its market analysis. The average VC deal size in 2019 was $5.6 million, an 11 percent jump from $5 million in the previous year.

“The performance of venture capital investment in 2019 is beyond positive and an indication of sustained confidence in the Canadian ecosystem,” said CEO of the CVCA Kim Furlong. “Canadian entrepreneurs have continued to aggressively grow their companies and Canadian VCs are helping push Canadian innovation forward.”

The findings of this report differ from PwC’s latest MoneyTree report, which found Canadian VC investments totalled $4.1 billion last year. This may be attributed to CVCA using data assembled from Hockeystick, while PwC’s report uses data from CB Insights.

Canadian information and communication technology (ICT) companies received the majority of VC investment, or 66 percent of total VC dollars, in 2019. Overall the ICT sector saw $4.1 billion in investment, nearly double what the sector tracked the year prior. 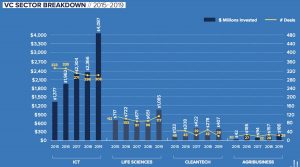 The CVCA’s report tracked some of the largest VC-backed exits from last year, one of which included Lightspeed POS’ TMX debut. The CVCA described last year’s exit environment as “healthy,” although there were 40 VC-backed exits valued at $3 billion, which represents no change since 2018.

The report also stated that the fourth quarter of 2019 significantly contributed to the year’s record-breaking total, with $1.6 billion invested over 144 deals during Q4. One of the largest deals of that quarter was Coveo’s $227 million round in November, which also included an exit for some of the company’s investors. 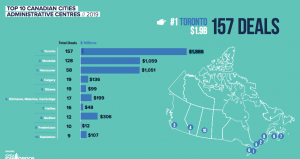 In 2019, Toronto continued to receive the most dollars invested, with $1.8 billion, comprising the majority of VC deals in Canada’s cities. Montréal came in second with just over $1 billion invested, overtaking Vancouver by only $8 million. Saskatoon also made it into the top 10 cities for investment, which it did not in 2018. The Saskatchewan city raised a total of $107 million in 2019.

The report broke down the number and value of deals between seed, early-stage, later-stage, and growth equity rounds. In 2018, the number of deals was mostly consistent across each funding stage but the largest amount of VC capital was invested into later-stage rounds. 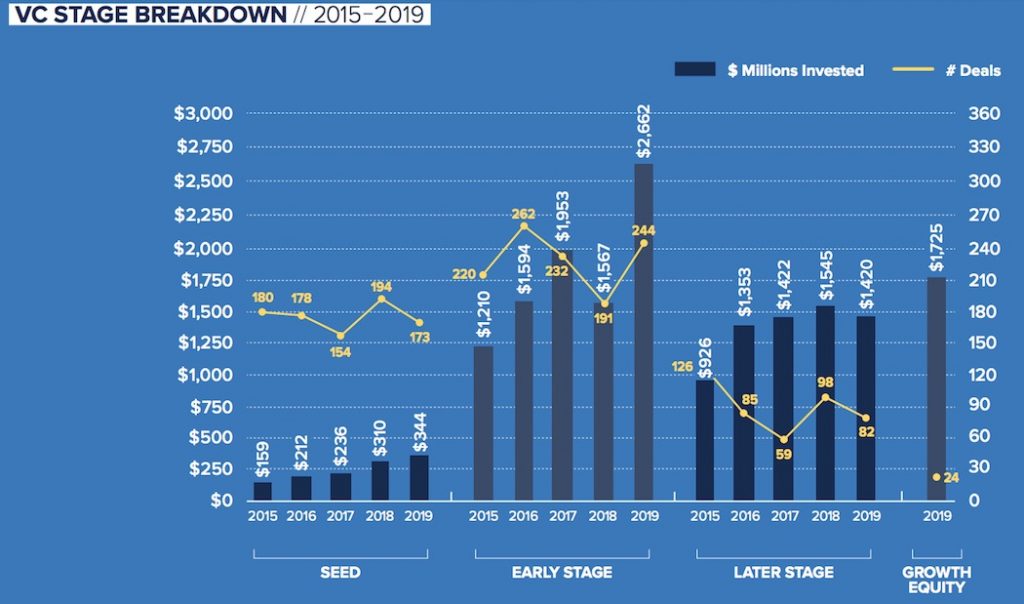 Although Canadian VC investment experienced striking growth in 2019, the CVCA’s report on PE found that investment declined compared to last year. PE investment totalled $19 billion, which is over 16 percent less than the $22.7 billion invested in 2018. However, Canadian PE investment was still 38 percent higher than the previous all-time low of $13.8 billion in 2016, according to the report.

Twenty-four percent of all PE investment in 2019 went into companies in the industrial and manufacturing sector, two percent higher than its share in 2018. The ICT sector maintained its deal flow in 2019 with a 17 percent share of PE investment.

Despite the overall decline, Furlong said private equity continues to pick up momentum as a source of value-add financing for companies in Canada.

“Canadian PE offers attractive returns and the opportunity to truly make a positive impact across the country as investors and investees grow Canadian companies together,” she added.

#1Password #Clio #Element AI #Hockeystick #Lightspeed #VCs #Verafin
StartUp HERE
Tweets by startuphereTO
“Something that makes Toronto truly unique is that willingness to share and communicate with people very openly inside the industry looking at the global pie as something we can all co-create and achieve together.”
Satish Kanwar, VP of Product, Acceleration, Shopify
"A culture of collaboration is really at the heart of what’s next in innovation. What’s exciting in Toronto is that we have local and international businesses partnering with the startup ecosystem and increasingly with the academic community to position themselves for success in the future. And it’s happening across the spectrum from digital media and information technology, to life sciences and healthcare, energy solutions and social innovation.”