Home
Close Menu
Get Social with Us
Slack, IBM, and RBC Provide a Path for Positive Digital Transformation at #FutureMakers

Whether big or small, digital transformation has a massive impact for organizations. The RBC FutureMakers Talks June event in Toronto tackled this subject head-on, looking at the need to build a sustainable culture, addressing issues of diversity and inclusion, and maintaining communication networks across the organization.

Welcoming the audience to the event, Ramesh Siromani, the Senior Vice President of Strategy & Transformation at RBC, said the phrase digital transformation “has been misused and overused for a very long time.” He went on to explain that digital transformation can be in response to customer needs or noticing industry shifts that will render a company obsolete if they don’t make changes.

After his welcome address, speakers from RBC, IBM, Bright + Early, and Slack took the stage to share their insights and journeys of digital transformation.

“You need a listening mechanism”

In a fireside chat with BetaKit Editor-in-Chief Douglas Soltys, Group Head of Technology & Operations at RBC, Bruce Ross, said that digital transformation is not about ripping and replacing, but adding to a company.

For RBC, an organization that’s been around for 150 years, Ross said, “it’s how you want to transform in addition to what it already is – not something else. You have to look at the strength of the organization and you can never forget what you’re in business to do and what your purpose is.”

Adding that RBC’s purpose is to help its clients thrive, Ross said that the digital transformation journey begins with listening to clients and focusing on client needs.

“It’s about how we advance clients’ lives in the digitization of this world so they can conduct business in the way they choose to,” said Ross.

Soltys questioned Ross further on this statement, asking how a big company like RBC can continue to innovate in tech while major tech firms like Google, Apple, and Amazon encroach on financial services with new product offerings. Ross responded that, historically speaking, large companies would never compete with their clients.

The ongoing overlap between tech and financial services companies means that historical unlikelihood is now a reality. “If you have a profit pool, it could be attacked by anyone,” said Ross.

To grow in this new business landscape, Ross said RBC has become more open to collaboration and thinks more critically about where its investment dollars are going.

“We realized we don’t have to build everything ourselves,” said Ross. “We can partner. The financial ecosystem of startups is a great opportunity. There was also a change in our culture in terms of where we invest. If you looked at our bank five years ago, we’d be looking at buying another wealth [management] company. Now we’re buying tech assets and tech companies that grow our capability.”

Alexis Zamkow, a Digital Strategy & Innovation Leader at IBM Services, spoke about IBM’s digital transformation, both in its services for clients and internally at the company.

“Why are businesses transforming?” Zamkow asked the audience. “To be relevant and to be of value. To delight customers, keep employees fully engaged, and deliver financially for your stakeholders.”

Similar to Ross’ comments on the evolution of global tech companies in new product categories, Zamkow added that big companies face a lot of obstacles in “maintaining relevancy.” This is something IBM knows fairly well, as the company has gone through many transformations – from hardware, to software, to services – in its over 100-year history.

Within IBM, Zamkow shared an example of using IBM Watson analytics to help recruiters make better decisions in the interview and onboarding process. The net result was savings of over $4,000 per employee, more successful hires, and less stress on the recruiting teams. This is one example of many that Zamkow said were not about the robots taking over, but making humans better.

“Watson augments our folks and makes them smarter at what they do,” she said. 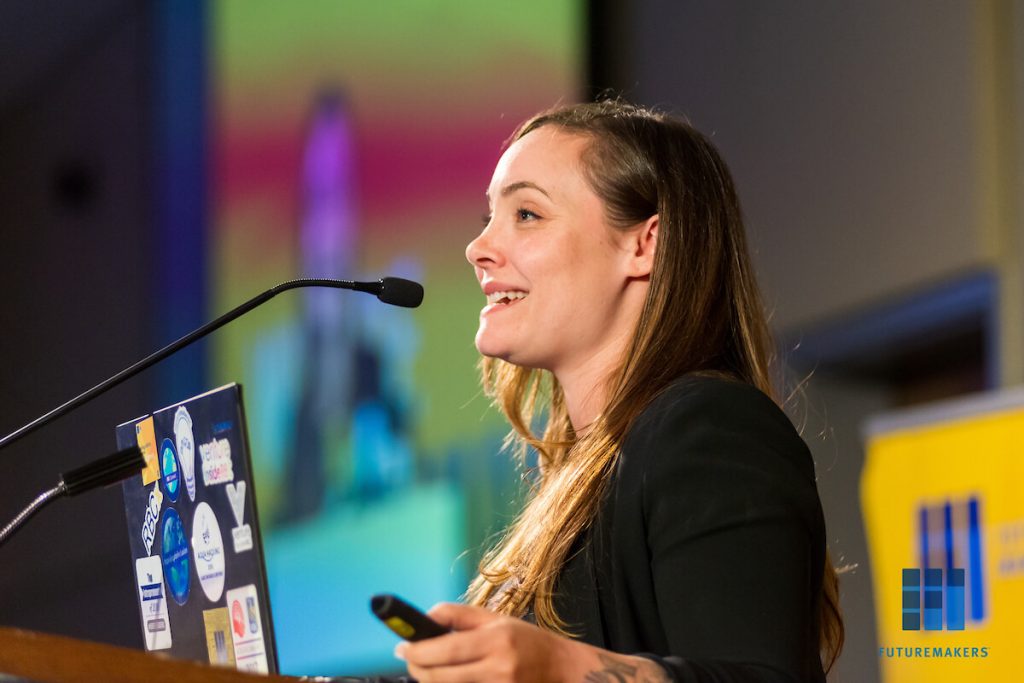 Tech is as flawed as the humans who build it

Challenging the idea that more tech is always better, Nora Jenkins Townson, founder of HR consultancy Bright + Early, explained how data crunching machines carry with them the biases of their creators.

Speaking about a previous talent job she held at a Toronto startup, Jenkins Townson explained how they took stock of their top performers – “the ones who were killing it,” as she described – and looked at common features. The company noticed a couple of data-based similarities and went about finding more of the same.

The project was terrible for overall team diversity and was soon scrapped. It turned out that the top performers were great, but only looking for more of them was detrimental to the organization: preventing them from finding the people necessary to go the next stage of growth. The data was inherently flawed and biased, because the humans compiling it were biased.

“Tech is a tool that tends to learn from its masters,” Jenkins Townson said. “As much as we try, tech is not always a tool to replace decisions.”

She went on to say that in areas with definitive answers, “the math either adds up or it doesn’t. The software either works or it doesn’t.” Technology can replace manual processes and, but it does not provide the best outcomes without factoring for incredibly complex decisions where emotion plays a role.

“Tech does not make humans perfect; it simply scales us, flaws and all.”

What transforms the digital transformers?

Sharing the founding story of Slack, Director of Product Management Jaime DeLanghe explained that Stewart Butterfield and his founding team originally built Slack as a team communication tool. The group was building online games and needed a better tool for its remote, disconnected team.

The game did not take off, but investors saw potential in the communication tool they’d built: Slack.

At the crutch of change is communication, something DeLanghe said even Slack faced as a challenge in the early days.

“When people get excited, they just get going,” she said. “But if they are not going in the same direction, you get nowhere. To innovate, you need to connect disparate people and resources.”

For Slack, measuring increased communications efficiency is done in “skips” – that is, how many communication touch points does it take for you to get the information you need? Ideally, Slack pushes that number to one.

As the night wore on, each speaker reiterated that the point of ‘transformation’ is not about killing what’s good in order to become what’s new. It’s about growing, evolving, and becoming the next, better version of your organization – the version that is ready to take on the new challenges coming in the world.

“Digital transformation is about offering new and more options for those that want it,” said Ross. “It’s changing the dynamic, but not removing all previous options.”

BetaKit is a FutureMakers media partner.

#FutureMakers #IBM #RBC #Slack
StartUp HERE
Tweets by startuphereTO
“I think it’s an attractive place to come for talented people, it's a huge market for creative people and I think there are some companies emerging that give people hope that it can be done here.”
Mike McDerment, CEO/Co-Founder, Freshbooks
“In Toronto, Bombardier manufactures business and commercial aircraft and relies on the diversified, local regional supply chain. We work with more than 70 suppliers located in the Greater Toronto Area and we benefit from a variety of expertise going from complex machining to systems integration.”

Graham Kelly, Vice-President, Global Operations & Toronto Site, Bombardier Aerospace
"Startups in Toronto benefit from support at every stage. From the very early stage we have incubators, accelerators and seed stage investors. In the growth stage, we have funders willing to invest a lot of money to really help a company take-off. This gives tech companies in Toronto a huge advantage.”
Allen Lau, CEO & Co-Founder, Wattpad
“The scale and quality of meet-ups and conferences and speaking events have gone up dramatically. You don’t need to leave Toronto to build a successful company.”
Evgeny Tchebotarev, Co-Founder, 500px
"If you come to our studio and take a look at the people sitting around the table discussing ideas, they’re from almost every part of the world. I think it has really helped Umbra create an international style.”