Elevate arrived at Meridian Hall on Tuesday, featuring a diverse lineup of speakers from tech companies, government, and entertainment, all the way to outer space. Here are BetaKit’s highlights from Elevate Main Stage.

Canadian astronaut and Elevate co-chair Chris Hadfield took to the Main Stage to talk about how the history of human exploration and how it has always driven innovation.

Hadfield, a highly-decorated astronaut, engineer, and pilot, and author of three bestselling books took the audience through the “moonshots” of history, from the first civilizations all the way up to landing on the moon.

“If you’re willing to give yourself a goal, and then fail regularly along the way … you can accomplish incredible things,” Hadfield said. “As we want to continue to prove things not just within our family, but across every circle, what really drives my mind is the underpinning of technology.” 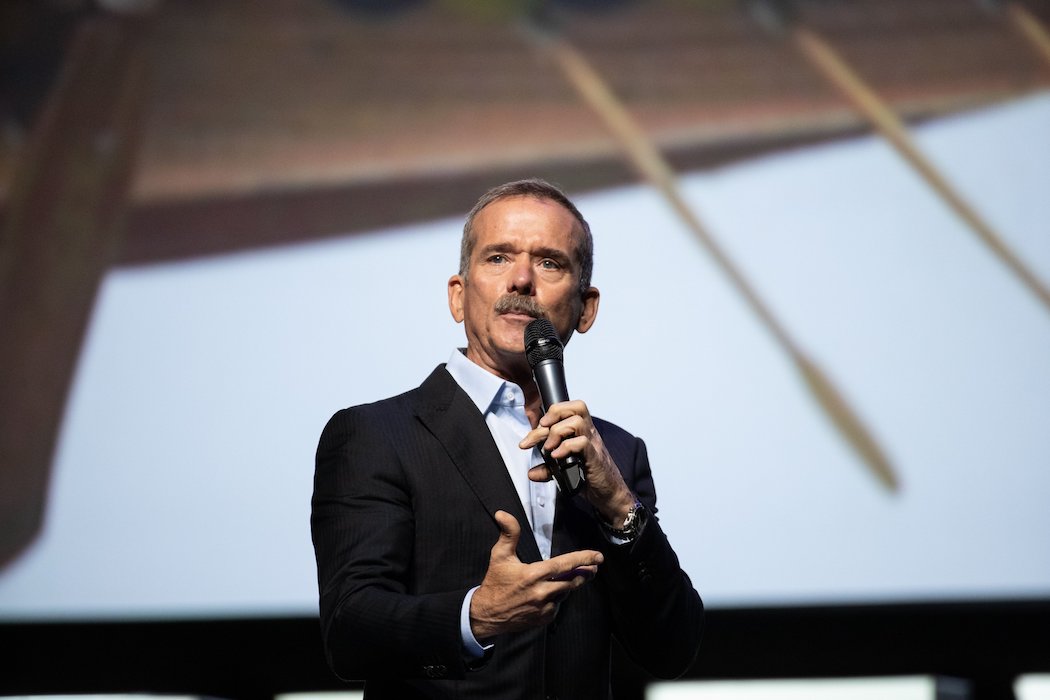 Hadfield also mesmerized the audience with a performance of his now-famous version of David Bowie’s space oddity, that he originally recorded on the International Space Station.

In the afternoon, Finance Minister of Canada Bill Morneau sat down with journalist Vicky Mochama to discuss how the federal government is planning to address some Canadian tech’s top challenges.

The minister, whose government is currently on the campaign trail ahead of the federal election, said one of the most important challenges faced by the government was that of wealth distribution, but that focusing on entrepreneurship was a key way to address wealth inequality and poverty.

“Thinking about this sector is very much about thinking about opportunities, giving people hope that the new emerging economy is going to be an opportunity for people to be successful,” Morneau said. “They’re not going to be left behind because they’re waiting.”

He also discussed how the government has invested in artificial intelligence research, including the Toronto-based Vector Institute as well as a number of research organizations in Montreal, which is minting a strong reputation in the sector. The minister said his view is that investment in these initiatives like these is critical to advancing Canada’s reputation on a global stage.

“The reason we invested significantly in [AI] is that we see this as a fundamental building block for our economy going forward,” the minister said. “We see ‘digital’ as foundational to virtually every business.”

Replicability is Dan Doctoroff’s measure of success for Quayside

Toward the end of the day, Sidewalk Labs CEO Dan Doctoroff spoke with BNN Bloomberg’s Amanda Lang about what’s on the horizon for the Alphabet company’s plans to redevelop Toronto’s Quayside neighbourhood.

Doctoroff said the project has been “long” and “drawn-out,” which is to be expected from such an unprecedented undertaking.

“The ultimate measure of success will be whether what we do here is replicable in other places.”
– Dan Doctoroff

“We have to find ways of making cities fairer, making them more affordable, making them easier to get around in making them more sustainable,” he said.”The best way to demonstrate that is by literally building some district or neighbourhood in which you can combine all of the different elements that go into making city mobility, the infrastructure system, buildings, the way the public realm functions, even social infrastructure, and demonstrate what’s actually possible.”

It was discovered earlier this year that Sidewalk was planning to develop an area much larger than originally alloted. The company’s master plan, released this summer, spurred criticism from former privacy commissioner of Ontario Ann Cavoukian and Waterfront Toronto’s Digital Strategy Advisory Panel, particularly on how data will be dealt with. Doctoroff reiterated, yet, again, at Elevate that open data was a cornerstone of the Quayside project, poitning to Sidewalk’s urban data trust.

“We don’t really need very much personal data,” Doctoroff said. “What we’ve actually proposed is that we don’t want it. We’ve said, let’s invest control of that data in government-sanctioned independent urban data trust, and if there are types of personally identifiable information that we think could add value and help improve quality of life, we have to apply for it.”

“The ultimate measure of success will be whether what we do here is replicable in other places,” he said. “We believe we’re in this moment in time that we desperately need to figure out new ways of living in cities.”

It was also announced on Tuesday that Elevate and the Design Exchange (DX) are partnering with the United Nations Development Programme (UNDP),to become the Canadian Headquarters of the UN Sustainable Development Goals.

As the Canadian headquarters of the Sustainable Development Goals, Elevate DX will be responsible for facilitating year-round programming and interactive spaces to create actionable solutions to some of the world’s biggest challenges, using design and technology.

This partnership comes after an agreement made by world leaders in 2015, committing to 17 sustainable development goals aimed at building a brighter future by the year 2030, some of which include ending poverty, reducing inequality, and tackling climate change.

#Elevate
StartUp HERE
PARTNERS
Tweets by startuphereTO
Tweets from @startuphereTO/suhto-partners
“In Toronto, Bombardier manufactures business and commercial aircraft and relies on the diversified, local regional supply chain. We work with more than 70 suppliers located in the Greater Toronto Area and we benefit from a variety of expertise going from complex machining to systems integration.”

Paul Rowan, Co-Founder and VP Inspiration, Umbra
“The scale and quality of meet-ups and conferences and speaking events have gone up dramatically. You don’t need to leave Toronto to build a successful company.”
Evgeny Tchebotarev, Co-Founder, 500px
"Startups in Toronto benefit from support at every stage. From the very early stage we have incubators, accelerators and seed stage investors. In the growth stage, we have funders willing to invest a lot of money to really help a company take-off. This gives tech companies in Toronto a huge advantage.”
Allen Lau, CEO & Co-Founder, Wattpad
"A culture of collaboration is really at the heart of what’s next in innovation. What’s exciting in Toronto is that we have local and international businesses partnering with the startup ecosystem and increasingly with the academic community to position themselves for success in the future. And it’s happening across the spectrum from digital media and information technology, to life sciences and healthcare, energy solutions and social innovation.”

Dr. Ilse Treurnicht, CEO, MaRS Discovery District
“Something that makes Toronto truly unique is that willingness to share and communicate with people very openly inside the industry looking at the global pie as something we can all co-create and achieve together.”
Satish Kanwar, Director of Product, Shopify
“I think it’s an attractive place to come for talented people, it's a huge market for creative people and I think there are some companies emerging that give people hope that it can be done here.”
Mike McDerment, CEO/Co-Founder, Freshbooks
"Toronto is emerging as a technology hub and attracting increased investment, including ours, because of forward thinking government and amazing access to technology, an incredible talent pool and leading educational institutions, as well as industries and markets in healthcare and financial services.”