Thawing from the winter chill, the March edition of the RBC FutureMakers Talks was an insightful discussion on practical solutions for navigating user experience in app development.

Bringing together a selection of tech innovators, the discussion shone a light on one central theme: innovation can only happen when you deliver an amazing user experience. That experience is generated from product design that is mindful, simple, human-focused, ethical and accessible.

According to the speakers at FutureMakers, delivering that amazing user experience is the new driver of business success. It’s no longer about solving a problem, but about creating intuitive products to meet users’ rising expectations.

THE MAGIC HAPPENS WHEN PRODUCTS ARE EASY AND INTUITIVE

Huda Idrees, CEO of Dot Health, spoke first at FutureMakers, stating a belief that great products are about putting things into a simple context. “Operate on a level where everyone can understand what’s being put out,” said Idrees.

To Idrees, product design is about taking basic things and making them as simple and accessible as possible. “We rarely talk about accessibility when we talk about design,” she said. “Making something intuitive, obvious and simple, that’s where the magic is.”

Idrees pointed to Stripe, payment processing software that weaves magic by making it easy and intuitive for the customer to use. In contrast is Craigslist, the antiquated classified website, which has remained more or less the same since it launched. It’s not pretty, but it works, because Craigslist is built on community.

“Communities can’t be replicated by design,” said Idrees. “But most businesses are not designed around the community.”

Idrees also explored the question of how products come to be in the first place. Using Uber, Stripe, and Squarespace as examples, the CEO noted that these companies conceived their ideas from a simple premise: exploit an area that’s left wide open by an existing company.

Idrees took the audience on a journey down memory lane with a screenshot of GeoCities, a service she dabbled in during her youth. The internet looks a lot different than it did when the first webpages were created 30 years ago, but Squarespace is servicing a similar need today. “We don’t change, but the technology around us does,” she said.

Referencing the Steve Case book The Third Wave, Idrees outlined the three technological waves of the internet: the first wave was about building the internet, led by the Ciscos, IBMs and Apples of the tech world, and driven by people, products, platforms, and partnerships. The second wave was the app economy, where search and social reigned supreme, led by Google, Amazon, Facebook, and Twitter. We’re now in the third wave of the internet the wave that will mimic the first – driven by people, products, and partnerships. But who gets to lead that wave is still undetermined.

DESIGNING WITH DIGITAL HEALTH IN MIND 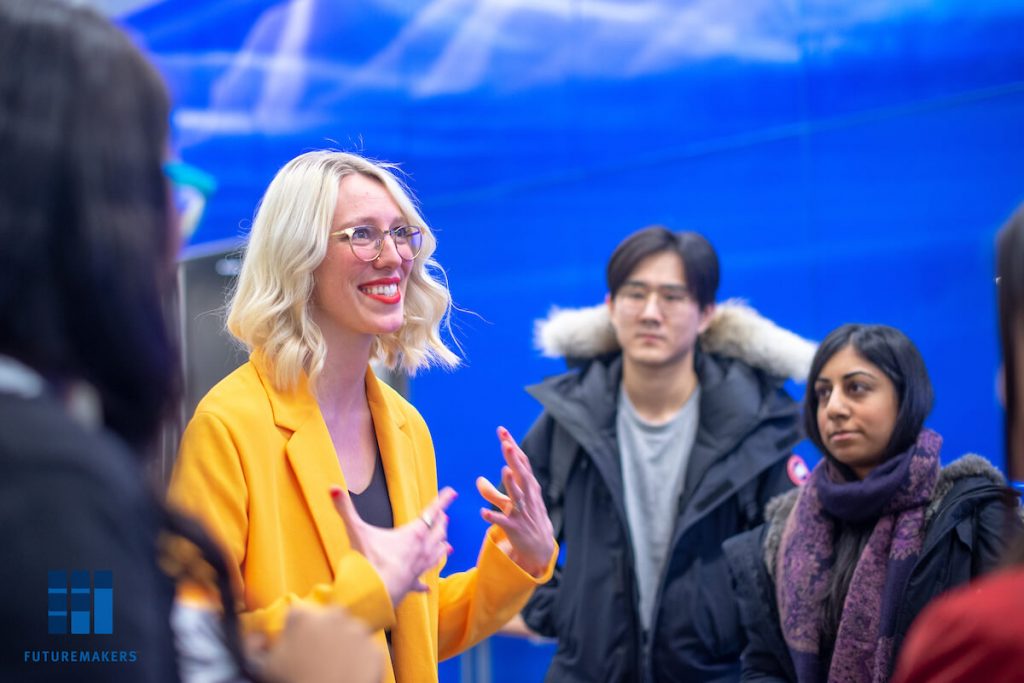 Next up, Andréa Crofts, Director of Design at League, discussed the responsibility that designers face in building digital products and services, addressing the rise of mental health concerns and stress in the workforce.

That stress is often produced by the way products are designed: to keep us in habit-forming loops. Crofts used Netflix as an example – by allowing new episodes of a TV show to autoplay without interruption when the previous episode is done, the product keeps you passively engaged.

And what about our addiction to endless scrolling apps like Twitter, Facebook, and Instagram? Each scroll is designed to target a pleasure centre and give instant satisfaction without lasting fulfillment. That constant connection can lead to a disconnection, which is where digital health comes to play. Crofts argued that there should be more collaboration between designers and wellness practitioners for a human-centred approach to design.

“Design ethics will get us back on track,” Crofts said. That means that designers should create products that are more human-centred and less tech-focused. “It’s time for a hard re-start in breaking the cycle of making us addicted to our tech,” she continued. “And that can start with our design ethics.”

So, how do we do that? First, allow the users to enter a ‘flow state’. We all know that ideal state of being in the zone, immersed in what you’re doing without distraction. Crofts noted that it takes approximately 23 minutes to get on task after an interruption.

Human-centred design is about giving the power back to the user and letting them choose how they use their apps, and when. The outcome becomes less about how much time a user spends on an app, and more about how much value they get from a mental health perspective. Crofts encouraged designers to create products with people’s digital well-being at the centre, that generate habit-forming loops for good, like apps that help you save money or encourage healthy lifestyle choices.

Hand in hand with ethics in product design is accessibility. Alicia Jarvis, Inclusive Design Practice Lead at RBC, stated that many of the capabilities designed for people with disabilities are functions that benefit everyone, like a hands-free feature on your smartphone.

While Jarvis said that Apple has been a leader when it comes to integrating accessibility features, she also noted that the technology that powers accessibility features like Siri has been around for decades. With people with disabilities accounting for 1.3 billion people globally, Jarvis indicated that more thought and focus needs to be dedicated on leveraging inclusive tech.

IS YOUR APP BETTER THAN A PENCIL?

Ernest Yap, Co-Founder & CEO of Shapetrace, talked about designing for a world with augmented and virtual reality (AR/VR), calling it the “fourth transformation of digital technology.”

“Augmented reality is really about utility,” said Yap. That means designers are enhancing the real world with just a little bit more information.

But as designers, creating a mixed reality world presents its own set of challenges. You have to think outside the usual constructs of designing for mobile and desktop and consider physical flow because that now becomes your operating system. How large is the space? What are the objects that will move in and out?

“You have to design like an architect more than anything else,” said Yap. The challenge with augmented reality is that users expect a high level of design and for it to work instantaneously.

Yap had his ‘a-ha’ moment when he noticed construction workers choosing to use paper and a pencil to jot down notes instead of the complex AR app that his team had built due to the cold weather.

Yap’s advice to AR designers: be better than paper and a pencil.

Tickets for the next RBC #FutureMakers event on April 24th range from $7-15, but BetaKit readers can get in FREE using the promo code “BetaKitPROMO”.

#Dot Health #FutureMakers #League #RBC #Shapetrace #UX
StartUp HERE
Tweets by startuphereTO
“I think it’s an attractive place to come for talented people, it's a huge market for creative people and I think there are some companies emerging that give people hope that it can be done here.”
Mike McDerment, CEO/Co-Founder, Freshbooks
"A culture of collaboration is really at the heart of what’s next in innovation. What’s exciting in Toronto is that we have local and international businesses partnering with the startup ecosystem and increasingly with the academic community to position themselves for success in the future. And it’s happening across the spectrum from digital media and information technology, to life sciences and healthcare, energy solutions and social innovation.”

Paul Rowan, Co-Founder, Umbra
“Something that makes Toronto truly unique is that willingness to share and communicate with people very openly inside the industry looking at the global pie as something we can all co-create and achieve together.”
Satish Kanwar, VP of Product, Acceleration, Shopify
“The scale and quality of meet-ups and conferences and speaking events have gone up dramatically. You don’t need to leave Toronto to build a successful company.”
Evgeny Tchebotarev, Co-Founder, 500px
/