Canadian venture capital investments in the first half of 2019 hit a record high of $2.15 billion, according to the Canadian Venture Capital and Private Equity Association’s (CVCA) latest report.

The investments in the first half of 2019 surpassed the previous highest half, H1 2018, which saw $1.7 billion in venture capital investments. The second quarter of 2019 also marked the highest amount of VC dollars invested since 2013, with $1.28 billion overall. The quarter, which made up more than half of the H1 2019, surpassed the previous highest quarter, Q4 2018, which saw $1.25 billion.

“We’ve heard time and time again that Canada is experiencing a ‘moment,’ and the results we are seeing in H1 2019 is a testament to that.”
– Kim Furlong CEO, CVCA

While the amount of dollars invested increased overall, the number of deals decreased year-over-year; Q2 2018 saw $1 billion invested in 166 deals and Q2 2019 saw the capital invested in 143 deals.

The record quarter and half can be attributed to the 11 “mega-deals” (more than $50 million), that took place in H1, accounting for 42 percent of the total VC dollars invested. Four of those deals occurred in Q2. The largest round went to Hamilton biopharmaceutical company Fusion Pharmaceuticals, which raised a $140 million Series B. Wealthsimple, Carbon Engineering, ApplyBoard, North, and Fiix Software were also among the 11 mega-deals.

Information and communication technology (ICT) companies took in 54 percent of the total dollars invested in H1, with $1.2 billion across 144 of the overall 256 deals. Early-stage companies saw 45 percent of total investment ($973 million), with later-stage deals accounting for 40 percent.

“Canadian VC-backed exits are on a positive trajectory in 2019 which, in tandem with invested VC dollars, exhibit a healthy innovation ecosystem,” said Kim Furlong, CEO of the CVCA. “We’ve heard time and time again that Canada is experiencing a ‘moment,’ and the results we are seeing in H1 2019 is a testament to that”

Lightspeed, which completed its IPO in March, reaching a market capitalization of $1.1 billion CAD and Milestone Pharmaceuticals’ IPO on the NASDAQ ($468 million CAD), marked the two largest exit to date in 2019. Other top disclosed exits in H1 2019 include MaRS IAF-backed Aeryon Labs, Fanxchange, and Edesa Biotech.

RELATED: CVCA, other Canadian orgs pen letter to US over “onerous” investment law 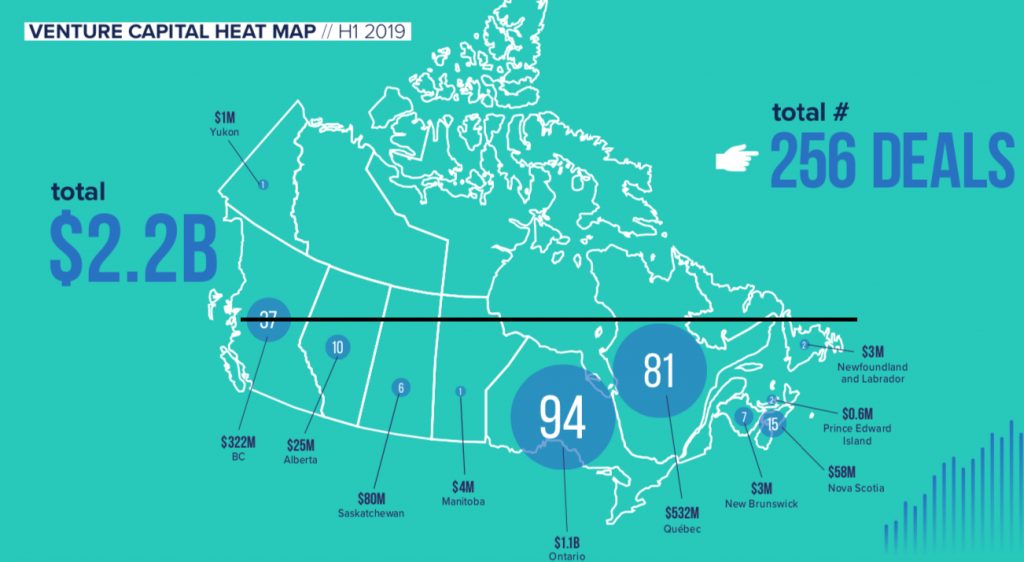 At the city level, VC funding appeared to be more evenly distributed compared to the same time last year. Whereas Toronto took in almost 50 percent of the total dollars invested in H1 2018, it only received 34 percent in H1 2019. Montreal saw an increase from 15 percent to 22 percent, while Vancouver dropped from an overall 16 percent of VC dollars in H1 2018 to just seven percent in H1 2019.

#VCs
StartUp HERE
PARTNERS
Tweets by startuphereTO
Tweets from @startuphereTO/suhto-partners
"Toronto is emerging as a technology hub and attracting increased investment, including ours, because of forward thinking government and amazing access to technology, an incredible talent pool and leading educational institutions, as well as industries and markets in healthcare and financial services.”

Dr. Rick Huijbregts, Vice-President, Industry Transformation, Cisco Canada
"Startups in Toronto benefit from support at every stage. From the very early stage we have incubators, accelerators and seed stage investors. In the growth stage, we have funders willing to invest a lot of money to really help a company take-off. This gives tech companies in Toronto a huge advantage.”
Allen Lau, CEO & Co-Founder, Wattpad
“I think it’s an attractive place to come for talented people, it's a huge market for creative people and I think there are some companies emerging that give people hope that it can be done here.”
Mike McDerment, CEO/Co-Founder, Freshbooks
“The scale and quality of meet-ups and conferences and speaking events have gone up dramatically. You don’t need to leave Toronto to build a successful company.”
Evgeny Tchebotarev, Co-Founder, 500px
"If you come to our studio and take a look at the people sitting around the table discussing ideas, they’re from almost every part of the world. I think it has really helped Umbra create an international style.”

Paul Rowan, Co-Founder and VP Inspiration, Umbra
"A culture of collaboration is really at the heart of what’s next in innovation. What’s exciting in Toronto is that we have local and international businesses partnering with the startup ecosystem and increasingly with the academic community to position themselves for success in the future. And it’s happening across the spectrum from digital media and information technology, to life sciences and healthcare, energy solutions and social innovation.”

Dr. Ilse Treurnicht, CEO, MaRS Discovery District
“Something that makes Toronto truly unique is that willingness to share and communicate with people very openly inside the industry looking at the global pie as something we can all co-create and achieve together.”
Satish Kanwar, Director of Product, Shopify
“In Toronto, Bombardier manufactures business and commercial aircraft and relies on the diversified, local regional supply chain. We work with more than 70 suppliers located in the Greater Toronto Area and we benefit from a variety of expertise going from complex machining to systems integration.”