Toronto-based Wealthsimple has secured a new $100 million investment round, led by Allianz X, the digital investment unit of German asset manager Allianz Group. The announcement was made today during a press briefing at Collision.

Coming shortly after a fresh $30 million in Q1 2019 from Power Corp and its subsidiaries (Power also participated in the new round), the funding is the first time in four years Wealthsimple has brought in an independent investor. The FinTech confirmed the round was all primary capital.

“We’re acquiring this entire generation of clients that are proving they want more and more of a relationship with us as we launch new services.”
– Mike Katchen

Beyond the size of the round, which is significant by both Canadian and international FinTech standards, Wealthsimple CEO Michael Katchen was quick to note how the company’s new investor can unlock and accelerate international expansion. Allianz Group is one of the world’s leading insurers and asset managers, and could perhaps be considered a geographical mirror to Power. Wealthsimple had great success acquiring customers through its partnership with Empower Retirement in the US, and the CEO indicated plans for similar partnerships in Europe with Allianz involved.

“With both Power and Allianz behind us now, we have two very strategic partners that a) understand what it takes to build a wealth management business, and b) understand that space globally,” Katchen said.

If Wealthsimple’s strategy for international growth is through partnerships, the plan back home is to continue capturing market share through new products and services. Katchen told BetaKit that Wealthsimple currently owns 70 percent of the ‘digital advice’ space in Canada.

“It’s obviously still a small space, and our problem is we have to grow it like crazy,” he said. “The more exciting part is that we have 150,000 clients now that are mostly young professionals that banks are really bad at servicing. So we’re acquiring this entire generation of clients that are proving they want more and more of a relationship with us as we launch new services.”

To that end, Katchen wants to build Wealthsimple into a full stack financial service. While the CEO was mum on which specific products the company would attack first, he did note Wealthsimple would lean on its investment backend. Potential partnerships with other FinTechs in the Power/Portag3 portfolio were also on the table. 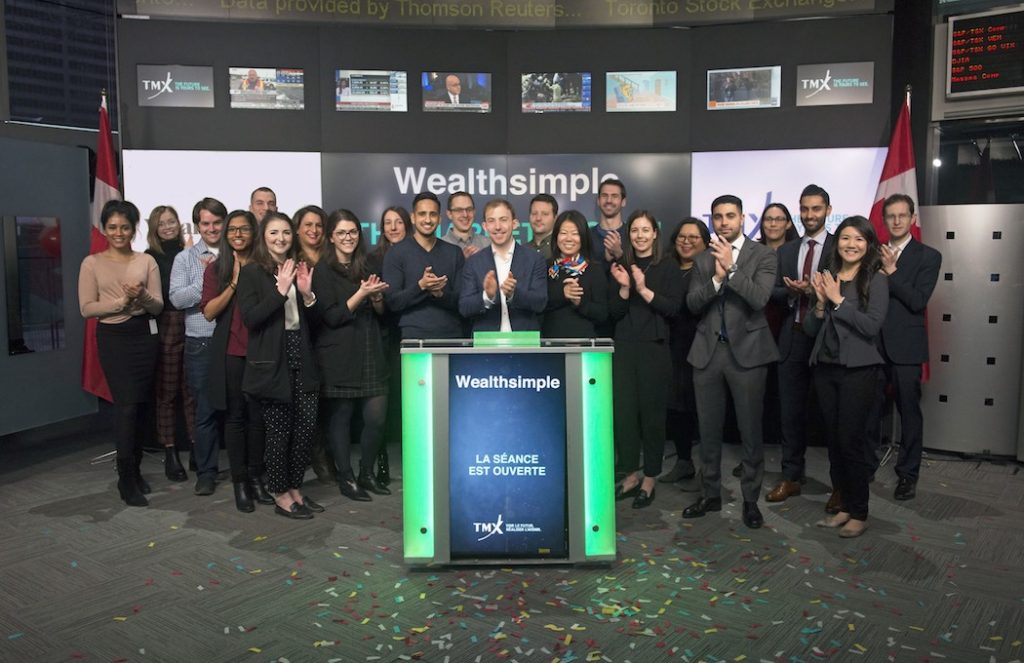 Katchen and the Wealthsimple team opening the TSX.

The goal is to get Wealthsimple to the size and scale to go public, something that Katchen said he’s “obsessed with.” While admitting that an IPO was still a few years down the road, Katchen already had a target of $20 billion in assets under administration (AUA) as the tipping point (the company recently announced $4.3 billion in AUA as of Q1 2019).

“’At what point do we care about this business?’” Katchen asked rhetorically, adopting the perspective of the incumbents in the Canadian marketplace. “Because banks were super dismissive when we launched. ‘That’s cute, but they’ll never make it. This is Canada after all.’”

“You build faith by being big, and looking big, and that’s why I’m obsessed with this idea of going public when we can. That’s the ultimate hallmark of self-determination and independence.”

“The answer was we got interesting at $8 billion in assets, which is right around the corner for us,” he continued.

There’s no complex financial mechanism behind the number. It’s simply a matter of trust.

“What we sell at the end of the day is trust,” Katchen said. “That is the hardest part of the business we’re in. We ask people to give us their life savings and we’re a new company. The biggest thing we fight against is the trust of these 200-year-old financial institutions that don’t have to fight for that.”

“You build faith by being big, and looking big, and that’s why I’m obsessed with this idea of going public when we can,” he continued. “That’s the ultimate hallmark of self-determination and independence: being a public company in control of its own destiny, versus a startup dependent upon outside capital.”

The idea of self-determination resonates on multiple levels. While it is well known that Power Corp and its subsidiaries have a majority ownership of Wealthsimple, multiple sources told BetaKit that reporting on the extent of that ownership (which, importantly, does not include other types of company ownership or unconverted shares, such as convertible bonds, warrants, and employee stock options) sent murmurs throughout the Canadian financial community last week.

For his part, Katchen was very clear that Wealthsimple’s unique relationship with Power had enabled them to do something that few other Canadian FinTechs have hoped to achieve. Faster, too.

“At the end of the day, even after this round we’ll be controlled by Power, in regards to their majority ownership,” he said. “It is rarer in the world of startups to have that relationship. I think for us it’s made a ton of sense because Power has given us capital and let us operate independently. So it’s really enabled us to accelerate our efforts very quickly and very meaningfully.”

“I love being able to take a generational perspective to building a business with Paul [Desmarais III, senior vice-president of Power Financial],” Katchen continued. “Paul’s not going anywhere. He wants to be in this business, he wants his kids in this business. You can’t have that point of view with a VC, and if you think you can I think you’re deluding yourself.”

#Allianz X #Fintech #Wealthsimple
StartUp HERE
Tweets by startuphereTO
“In Toronto, Bombardier manufactures business and commercial aircraft and relies on the diversified, local regional supply chain. We work with more than 70 suppliers located in the Greater Toronto Area and we benefit from a variety of expertise going from complex machining to systems integration.”

Dr. Ilse Treurnicht, Former CEO, MaRS Discovery District
“The scale and quality of meet-ups and conferences and speaking events have gone up dramatically. You don’t need to leave Toronto to build a successful company.”
Evgeny Tchebotarev, Co-Founder, 500px
"If you come to our studio and take a look at the people sitting around the table discussing ideas, they’re from almost every part of the world. I think it has really helped Umbra create an international style.”

Paul Rowan, Co-Founder, Umbra
“Something that makes Toronto truly unique is that willingness to share and communicate with people very openly inside the industry looking at the global pie as something we can all co-create and achieve together.”
Satish Kanwar, VP of Product, Acceleration, Shopify
“I think it’s an attractive place to come for talented people, it's a huge market for creative people and I think there are some companies emerging that give people hope that it can be done here.”
Mike McDerment, CEO/Co-Founder, Freshbooks
/