When thisopenspace launched in January 2016, founder Yashar Nejati hoped to tackle a problem he experienced himself as the former CEO of food startup Yummus: launching a pop-up shop. Acting as a marketplace with people listing their unused commercial and residential spaces, the Vancouver-based company would eventually move its team to Toronto and expand to Los Angeles, New York, and Ottawa.

On the heels of raising a $4.75 million seed round, the company is announcing a new brand based on what its learned from the past two years (and 5,000 stores launched) on the thisopenspace platform.

“We saw brands continuously launch online because things like Instagram help them flourish, but we saw them hitting a wall.”

The round was led by Lerer Hippeau, with participation from CRV, SV Angel, 3KVC, and Canadian angel Tom Williams. Uppercase is thisopenspace’s new company meant to help online brands expand into physical retail with access to retail experts providing insight into the local markets, in-store analytics, merchandising, and design. Brands will have access to a database of 500 national real estate partners, in-store data analytics, architects, and designers to help them build out stores.

Nejati will now act as CEO of Uppercase, while a small product team within the company will be dedicated to supporting thisopenspace. Speaking with BetaKit, Nejati said that the team launched Uppercase after finding that real estate was only one barrier merchants faced in launching a physical store.

“Brands are starting online, but they’re getting this feeling of how much they can grow online, and at some point, the cost of acquisition for them is better in retail and the lifetime value is longer,” Nejati said. “They get to the point that they want to open up retail stores, but they don’t have the internal team to do it quite yet. They don’t have the expertise, and it turns out there really isn’t a great way to even analyze how retail is performing.” 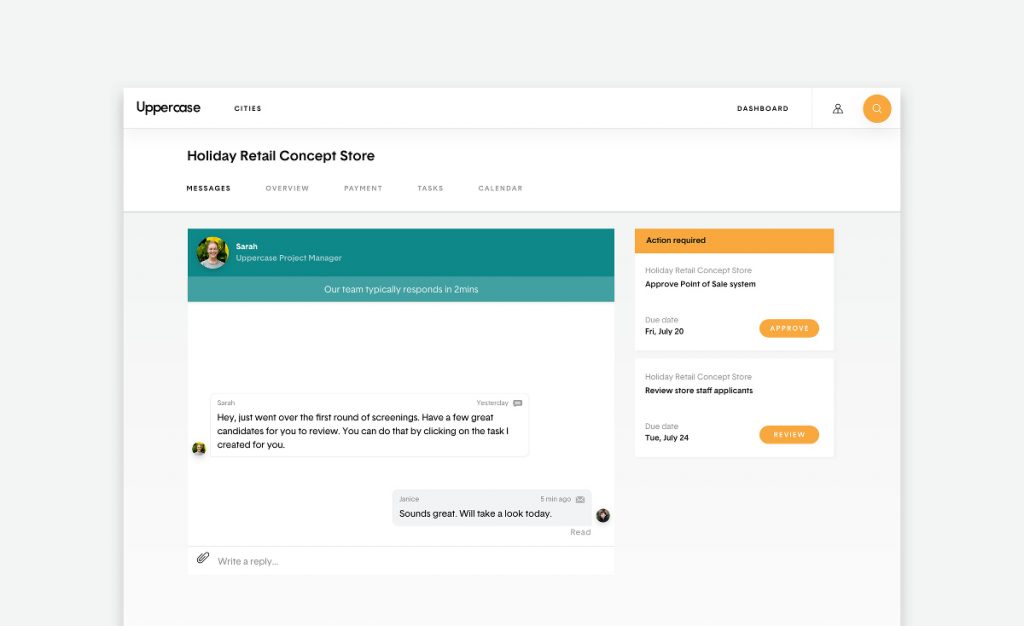 Companies like Warby Parker and Indochino—which started as online-only brands—are an example of ecommerce companies increasingly building out physical stores as they look to connect with customers on a “deeper level,” according to Nejati. Once predicted to fail due to the disruption from ecommerce, bricks-and-mortar has been bouncing back as an important next step of expansion for many online brands. Ecommerce giant Shopify has been increasingly focused on reaching customers looking beyond internet browsers, with a planned first physical location In Los Angeles, and more solutions aimed at reaching customers using pop-ups.

“Retail really is capturing a lot of the marketing spend of a brand used to spend online, but once they hit about $10 million in sales from what we’re able to see, the cost of online advertising starts being higher than launching the physical store,” said Nejati.

For Uppercase, the nexts steps are launching a store launcher app, a project management tool to help with payments, legal requirements, or creating RFPs for solutions a merchant would need. It’s currently in the research and development phase, building tech that can measure retail performance of both online and offline on an ongoing basis. Uppercase has already launched in New York, LA, and Toronto, and will go live in six other cities.

“Why we decided to double down on retail is we really saw a big opportunity in working with brands to help them continue growing. We saw brands continuously launch online because things like Instagram help them flourish, but we saw them hitting a wall,” Nejati said. “When they booked the physical retail space, we saw a lot of them having challenges launching the store beyond the real estate aspect. So working with our customers and learning from them to figure out why it was so challenging to launch physical stores, is a problem that we were excited to solve.”

#Retail #thisopenspace #Uppercase
StartUp HERE
Tweets by startuphereTO
"Startups in Toronto benefit from support at every stage. From the very early stage we have incubators, accelerators and seed stage investors. In the growth stage, we have funders willing to invest a lot of money to really help a company take-off. This gives tech companies in Toronto a huge advantage.”
Allen Lau, CEO & Co-Founder, Wattpad
“In Toronto, Bombardier manufactures business and commercial aircraft and relies on the diversified, local regional supply chain. We work with more than 70 suppliers located in the Greater Toronto Area and we benefit from a variety of expertise going from complex machining to systems integration.”

Graham Kelly, Vice-President, Global Operations & Toronto Site, Bombardier Aerospace
“The scale and quality of meet-ups and conferences and speaking events have gone up dramatically. You don’t need to leave Toronto to build a successful company.”
Evgeny Tchebotarev, Co-Founder, 500px
"If you come to our studio and take a look at the people sitting around the table discussing ideas, they’re from almost every part of the world. I think it has really helped Umbra create an international style.”

Dr. Ilse Treurnicht, Former CEO, MaRS Discovery District
“Something that makes Toronto truly unique is that willingness to share and communicate with people very openly inside the industry looking at the global pie as something we can all co-create and achieve together.”
Satish Kanwar, VP of Product, Acceleration, Shopify
/