Much of the world is waking up to the reality and urgency of climate change after a summer that included an unprecedented, globally-encompassing heatwave, as well as forest fires, flooding, and droughts.

The UN Secretary General recently warned that we may only have a couple years left to take decisive action to avoid runaway climate change, which could push the Earth into a “hothouse” state leaving parts of our world uninhabitable.

Luckily, we already have all the solutions needed to stop and reverse global warming, so now is the time to dig in and act!

The Centre for Social Innovation has just opened Climate Ventures, Toronto’s first cross-sector climate solutions incubator. Climate Ventures is a lot of things: it’s a dedicated space at CSI Spadina for climate entrepreneurs, innovators, and leaders to work. It’s a community within a community, with already 36 enterprises connected to each other and to our 2,500 members. It’s nearly 20 advisors volunteering their time. It’s a platform for us to hold peer circles, workshops, and events. And lastly, it’s a kind of climate consultancy developing programs in partnership with funders to support and scale climate solutions.

A recent report by the Global Commission on the Economy and Climate found that the world economy could grow by an additional US$26 trillion by 2030 if governments and businesses get serious about stopping global warming. Climate change is not just a threat; it’s also the greatest economic opportunity of the 21st century.

Around the world, entrepreneurs, innovators, investors, farmers, designers, architects, engineers, policy makers, systems thinkers, journalists, activists, Indigenous peoples, and others, have been laying the groundwork for the more sustainable, just, low-carbon economy of the future.

We started Climate Ventures to better support these trailblazers, and also to support the work of our broader community as climate change threatens to reverse the progress our members fight for. For example, global hunger has already reverted to levels last seen a decade ago due largely to extreme weather. 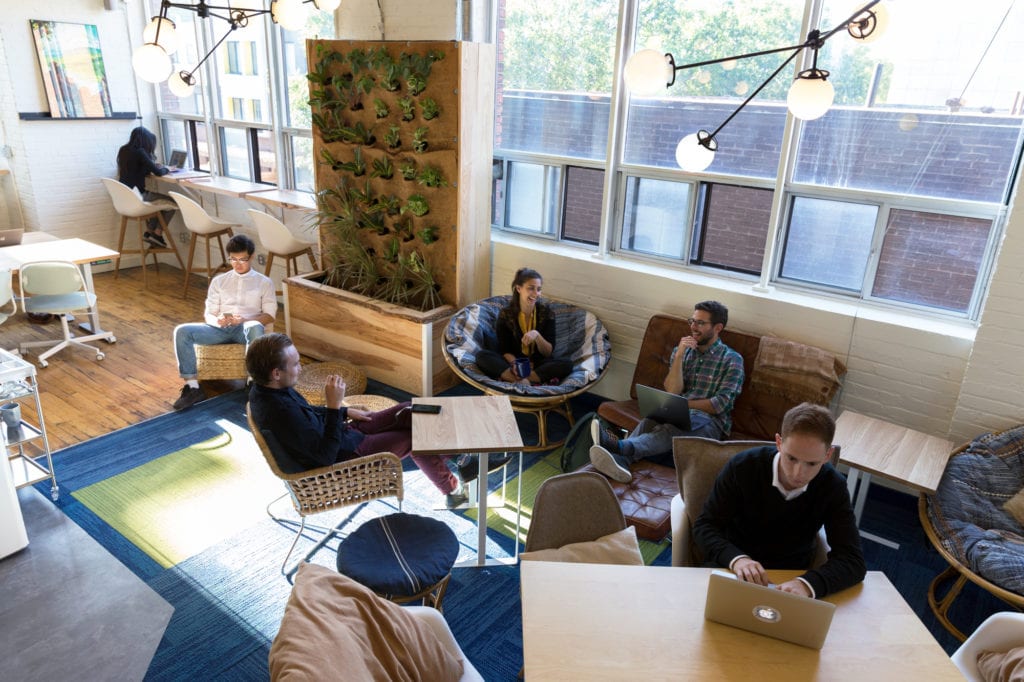 The Climate Ventures space was designed by Peggy Sue Deaven of Peggy Sue Collection, an award-winning, CSI-accelerated venture, for functionality, connection, and inspiration. Almost everything in the space has a sustainability story, such as being made locally by a member (green wall by Ripple Farms, tables by Just Be Woodsy) or out of low-carbon materials. We even have a light fixture in the shape of an HFC molecule made in Cabbagetown.

The Climate Ventures space includes Hot Desks and desk clusters, a lounge and meeting area, screens and a projector, a kitchenette, a meditation nook, and more, all part of CSI Spadina with its private offices, makerspace, member lounges, meeting rooms, event spaces, and hundreds of social entrepreneurs and innovators.

We opened Climate Ventures despite some pretty devastating funding cuts over the summer after the cancellation of the province’s cap and trade program. For a while, we weren’t sure we’d be able to pull it off. But we pushed through, and we’re determined to keep growing this important work.

#Climate Ventures
StartUp HERE
Tweets by startuphereTO
“The scale and quality of meet-ups and conferences and speaking events have gone up dramatically. You don’t need to leave Toronto to build a successful company.”
Evgeny Tchebotarev, Co-Founder, 500px
“Something that makes Toronto truly unique is that willingness to share and communicate with people very openly inside the industry looking at the global pie as something we can all co-create and achieve together.”
Satish Kanwar, VP of Product, Acceleration, Shopify
“In Toronto, Bombardier manufactures business and commercial aircraft and relies on the diversified, local regional supply chain. We work with more than 70 suppliers located in the Greater Toronto Area and we benefit from a variety of expertise going from complex machining to systems integration.”

Graham Kelly, Vice-President, Global Operations & Toronto Site, Bombardier Aerospace
"Startups in Toronto benefit from support at every stage. From the very early stage we have incubators, accelerators and seed stage investors. In the growth stage, we have funders willing to invest a lot of money to really help a company take-off. This gives tech companies in Toronto a huge advantage.”
Allen Lau, CEO & Co-Founder, Wattpad
“I think it’s an attractive place to come for talented people, it's a huge market for creative people and I think there are some companies emerging that give people hope that it can be done here.”
Mike McDerment, CEO/Co-Founder, Freshbooks
"A culture of collaboration is really at the heart of what’s next in innovation. What’s exciting in Toronto is that we have local and international businesses partnering with the startup ecosystem and increasingly with the academic community to position themselves for success in the future. And it’s happening across the spectrum from digital media and information technology, to life sciences and healthcare, energy solutions and social innovation.”