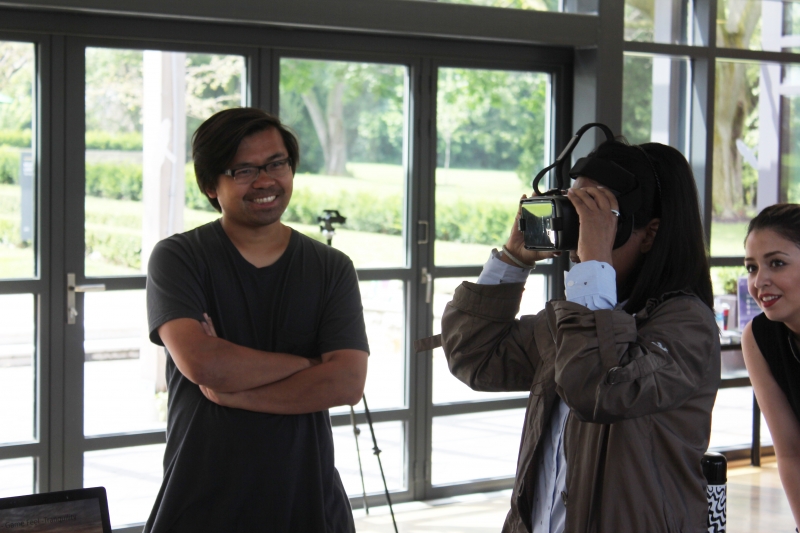 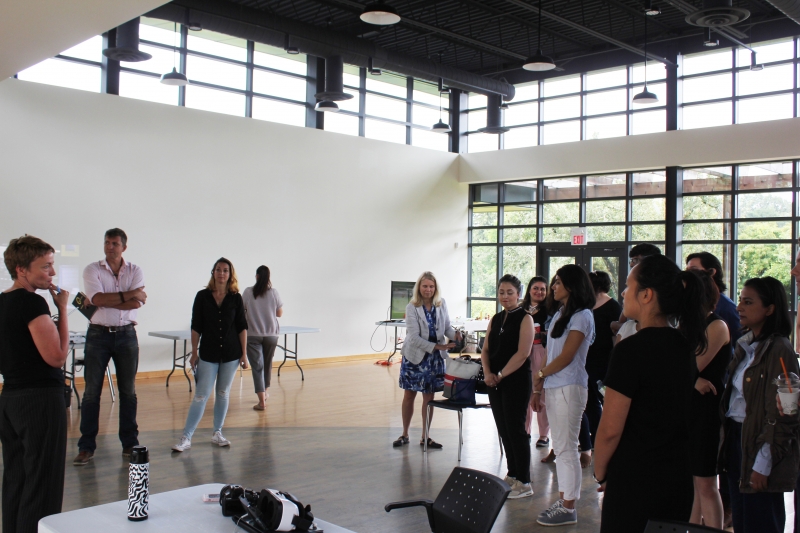 As part of an eight-week project for CFC Media Lab and Prototyping summer course, Digital Futures Masters students developed an interactive digital project in their chosen specialty area, with feedback from faculty and industry partners at OCAD U and the CFC (Canadian Film Centre) Media Lab. The course culminated in a final critique and public exhibition of the students' digital media prototypes in which each student presented their work. Some highlights of the eighteen student projects included:

Master of Design student and visual artist Afaq Ahmed Karadia, designed a machine learning system which uses cognitive data and gesture technologies to recognize and interpret movements of the human body. Afaq’s performance uses a “virtual instrument” controlled by gesture-based movements that interacts with a musical interface to generate sound. The prototype is part of his larger research project that examines the non-functional characteristics of gesture, such as expressivity, which remains a challenge for computers.

Thoreau Bakker's project, “Sculpting with VR,” uses Virtual Reality to both generate and visualize digital maquettes for future fabrication of digital sculptures at larger scales. This tool allows curators to visualize exhibitions and works before investing capital and resources into their production.

Sara Gazzaz's project, “Islamic Prayer Rituals,” examines how Muslims cope, reflect, and explore spiritual seeking prayer rituals in new secular spaces. Her project emphasizes the importance of preserving cultural identity within Muslim immigrant communities in Canada. Sara created a prototype of a prayer mat equipped with sensors that trigger LED lights in sequence with prayer movements. The interactive mat will help to collect data for the creation of a documentation video of prayer rituals.

Interestingly, many of the students’ prototypes involved technologies that limit or eliminate the need for human-to-human interaction. This was a common theme identified by the panel of industry experts; an area in the digital technology field where more research is needed to better understand new social realities.

Students began the prototyping process with the research and development stage, followed by model building, user trials, instantiations, and other forms of prototyping to help focus their primary research interests.

Dr. Emma Westecott, Associate Professor and instructor of the CFC Media Lab summer course, moderated the prototype presentations and panel discussions throughout the day: “I was thrilled to work with CFC Media Lab to enable our students to complete initial prototypes for their thesis projects. Feedback from CFC experts and industry advisors was invaluable in connecting student concepts to future application, offering them expertise central to ongoing work.”

Students were also tasked with creating an “elevator pitch” to convey their prototypes in five minutes or less. After presenting their pitch, each student received feedback and advice from an expert panel of judges on how to improve the product's marketability, viability and revenue model.

Read all
Communitech: Communitech Ask Me Anything Sessions: Partnerships

Communitech: Ask Me Anything Sessions: The Virtual Interview

Communitech: Ask Me Anything Sessions: Regain Business Momentum with CORE Leadership Through COVID-19 & Beyond

#CFC Media Lab #Digital Media
StartUp HERE
PARTNERS
Tweets by startuphereTO
Tweets from @startuphereTO/suhto-partners
"If you come to our studio and take a look at the people sitting around the table discussing ideas, they’re from almost every part of the world. I think it has really helped Umbra create an international style.”

Paul Rowan, Co-Founder and VP Inspiration, Umbra
“Something that makes Toronto truly unique is that willingness to share and communicate with people very openly inside the industry looking at the global pie as something we can all co-create and achieve together.”
Satish Kanwar, Director of Product, Shopify
“I think it’s an attractive place to come for talented people, it's a huge market for creative people and I think there are some companies emerging that give people hope that it can be done here.”
Mike McDerment, CEO/Co-Founder, Freshbooks
"Toronto is emerging as a technology hub and attracting increased investment, including ours, because of forward thinking government and amazing access to technology, an incredible talent pool and leading educational institutions, as well as industries and markets in healthcare and financial services.”