A startup bio-technology company that has found an innovative way to boost the quality of production in various industries, from paint and textile to winemaking and water filtration, has taken the top prize in an annual competition for entrepreneurs.

BIOSA Technologies was one of three finalist teams, whose founder was a graduate of York University’s LaunchYU Accelerator program led by Innovation York.

A panel of judges were tasked with choosing the venture with the highest potential for commercial success and judged each team on their ability to take their venture to market and scale. The winner receives the $25,000 Aird & Berlis StartupSource Market Entry Award, including $12,500 cash and an equal amount in legal services from Aird & Berlis StartupSource legal services. 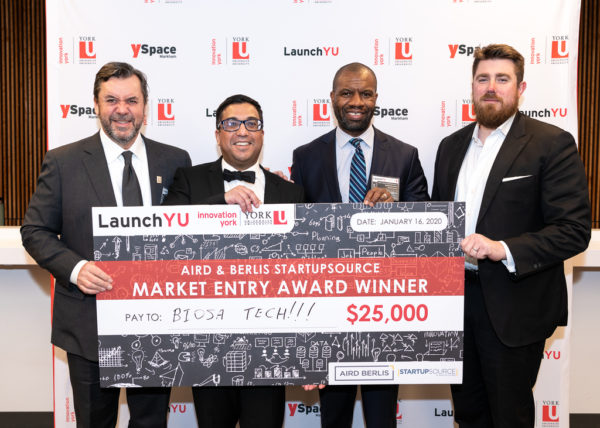 BIOSA Technologies was founded by Nicholas Ledra, who grew up in Markham and came from five generations of entrepreneurs. While creating a business was initially far from his mind, he eventually realized it was a natural calling for him.

Ledra’s company has found a way to optimize enzymes. Different industries use various types of enzymes, including food, beverage and pharmaceutical companies, but enzymes have limited shelf life and need to be frozen in order to be kept longer and then thawed. While many enzymes fail to survive this expensive process, BIOSA Technologies uses a technology which stabilizes the enzymes, resulting in a shelf life lasting more than one year and no requirement of freezing.

Since 2016, BIOSA Technologies has had successful experimental trials and collaboration with industrial and educational partners where their technology was used to extend the shelf life and efficacy of modified enzymes.

The Aird & Berlis StartupSource Market Entry Award was created by the Toronto legal firm in 2017, along with Partner Randy Williamson, who is a York University alumnus and a member of York University’s Board of Governors. He previously chaired York’s Pension Fund Board and the Endowment and Treasury Funds’ Investment Committee, along with chairing the York University Alumni Board.

Williamson is being honoured with Innovation York’s inaugural Partner of the Year Award which recognizes the outstanding contributions of an individual or organization to Innovation York and the growth of innovation at the university.

“We worked with York University to create the Aird & Berlis StartupSource Market Entry Award precisely to acknowledge companies like BIOSA, and York`s support for entrepreneurs like Nicholas Ledra,” said Williamson. “Nick and his team at BIOSA are ready to make a significant mark in their industry, and we’re delighted that the cash award and our ongoing legal support will help them do it. York University has been a wonderful partner to work with these last three years and I’m honoured to receive Innovation York’s first Partner of the Year award on behalf of my colleagues at Aird & Berlis LLP.”

“BIOSA Technologies was chosen as the winner of this award because of its solid market traction and the high number of possible applications related to enzyme stabilization is massive,” said York University’s interim vice-president of research & innovation, Rui Wang. “It is gratifying to see entrepreneurs taking Innovation York’s LaunchYU program, testing their ideas out and working to take them to market.”

The other two finalists in this year’s competition were Ayd Cares and SUKU Vitamins.

Ayd Cares helps more Canadians live independently with dignity and respect. This company offers in-home seniors care to those on the wait lists of retirement homes. Their unique platform allows retirement homes to serve a larger market and support seniors in need.

SUKU Vitamins is a health and wellness company offering an innovative line of supplements. Their company strives to innovate and provide the best products in terms of quality, efficacy and safety, which includes sugar-free, alcohol free, and plant-based vitamins.

#AYD Cares #BIOSA Technologies #BioTech #LaunchYU #SUKU Vitamins
StartUp HERE
Tweets by startuphereTO
"If you come to our studio and take a look at the people sitting around the table discussing ideas, they’re from almost every part of the world. I think it has really helped Umbra create an international style.”

Paul Rowan, Co-Founder, Umbra
“Something that makes Toronto truly unique is that willingness to share and communicate with people very openly inside the industry looking at the global pie as something we can all co-create and achieve together.”
Satish Kanwar, VP of Product, Acceleration, Shopify
"Startups in Toronto benefit from support at every stage. From the very early stage we have incubators, accelerators and seed stage investors. In the growth stage, we have funders willing to invest a lot of money to really help a company take-off. This gives tech companies in Toronto a huge advantage.”
Allen Lau, CEO & Co-Founder, Wattpad
"A culture of collaboration is really at the heart of what’s next in innovation. What’s exciting in Toronto is that we have local and international businesses partnering with the startup ecosystem and increasingly with the academic community to position themselves for success in the future. And it’s happening across the spectrum from digital media and information technology, to life sciences and healthcare, energy solutions and social innovation.”

Graham Kelly, Vice-President, Global Operations & Toronto Site, Bombardier Aerospace
“The scale and quality of meet-ups and conferences and speaking events have gone up dramatically. You don’t need to leave Toronto to build a successful company.”
Evgeny Tchebotarev, Co-Founder, 500px
“I think it’s an attractive place to come for talented people, it's a huge market for creative people and I think there are some companies emerging that give people hope that it can be done here.”
Mike McDerment, CEO/Co-Founder, Freshbooks
/