Prof. Graham Taylor, School of Engineering, has been selected by Google’s California head office as a visiting faculty member with the company’s team of artificial intelligence (AI) researchers in Montreal.

Beginning in September, Taylor, a machine learning expert, will spend an eight-month research leave with Google’s AI team in Montreal.

He plans to explore machine learning techniques intended to help improve decision-making by the AI systems in anything from Google Maps on your smartphone to smart tractors in the farm field.

Established to help further strengthen Canadian research in AI, Google’s Montreal team began in 2016. The company has since opened a research facility in Toronto.

In Montreal, he plans to combine deep learning methods with reinforcement learning techniques.

Most deep learning systems use supervised learning that gives the machine immediate feedback, he said. Supervised learning helps in solving perception problems that involve sensory information, such as recognizing images, speech or text.

Under reinforcement learning, the computer runs through a scenario such as learning to play a game. After being rewarded or penalized for repeated performances, the machine analyzes its experience to make better decisions. 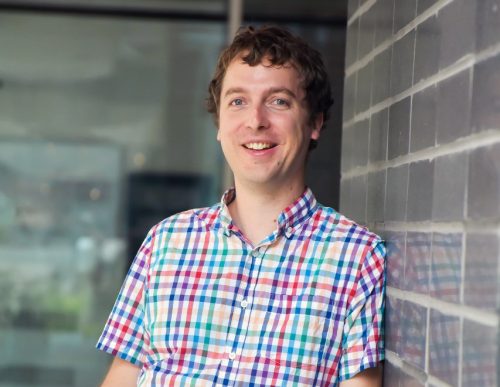 He said both kinds of learning are probably needed to help machines mimic the generalist thinking of the human brain. “We are amazing learners. By focusing on just one kind of learning, we’re never going to really narrow the gap between human- and machine-level performance.”

Earlier, Taylor worked with Google in California on a “continuous authentication” project to improve smartphone security.

He said many U of G engineering and computing graduates work with Google in California and Kitchener-Waterloo. He called his visiting professorship “an opportunity to strengthen our ties not only in Montreal but with the larger Google organization. It’s also a recognition of Guelph being world-class in AI.”

Taylor is the sole U of G member of the Vector Institute for Artificial Intelligence in Toronto. He’s academic director of NextAI, a Toronto accelerator for AI-enabled ventures.

In 2016, he was named as an Azrieli Global Scholar in the Learning in Machines and Brains program run by the Canadian Institute for Advanced Research.

#AI #Google #University of Guelph
StartUp HERE
PARTNERS
Tweets by startuphereTO
Tweets from @startuphereTO/suhto-partners
“In Toronto, Bombardier manufactures business and commercial aircraft and relies on the diversified, local regional supply chain. We work with more than 70 suppliers located in the Greater Toronto Area and we benefit from a variety of expertise going from complex machining to systems integration.”

Dr. Ilse Treurnicht, CEO, MaRS Discovery District
“Something that makes Toronto truly unique is that willingness to share and communicate with people very openly inside the industry looking at the global pie as something we can all co-create and achieve together.”
Satish Kanwar, Director of Product, Shopify
"If you come to our studio and take a look at the people sitting around the table discussing ideas, they’re from almost every part of the world. I think it has really helped Umbra create an international style.”

Dr. Rick Huijbregts, Vice-President, Industry Transformation, Cisco Canada
“I think it’s an attractive place to come for talented people, it's a huge market for creative people and I think there are some companies emerging that give people hope that it can be done here.”
Mike McDerment, CEO/Co-Founder, Freshbooks
“The scale and quality of meet-ups and conferences and speaking events have gone up dramatically. You don’t need to leave Toronto to build a successful company.”
Evgeny Tchebotarev, Co-Founder, 500px
/