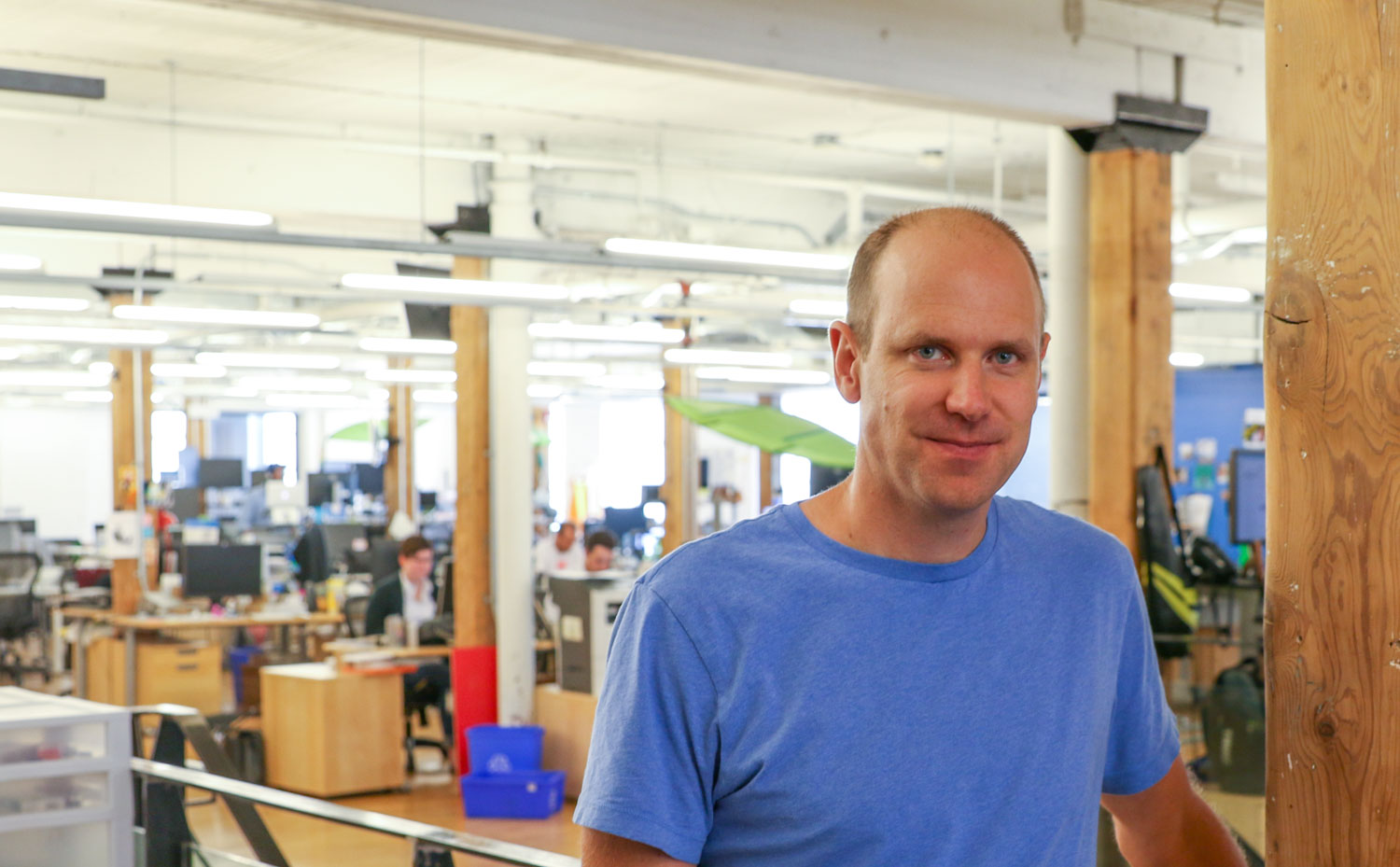 The industry predictions say that within five years 40 percent of the U.S. workforce will be self-employed, and FreshBooks is chasing that market with tools designed to make it easier to start, run and grow a business.

This week FreshBooks released one the biggest updates to its platform in the company’s history, optimizing for usability and simplicity. We had a chance to sit down with Mike on launch day at the company headquarters in Toronto where his 260 staffers were buzzing with excitement for the release.

This is a major change to a winning product. Was this a reaction to your users or a forward thinking move?

Very much forward thinking. For me I just felt there was so much more that we could do. I also thought that we could do what we were doing, but so much better. We had ridiculously high net promoter scores on the old FreshBooks classic product, but it didn’t matter to me because I knew it wasn’t what it could be.

It’s always a risk to update the entire product. You will inevitably have legacy users who are unhappy with the change.

Yeah that’s right and that’s why we give them the option, but I think over time people will be so compelled that they are going to move. We are already seeing people move way ahead of our schedule and staying at rates way higher than we anticipated, so we’re off to a good start.

Here’s the thing–we are a mission critical system for a lot of people. We are grateful that people trust us and we don’t want to undermine that trust by forcing them to switch one day. We are giving them the option to move when they are ready and that might me today, a month from now to two months from now.

SaaS, Cloud and Mobile weren’t around when you started. Your product is now built on these things, which you helped to pioneer – what is the next big change in your business?

One of the things we did today was just make the product easier to use–I think that’s actually one of the core innovations. There’s a lot of crappy software out there. Every year that goes by I actually think software and software design gets better, easier to user, more accessible, more appropriate to the end customer.

You may want some big grandiose idea for what the future holds but I actually think that every time software gets easier to use it becomes more accessible to more people. If you look at what’s driving the accelerated rate of adoption of software, it’s not just mobile phones, it’s the ease of use of the applications people are delivering on mobile phones. I think this is a big, massive step ahead for our category. I don’t think anyone has built anything nearly as easy to use and at the same time as powerful and appropriate for our target segment. A lot of SaaS products are targeted at large enterprise organizations, and for those products, you get into ease of use, benchmarking, layering in of data to be smarter.

I think ease of use is such a big deal. It’s so easy to underestimate the value of ease and simplicity.

You mentioned data, which has become the biggest growth segment in the industry. I imagine the small-to-mid sized companies using FreshBooks are interested in data a lot more now as well.

To be honest I think ease of use if a bigger deal than data. The number of people who are still using Word and Excel is huge because they tried accounting software and it was just too hard and there are a huge number of other categories that are just like this.

What gets interesting are the possibilities. Whether the data is exposed or we use it to deliver better & better experiences based on how we see people using our platform, that’s powerful because we can use it to make things easier. That’s one of the really unique things about SaaS versus desktop installed software is you can actually look for patterns in your products and drive better results for them and for your business as well based on that.

You have been in Toronto since you started. At this size and scale with so many U.S. clients, does it make sense to have a presence in San Francisco?

Can I flip it around and ask why?

I expected an answer like that. Have you seen any draw-backs to staying here, simply from an image perspective?

I think it really depends on who your customers are. Our customers are folks who work from their home or have their own offices, and it’s more important that we communicate with them in a way they feel is relevant than it is to have an office in their city.

We believe if we do that then yes we become the new standard for our segments, but we also build a global technology company headquartered in Toronto, and that is a pretty cool leave-behind.

There is no need for us to have multiple locations at this time. You can get on a plane and go to partner meetings. We work with Apple, we work with Google, we work with GoDaddy, name the biggest companies in technology and small business and we work with them, and so Toronto hasn’t really limited our ability to do that.

You have resisted major investment until recently. Why the change?

I think a lot of people think money solves problem that it doesn’t solve. They think “if I have money I’m set up” so they make it the first goal–I’m not wired like that. I like to invest in something with substance where I can see the next milestones, and so maybe it makes sense at accelerating our way at getting there or what have you. Long story short I basically got all the things done on my list and the only thing holding us back was just capital, so we raised some.

A lot of tech companies put a major emphasis on the employee experience. You have been in the media for the creative ways that you engage your staff. What is working for you here?

It’s very hard to put your finger on what drives success in culture other than you hire the right people and you reinforce the right behaviors. Those are the two most important things.

Having a mission that matters is a really big deal. We believe the world is not built for self-employed people–our mission is to reshape the world to suit their needs.

Everyone spends their first month in customer service at FreshBooks, so even if you’ve never had exposure to small business before, you realize “wow there’s a lot of great people out there doing their best but they’ve got a whole bunch of other problems.” If we can make this thing simple for them, that is actually massive.

We do work that’s important. It sounds to trite but in our own way, and at a pretty massive scale, we are changing the world for a lot of people and changing a lot of lives for the better.

How are millennials pushing you to think beyond the ping pong table?

To be honest I don’t think it matters what generation you are in–being a part of a mission that matters is key. The “millennial” generation has even higher expectations around getting up every day to do something that has purpose – about making a difference in the world and the need to see how their work does that.

I really believe that one of the great gifts the millennial generation is going to give to leaders across the world is forcing them to raise their game and make sure we are doing work that matters.

It’s not just about turning a profit or being number one – it has got to be more than that.

You have been doing this for over a decade and now run a business with 260 people. Have you found work-life balance?

Someone said to me recently in a way that was very compelling to me: The goal is not balance. The goal is integration. Sometimes I work outside of office hours, but sometimes I’ll take office hours to do something that isn’t related to work.

When I think about work-life balance now I think about energy and mindfulness which are different things altogether. It’s not just about balance, it’s about being present wherever I am at all times and making the investments in myself to make sure I can do that. It’s a little next level.

This interview has been edited and condensed for clarity.

#Freshbooks #Startup News #Toronto
StartUp HERE
PARTNERS
Tweets by startuphereTO
Tweets from @startuphereTO/suhto-partners
"If you come to our studio and take a look at the people sitting around the table discussing ideas, they’re from almost every part of the world. I think it has really helped Umbra create an international style.”

Paul Rowan, Co-Founder, Umbra
“The scale and quality of meet-ups and conferences and speaking events have gone up dramatically. You don’t need to leave Toronto to build a successful company.”
Evgeny Tchebotarev, Co-Founder, 500px
“I think it’s an attractive place to come for talented people, it's a huge market for creative people and I think there are some companies emerging that give people hope that it can be done here.”
Mike McDerment, CEO/Co-Founder, Freshbooks
“In Toronto, Bombardier manufactures business and commercial aircraft and relies on the diversified, local regional supply chain. We work with more than 70 suppliers located in the Greater Toronto Area and we benefit from a variety of expertise going from complex machining to systems integration.”

Dr. Ilse Treurnicht, Former CEO, MaRS Discovery District
"Startups in Toronto benefit from support at every stage. From the very early stage we have incubators, accelerators and seed stage investors. In the growth stage, we have funders willing to invest a lot of money to really help a company take-off. This gives tech companies in Toronto a huge advantage.”
Allen Lau, CEO & Co-Founder, Wattpad
“Something that makes Toronto truly unique is that willingness to share and communicate with people very openly inside the industry looking at the global pie as something we can all co-create and achieve together.”
Satish Kanwar, VP of Product, Acceleration, Shopify
/