U of T researcher Patricia O’Campo and her team are adding new safety planning content to their WithWomen Pathways app in response to a rise in partner violence during the pandemic (photo by David Lee)
The novel coronavirus has killed more than 300,000 people worldwide and caused a major downturn in the global economy. But the pandemic is causing harm in less widely reported ways, too. 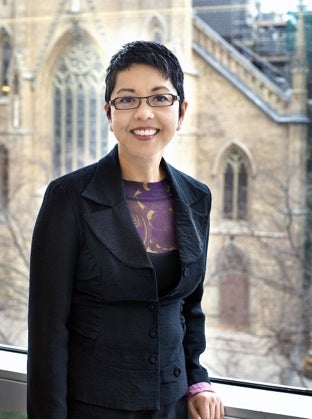 Since March, Canada has seen a significant increase in calls to police, women’s shelters and other social services due to a rise in domestic violence, says Patricia O’Campo, a professor at the University of Toronto’s Dalla Lana School of Public Health and interim executive director at the Li Ka Shing Knowledge Institute at St. Michael’s Hospital. The federal government has found evidence of a 20 to 30 per cent increase in domestic violence in some regions.

Even before the pandemic, partner violence affected an estimated one in three women in Canada in their lifetime – higher than the prevalence of each of diabetes, heart disease and breast cancer among women.

O’Campo, who has conducted research into partner violence for 25 years, says she can’t recall such a rapid rise in the number of women seeking help.

“There have been increases before during economic downturns, but not of this magnitude,” she says.

She recently addressed the subject during a webinar organized by CanCOVID – a cross-Canada network of more than 2,000 scholars conducting research into COVID-19. The series of half-hour webinars, which launched in April, occur twice a week and are invite-only. However, the public can view the talks on YouTube a few days after they occur.

O’Campo believes additional stress on households is driving the increase in partner violence. The Canadian economy has shed more than three million jobs since February, and people earning the lowest wages are the most likely to have become unemployed. Children are home from school and families have been asked to stay inside except for essential needs or for daily exercise.

The situation is especially worrying, according to O’Campo, because more women are seeking help at a time when shelters are full and social services have been reduced due to the pandemic. As well, youth experiencing domestic abuse often seek help at school from friends and teachers – a source of support that is now closed.

“How do we reach women and children at risk?” she asks.

Technology offers a possible solution. O’Campo is working with members of her research team and community service providers to modify a smartphone app called WithWomen Pathways, which they developed last year for women at risk of partner violence.

“One of the limitations of the existing app is that there is no content about safety planning during a public health emergency,” O’Campo says, referring to steps women can take to ensure they and their children are safe from a domestic abuser.

Hence, O’Campo and her team plan to devise new safety planning content after seeking input from women who themselves have experienced abuse. Then they will swap out the app’s old safety content and promote the modified app to women at risk and to service providers. O’Campo expects the process to take about four weeks once the necessary funding is in place.

While O’Campo hopes the app will help women during the pandemic, she nevertheless calls it a Band-Aid solution.

“We need to get to the root causes,” she says. “We have to disrupt the cycle of violence. We have to help men break that cycle.”

#Mobile #WithWomen Pathways
StartUp HERE
Tweets by startuphereTO
"Startups in Toronto benefit from support at every stage. From the very early stage we have incubators, accelerators and seed stage investors. In the growth stage, we have funders willing to invest a lot of money to really help a company take-off. This gives tech companies in Toronto a huge advantage.”
Allen Lau, CEO & Co-Founder, Wattpad
“I think it’s an attractive place to come for talented people, it's a huge market for creative people and I think there are some companies emerging that give people hope that it can be done here.”
Mike McDerment, CEO/Co-Founder, Freshbooks
“In Toronto, Bombardier manufactures business and commercial aircraft and relies on the diversified, local regional supply chain. We work with more than 70 suppliers located in the Greater Toronto Area and we benefit from a variety of expertise going from complex machining to systems integration.”