Toronto-based Kepler Communications designs, builds and launches satellites. Each one weighs about 10 kilograms and is about the size of a loaf of bread. (Laura MacNaughton/CBC)

This story is part of Moon Landing: 50th Anniversary, a series from CBC News examining how far we've come since the first humans landed on the moon.

Fifty years after Apollo 11, the space race has changed from a Cold War, state-funded contest to privately backed economic competition as companies and venture capitalists race to snag their piece of the universe's next great business opportunity, one that some suggest could one day be worth $1 trillion US per year.

Elon Musk's SpaceX, Jeff Bezos's Blue Origin and Richard Branson's Virgin Galactic garner an outsized number of headlines, but they're just the big names. According to Space Angels, a venture capitalist group specializing in space startups, the number of privately funded space companies has grown to 375, a near 14-fold increase since 2000.

Space Angels says those companies have raised a total of nearly $19 billion US in private capital, a number which may be conservative given many venture capitalists don't like to publicize the size of their investments.

Stewart Bain is co-founder and CEO of Montreal-based NorthStar Earth & Space Inc. The company is creating a constellation of satellites to monitor Earth and its orbit. (Joe Fiorino/CBC)

NorthStar is one of several high-tech Canadian space-focused companies with projects either online or coming online in the coming months. The Montreal-based company is creating a system of satellite-based hyper-spectral, infrared and optical sensors to continuously monitor and analyze Earth's orbit. Think of it as kind of a space version of an air traffic control system.

“You're not going to have a $1 trillion space economy and commercialize space if everybody's worried that there's a one-in-1,000 chance that my satellite's going to get knocked out of space by a piece of debris moving at 15 kilometres per second,” said Bain.

According to a March 2019 report by Research and Markets, more than 3,300 commercial satellites over 50 kilograms will be launched between 2018 and 2027. 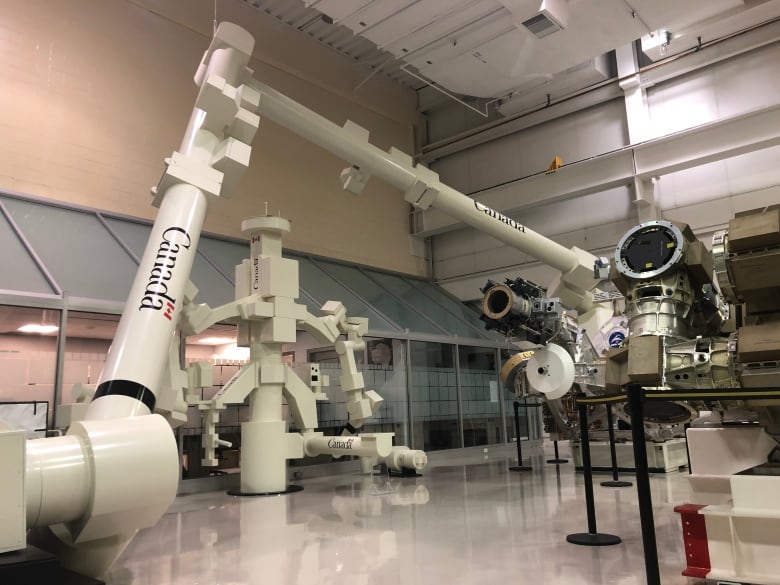 Few items are more iconic to Canada's space legacy than the Canadarm, shown at the Canadian Space Agency in Montreal. (Laura MacNaughton/CBC)

Toronto-based Kepler Communications has two small satellites in space — launched on Chinese and Indian rockets — with plans to add 138 more within three years, moving massive amounts of data quickly, even in the most remote regions of the planet.

“You can think of it like routers in space,” says Mina Mitry, Kepler's co-founder and CEO.

Kepler's satellites weigh about 10 kilograms and are about the size of a large loaf of bread.

Miniaturization of components makes satellites lighter and therefore less expensive to send to orbit. The cost to launch a satellite ranges between $30,000 and $50,000 US per kilogram.

“The reduction in cost of accessing space and the reduction in regulatory burden to be able to access space are all making for a perfect storm to make a new form of space access,” says Mitry.

Mitry says Canada is well positioned to make inroads in space thanks in part to a highly educated high-tech workforce.

“We're very fortunate to be based here in Toronto with marquee access to talent from the University of Toronto, from Waterloo university, from McMaster and all these neighbouring universities that feed directly into our business.” 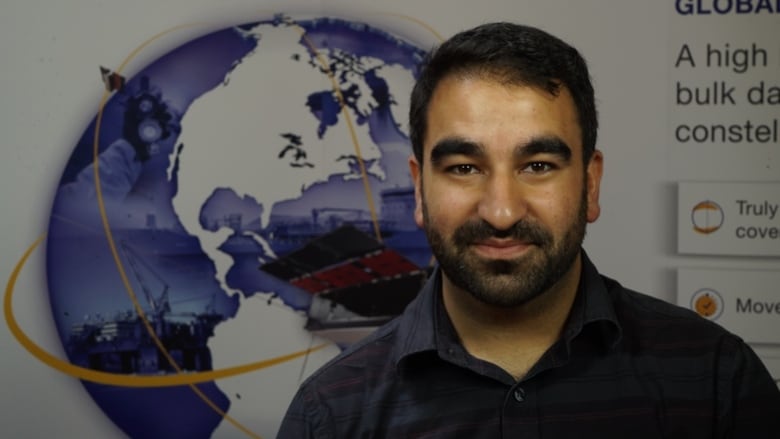 Mina Mitry is co-founder and CEO of Kepler Communications. His company has two satellites in space and says they will add 138 more by 2022. (Joe Fiorino/CBC)

Lack of available high-tech talent is one of the hurdles faced by space companies in other countries, he says.

“Space commercialization in Canada has traditionally been more latent than other countries, but now it is starting to ramp up,” says Mendes. 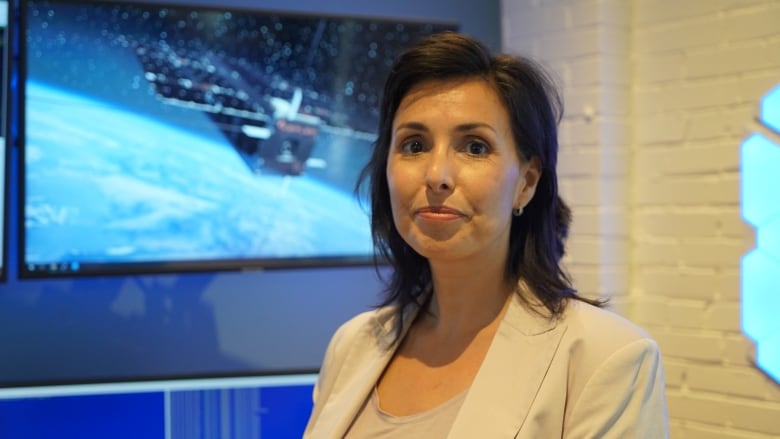 Michelle Mendes is the executive director of Satellite Canada Innovation Network, a non-profit organization that promotes Canada's space industry. She says a lot of that sector's growth is driven by Canada's high-tech expertise. (Joe Fiorino/CBC)

She says the U.S. and Europe are well ahead when it comes to commercial space ventures, with China and India also strong. But Canada is making inroads.

“We are at the beginning, but there is some good technology coming out of Canada, particularly because of the research and development support that Canada provides,” she says.

But those numbers are actually smaller than they used to be.

“Unfortunately the latest studies showed that there was a minus seven per cent increase over last five years,” says Mendes, who says the drop is entirely related to a drop in space funding from the federal government.

Canada spends very little on its space program compared to other nations, in dollars and relative to GDP. 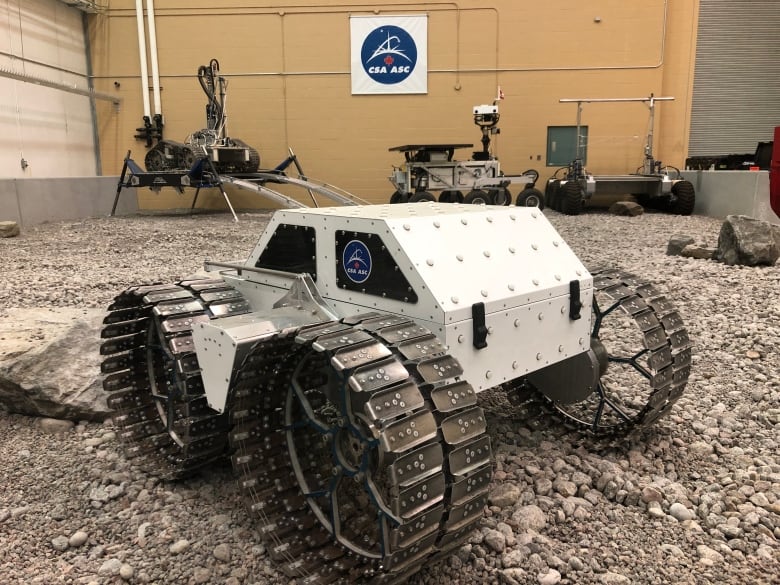 This year, India increased its budget for space by 11 per cent to $1.8 billion

More and more though, the torch is being passed to private industry.

“The new space economy, this offers us additional opportunities to use more and more of the private sector to do activities that were traditionally done by space agencies around the world,” says Martin Hébert, director of technology and science development at the Canadian Space Agency. 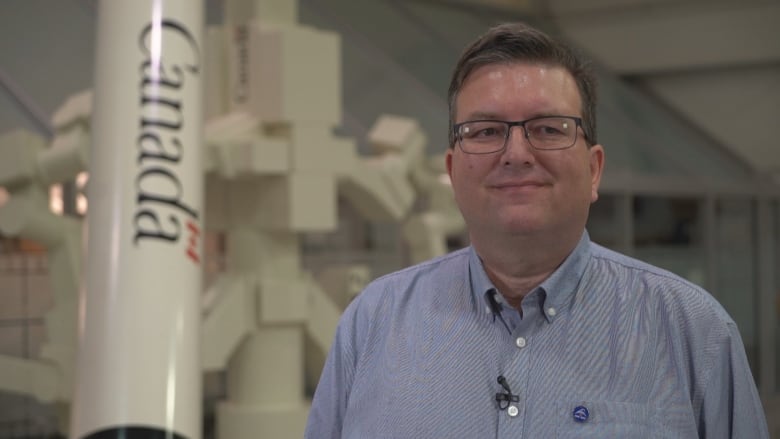 Martin Hébert, director of technology and science development at the Canadian Space Agency, says private companies are picking up activities that used to be done by government agencies. (Joe Fiorino/CBC)

It's an opportunity and a responsibility Canadian companies are happy to take on.

In a sense, he says, the passing of that torch began with Apollo 11.

“I work in space because somebody decided that the United States needed to go to the moon,” he says.

“It inspired a generation to do something in outer space.”

#Aerospace #Kepler Communications #NorthStar Earth & Space
StartUp HERE
Tweets by startuphereTO
"A culture of collaboration is really at the heart of what’s next in innovation. What’s exciting in Toronto is that we have local and international businesses partnering with the startup ecosystem and increasingly with the academic community to position themselves for success in the future. And it’s happening across the spectrum from digital media and information technology, to life sciences and healthcare, energy solutions and social innovation.”

Graham Kelly, Vice-President, Global Operations & Toronto Site, Bombardier Aerospace
“Something that makes Toronto truly unique is that willingness to share and communicate with people very openly inside the industry looking at the global pie as something we can all co-create and achieve together.”
Satish Kanwar, VP of Product, Acceleration, Shopify
“The scale and quality of meet-ups and conferences and speaking events have gone up dramatically. You don’t need to leave Toronto to build a successful company.”
Evgeny Tchebotarev, Co-Founder, 500px
"Startups in Toronto benefit from support at every stage. From the very early stage we have incubators, accelerators and seed stage investors. In the growth stage, we have funders willing to invest a lot of money to really help a company take-off. This gives tech companies in Toronto a huge advantage.”
Allen Lau, CEO & Co-Founder, Wattpad
/