Ample Labs is a non-profit empowering those of us who are experiencing homelessness through technology. Their founder, CG Chen shares how the company’s journey is going so far and her tips for supporting your LGBTQ+ employees!

People don’t just end up on the street, there’s a story. I met amazing people – I met doctors, entrepreneurs, people who used to have a lot of money.

About a year and a half ago, CG and a handful of friends started Ample Labs out of a condo room with the vision of building on the sandwich runs they had completed during their undergrad.

As she started working in the tech sector, CG was very conscious of the issue of homelessness and really started to think about what they could do.

Then something unexpected happened that solidified the course of Ample Labs.

“One of our friends, our team members, was laid off twice and got evicted as a result. This is something none of us saw coming. He ended up basically homeless and he was going to move in and sleep on the couch in my living room.”

Nearly 1 in 10 Canadians have experienced hidden homelessness, forced to temporarily live with friends, family or in their car because they have nowhere else to go.

After the eviction, her friend reached out to CG Chen to see if she could figure out the next steps and where he could get help.

Although Google is great for certain things, CG found it extremely difficult to find answers to some of the very complex questions. “I’m literally thinking if this is this hard for me and I’m not even in this situation, I can’t even picture my friend going through this,” she said.

During her experience, she was struck by an idea which could change the lives of homeless people for the better: “What if you could just ask a chatbot a question and it could answer it and help you?” 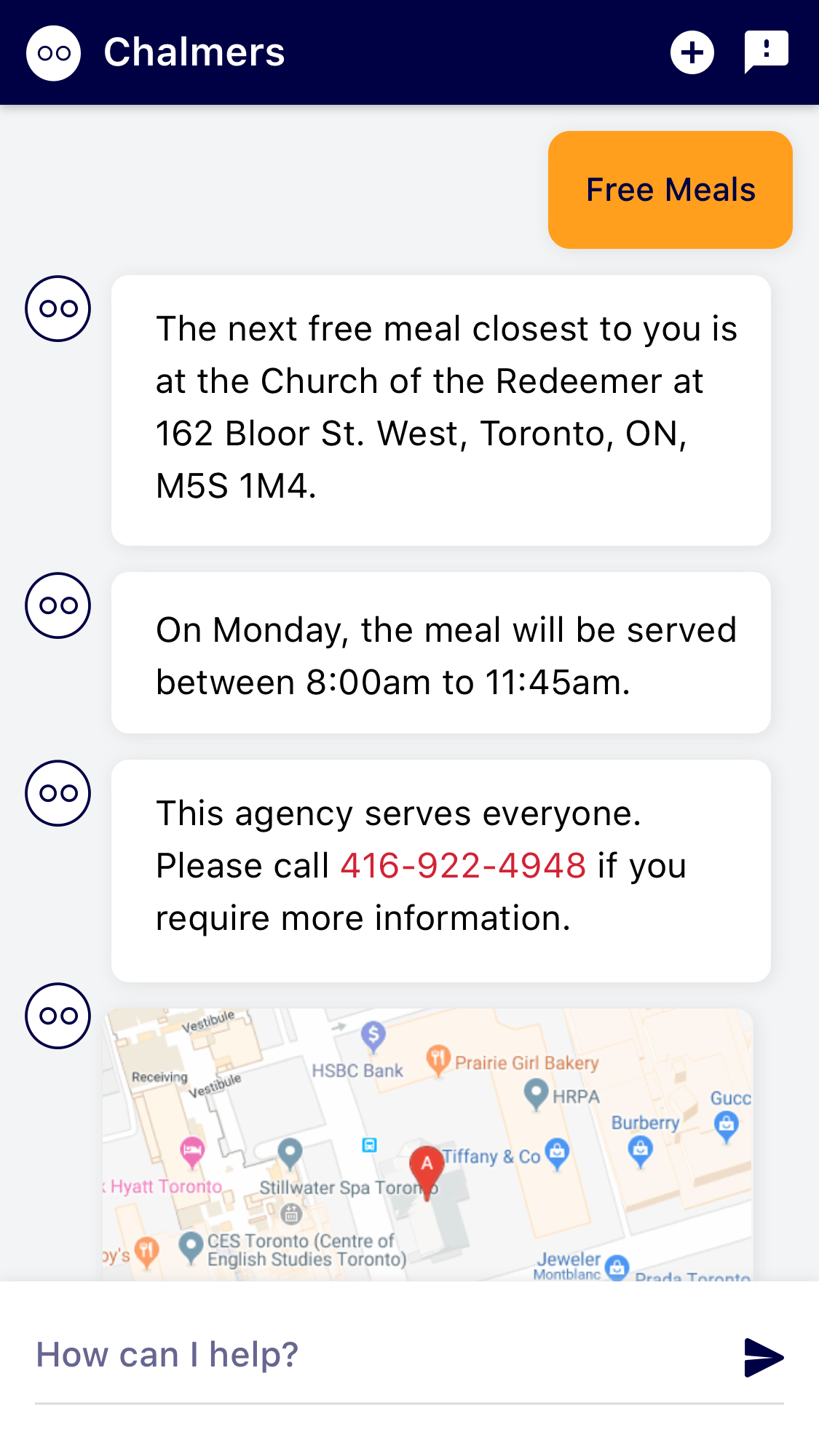 One of the most common questions CG and her team hears is: “How could someone who is experiencing homelessness afford a mobile phone?”

“The myth that they don’t have phones is simply not true. We found this through secondary research and now primary. We’re doing that here in Toronto and in Canada because there’s no academic journal or research that suggests that,” CG explains.

During the team’s research with the community, they learned there is a lot of shame and guilt associated with being homeless. Because of this, 50% of people turn to the internet instead of other people.

Working with the City of Toronto, CG confirmed how difficult it was for people to find information. During winter, when it’s -20C, finding this information could be a matter of life or death.

It takes a village

Given the high level of interest from volunteers, CG and her team realized that there would probably be plenty of people in the city who believe in their mission and would like to contribute.

“We decided to do a crowdfunding campaign to get people in the industry thinking about how we can use technology in a different way to tackle a very complex social problem.” 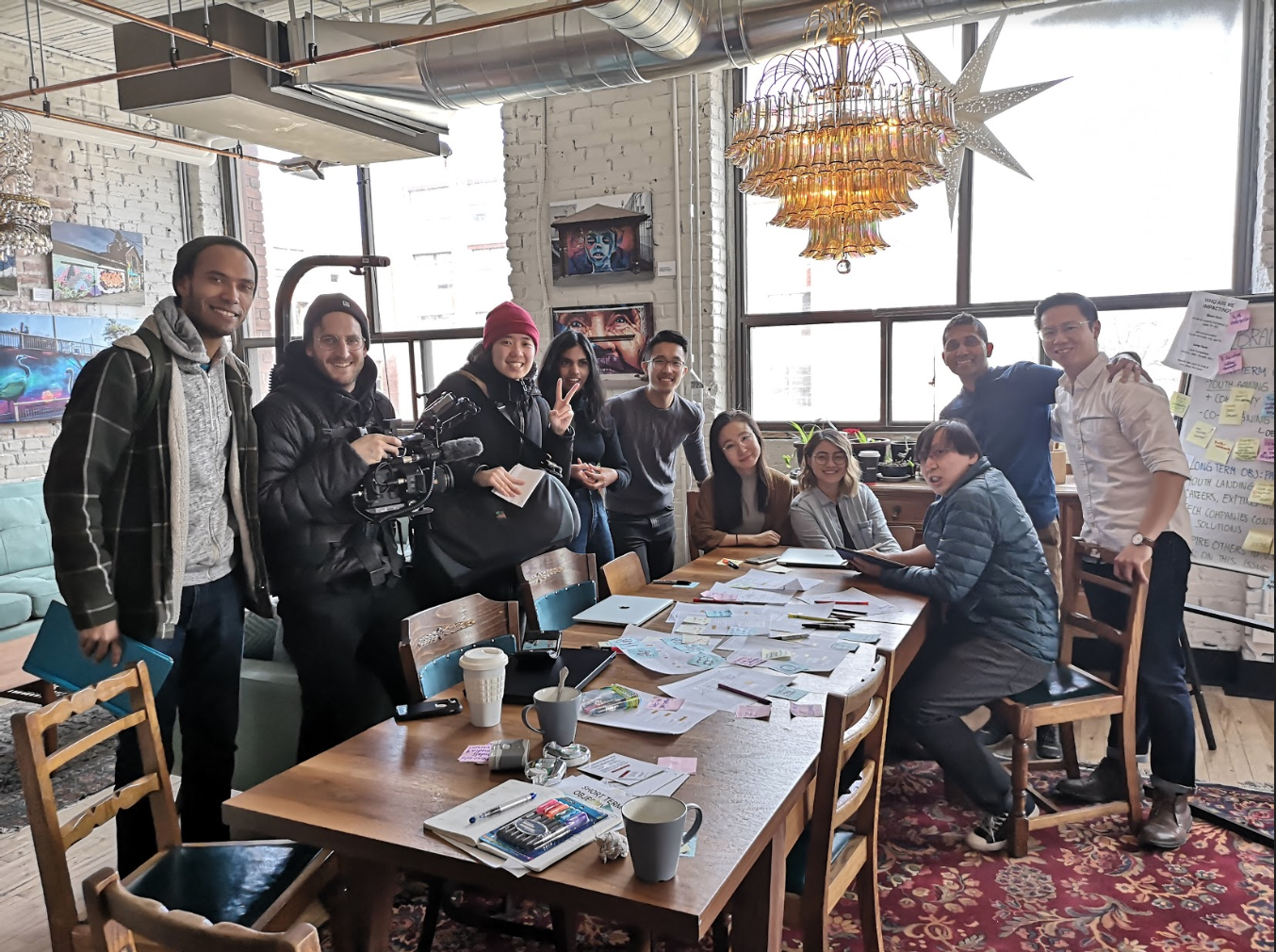 “We made it very intentional that 50% of the funds would go directly to people who are experiencing the problem.”

Although June 14th was officially the last date of the campaign because the goal was exceeded, Indiegogo has highlighted it as a campaign that’s in demand so people can still donate!

CG personally identifies as part of the LGBTQ+ community and there are many people on her team who identify. She shared some of her advice for ensuring people have rewarding experiences in your organizations.

1. Invest in your people

CG is admadant about the power of investing in people from the LGBTQ+ community. She also shared that when you look at youth who are experiencing homlessness, approxiamtely 40% of them identify as LGBTQ+. “I think this is a community that just faces a lot of barriers period, whether it’s biases or workwise.”

Something that CG learned from a mentor who really moved the dial for her was the importance of investing in your people. “He would tell me he would hire people who weren’t doing that well in their lives so that his company could give them an opportunity.”

CG recommends giving space to allow the opinions of your LGBTQ+ employees to be shared, lifted and amplified, as opposed to projecting what you think on them. Increase your empathy and your ability to listen to communities that you might not be familiar with.

“You can be very intentional about how you recruit, who you hire and what types of training you provide your employees with,” said CG. By being focused on education, you can help remove unconscious biases and help other employees become better allies.

“I would say when it comes to the individual, it’s investing in them and investing in understanding and de-mystifying it for other people.” CG applies this advice to people who are experiencing homelessness too.

She spoke of how she was amazed at the kind-heartedness, resilience and strength of people who have gone through different episodes and lengths of homelessness.

“I encourage everyone to remove the stigma by taking the time to talk to the people you pass on the street. I think the work we do at Ample Labs can push people to do that more.”

Read all
Communitech: Ask Me Anything Sessions: PR 101 for Startup and Scale-ups

##MoveTheDial #Ample Labs
StartUp HERE
PARTNERS
Tweets by startuphereTO
Tweets from @startuphereTO/suhto-partners
“In Toronto, Bombardier manufactures business and commercial aircraft and relies on the diversified, local regional supply chain. We work with more than 70 suppliers located in the Greater Toronto Area and we benefit from a variety of expertise going from complex machining to systems integration.”

Graham Kelly, Vice-President, Global Operations & Toronto Site, Bombardier Aerospace
“I think it’s an attractive place to come for talented people, it's a huge market for creative people and I think there are some companies emerging that give people hope that it can be done here.”
Mike McDerment, CEO/Co-Founder, Freshbooks
“Something that makes Toronto truly unique is that willingness to share and communicate with people very openly inside the industry looking at the global pie as something we can all co-create and achieve together.”
Satish Kanwar, Director of Product, Shopify
"A culture of collaboration is really at the heart of what’s next in innovation. What’s exciting in Toronto is that we have local and international businesses partnering with the startup ecosystem and increasingly with the academic community to position themselves for success in the future. And it’s happening across the spectrum from digital media and information technology, to life sciences and healthcare, energy solutions and social innovation.”

Dr. Rick Huijbregts, Vice-President, Industry Transformation, Cisco Canada
“The scale and quality of meet-ups and conferences and speaking events have gone up dramatically. You don’t need to leave Toronto to build a successful company.”
Evgeny Tchebotarev, Co-Founder, 500px
"Startups in Toronto benefit from support at every stage. From the very early stage we have incubators, accelerators and seed stage investors. In the growth stage, we have funders willing to invest a lot of money to really help a company take-off. This gives tech companies in Toronto a huge advantage.”
Allen Lau, CEO & Co-Founder, Wattpad
"If you come to our studio and take a look at the people sitting around the table discussing ideas, they’re from almost every part of the world. I think it has really helped Umbra create an international style.”