RBC is launching an accelerator through its new venture arm, RBC Ventures, in partnership with Highline BETA, BetaKit has learned.

The accelerator, called RBC Reach, will run several cohorts a year, with each focusing on a specific theme. Participants will get access to office space in Toronto’s financial district, and receive an initial investment of $100,000 from Highline BETA and RBC.

Participants will get access to office space in Toronto’s financial district, and receive an initial investment of $100,000 from Highline BETA and RBC.

“As accelerator leaders and investors at HIGHLINE.vc, we saw firsthand the value that commercial relationships with large corporations can drive for startups,” Marcus Daniels, founding partner at Highline BETA, told BetaKit. “At Highline BETA we’ve also brought this experience to the other side of the table, helping our corporate partners speed paths to a partnership, investment, or launch. By bringing together the best that both startups and the enterprise have to offer, we can help both to build better ventures.”

RBC Reach is looking for companies at the post-seed and pre-Series A stage. Applications to the accelerator are due August 31, and can be submitted to the new RBC Ventures website. 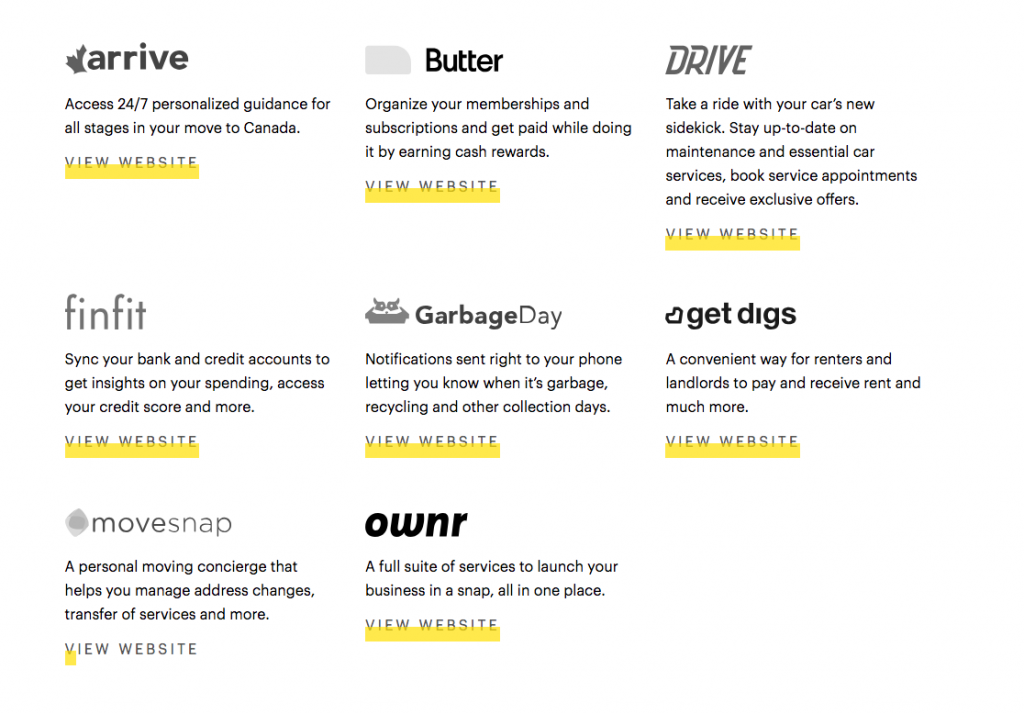 The companies currently listed on the new RBC Ventures website.

RBC announced the launch of RBC Ventures earlier this month at the bank’s investor conference. The website lists some of the companies it has co-created in-house, including Butter, a subscriptions and memberships hub led by RedFlagDeals founder Derek Szeto; and Arrive, which helps immigrants navigate the process of moving to Canada.

Highline BETA announced it would work with RBC back in December 2017, and while full details on the nature of the partnership weren’t released, it was made to support RBC’s internal efforts towards new venture development.

“RBC is working with Highline BETA to take a startup-centric approach to tackle some of the most interesting opportunities to serve clients,” Mike Dobbins, chief strategy and corporate development officer at RBC, said at the time of the announcement. “By embracing the co-creation model championed by Highline BETA, we believe RBC can blend our own intrapreneurs who have a deep understanding of consumer and industry challenges with entrepreneurs who bring fresh ideas and perspectives to accelerate our innovation and growth.”

#Highline BETA #RBC #RBC Reach
StartUp HERE
Tweets by startuphereTO
“The scale and quality of meet-ups and conferences and speaking events have gone up dramatically. You don’t need to leave Toronto to build a successful company.”
Evgeny Tchebotarev, Co-Founder, 500px
“Something that makes Toronto truly unique is that willingness to share and communicate with people very openly inside the industry looking at the global pie as something we can all co-create and achieve together.”
Satish Kanwar, VP of Product, Acceleration, Shopify
"A culture of collaboration is really at the heart of what’s next in innovation. What’s exciting in Toronto is that we have local and international businesses partnering with the startup ecosystem and increasingly with the academic community to position themselves for success in the future. And it’s happening across the spectrum from digital media and information technology, to life sciences and healthcare, energy solutions and social innovation.”

Paul Rowan, Co-Founder, Umbra
"Startups in Toronto benefit from support at every stage. From the very early stage we have incubators, accelerators and seed stage investors. In the growth stage, we have funders willing to invest a lot of money to really help a company take-off. This gives tech companies in Toronto a huge advantage.”
Allen Lau, CEO & Co-Founder, Wattpad
“I think it’s an attractive place to come for talented people, it's a huge market for creative people and I think there are some companies emerging that give people hope that it can be done here.”
Mike McDerment, CEO/Co-Founder, Freshbooks
“In Toronto, Bombardier manufactures business and commercial aircraft and relies on the diversified, local regional supply chain. We work with more than 70 suppliers located in the Greater Toronto Area and we benefit from a variety of expertise going from complex machining to systems integration.”